Fr. Theodore Zisis: “We are not calling for a schism” 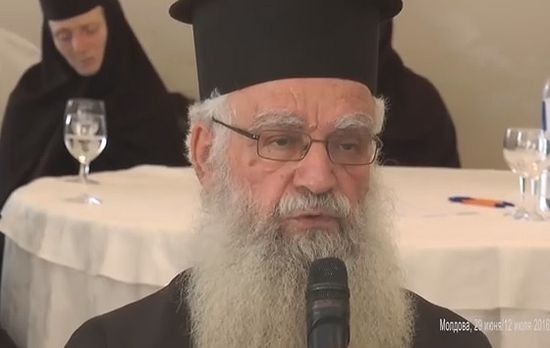 Fr. Theodore Zisis, a priest of the Thessaloniki Diocese of the Greek Orthodox Church who came under fire in March when he announced that he was ceasing commemoration of his hierarch Metropolitan Anthimos of Thessaloniki for his support of 2016’s Crete Council, which has been derided as ecumenistic by hierarchs, clergy, and monastics from throughout the Orthodox world, has made a statement clarifying that he and others who have taken the same step have no intention to enter into or create a schism within the Body of Christ, reports Hodigitria.

“For the sake of rebutting the malicious slander spread against us, and to calm those who want to hear our official explanation, we declare that we know how horribly evil is schism, which is not washed away even by martyr’s blood,” Fr. Theodore firmly stated.

However, an even greater evil from the ecclesiological point of view, Fr. Theodore goes on to explain, is heresy, which deprives a man of salvation.

“In ceasing commemoration of heretical bishops, we are protecting ourselves and the faithful from the pan-heresy of ecumenism, and we are not creating a schism, and not submitting to another non-canonical Church jurisdiction, and not commemorating other bishops during the services,” Fr. Theodore stated. He has been ordered not to serve and stripped of his honorary title of archpriest, but remains a cleric of the Thessaloniki Diocese.

As Fr. Theodore has often explained, his decision to cease commemoration was based on Canon 15 of the First-Second Council held in Constantinople in 861, presided over by St. Photios the Great. This canon states that if a bishop clearly preaches a heresy previously condemned by either a council or the holy fathers, then priests are allowed to cease commemorating him in the Liturgy, and are to face no canonical penalties.

The canon reads in part:

But as for those persons, on the other hand, who, on account of some heresy condemned by holy Councils, or Fathers, withdrawing themselves from communion with their president, who, that is to say, is preaching the heresy publicly, and teaching it barehead in church, such persons not only are not subject to any canonical penalty on account of their having walled themselves off from any and all communion with the one called a Bishop before any conciliar or synodal verdict has been rendered, but, on the contrary, they shall be deemed worthy to enjoy the honor which befits them among Orthodox Christians. For they have defied, not Bishops, but pseudo-bishops and pseudo-teachers; and they have not sundered the union of the Church with any schism, but, on the contrary, have been sedulous to rescue the Church from schisms and divisions.

For a fuller explanation, see Fr. Theodore’s talk “Defense and Declaration of Cessation of Commemoration of Bishop On Account of the Teaching of Heresy.”

“We have done our duty, so our conscience is clear; in our decision we have walked the faithful path laid out by the holy apostles and holy fathers. We have fought and continue to fight against heresy as did they. We will return to the commemoration of our bishops when they publicly condemn the great heresy of ecumenism and proclaim the Crete ‘Council’ a robber council. Such is our position, and we will not deviate to the right or the left,” Fr. Theodore continued, explaining his desire to support the purity of the Orthodox faith while remaining “walled off” for the time being, but without entering into any kind of schism.

Quoting St. Theodore the Studite, Fr. Theodore ends saying, we “are not renegades from the Church of God; may this never happen with us! Although we are guilty of many sins, we are of one body with it and are nourished by the Divine dogmas, and we try to observe its rules and decrees” (Epistle to Monk Basil 1.76). New Book: “Following the Holy Fathers” by Protopresbyter Theodore Zisis soon available
According to Matushka Constantina, “This volume includes translations of articles taken from a number of Fr. Theodore’s publications. It is a collection of valuable scholarship covering both a broad range of Patristic figures dating from apostolic times to the present day, as well as a variety of themes.”