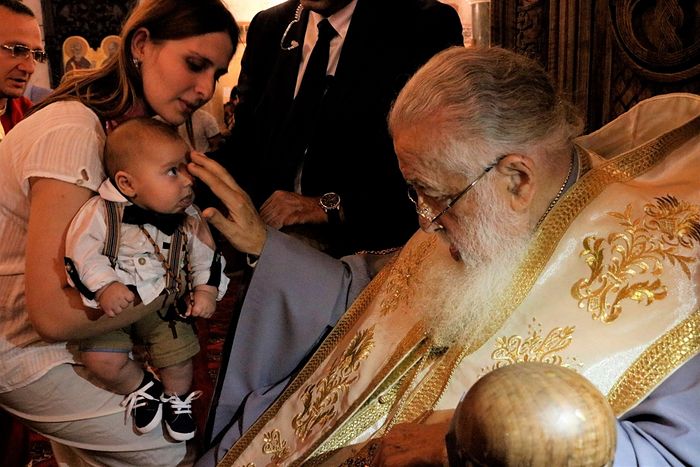 The celebration began in the second half of the day, after the morning Liturgy. His Holiness arrived to the cathedral around 8:00 PM to bless his new Godchildren, who all received official certificates and Baptismal crosses.

His Holiness now has 33,934 Godchildren.

The previous such Baptism was celebrated on November 23, in which over 600 children were baptized. Met. Onuphry of Kiev will baptize every fifth child in Orthodox families

Met. Onuphry of Kiev will baptize every fifth child in Orthodox families
His Beatitude Metropolitan Onuphry of Kiev and All Ukraine, the primate of the Ukrainian Orthodox Church, has responded positively to the idea of representatives of the clergy that he baptize newborns in large families. Patriarch Ilia II baptizes another 1,173 children
This past Sunday the holy Myrrhbearing Women were celebrated in all Orthodox churches throughout the world, and on the day of these holy women who became the first witnesses and heralds of the Lord’s Resurrection, more than 1,000 Georgian children were united to the risen Lord in the holy Sacrament of Baptism