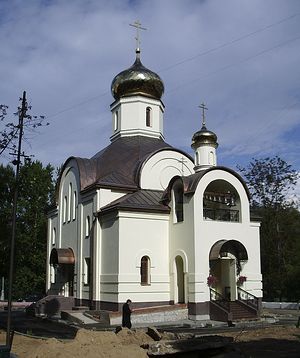 Photo: Wikipedia
The first church in Moscow named in honor of the holy Royal Martyrs—Tsar Nicholas II and his family—has been built in the Northern District, the press service of Duma Deputy Vladimir Resin, the supervisor of the capital program for the building of churches, reported to RIA-Novosti yesterday.

The church can accommodate 200 parishioners. The chapel on the site of its construction was laid in 2013, the 400th year of the House of Romanov. Grand Duchess Maria Vladimirovna Romanova later made a private visit to the construction site.

The parish’s website notes that the Royal Martyrs were chosen as the church’s patrons because many Christians in Russia today are turning to them in prayer to strengthen their families and for aid in raising their children in faith and piety, for preserving their purity and chastity, for help in school, and for the prosperity and revival of the Russian Fatherland.

The second step of the construction is currently underway—the building of a two-story parish house.

The program, “For the Construction of Orthodox Churches of Moscow” is also known as the “200 Program” due to the plans to build 200 new churches in Moscow.

There are currently only 16 churches in Moscow’s Northern District, which has a population of 1,161,000. It is planned to build another 27 churches, with work already begun on 6, and another 5 in the design stage. Foundation of Russian-Serbian church in Republika Srpska to be consecrated on centenary of Romanov martyrdom
The draft of the five-domed church with a steepled bell tower is based on the architectural style of an ancient Russian church. The church will have three altars: in the name of the Transfiguration, the Royal Martyrs, and Sts. Symeon and Sava of Serbia, the patriarchs of the Nemanji&#263; dynasty. Foundation stone of future chapel in honor of Royal Martyrs blessed in Canada
On August 6, during the patronal feast of the Church of the Smolensk Icon of the Mother of God in Jackson Point, Ontario, Canada, which celebrates its 60th anniversary this year, the foundation stone of a future chapel in honor of the holy Royal Martyrs was blessed.
Comments
×