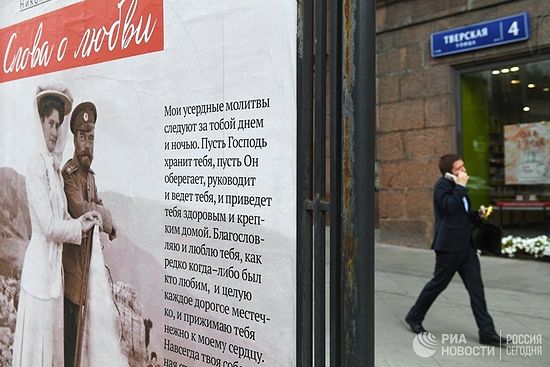 Billboards with quotations from the correspondence between the holy Royal Martyrs Nicholas II and Alexandra have appeared throughout Moscow, the Synodal Department for the Cooperation of the Church with Society and the Media stated on Tuesday, reports Interfax-Religion.

The quotes from the empress’ personal diary are part of the Church project “Nicholas II and Alexandra Feodorovna: Words of Love,” dedicated to love, marriage, and family happiness. The project is aimed at the affirmation of family values in Russian society, and to give the people truthful information on the life of the royal family, as opposed to the historical fiction being propagated by the soon-to-be-released film “Mathilde.”

“For more than 100 years, the personal life of the family of the last Romanovs have remained a target for myths and speculations. Meanwhile, the real story of their married life, based on faith, love, and mutual respect can serve as an example of family relations for our contemporaries,” the synodal department noted.

“My heartfelt prayers follow you day and night. May the Lord keep you, protect you, lead and guide you, and lead you home healthy and strong,” one of the billboards reads in part.

The Union of Orthodox Journalists reports that more than 300 billboards have been set up throughout the capital.

It is believed that the project “Nicholas II and Alexandra Feodorovna: Words of love” will become with time an example of an affordable and positive way to reveal unknown and forgotten pages of Russian history. New monument to Royal Martyrs opened in Diveyevo
A monument to the family of the last Russian emperor, the holy Royal Martyrs, created with people’s donations from across the country, opened today on the Holy Trinity Cathedral square at the St. Seraphim-Diveyevo Convent.
Comments
×