An Explanation of the Prayer of St. Ephraim the Syrian 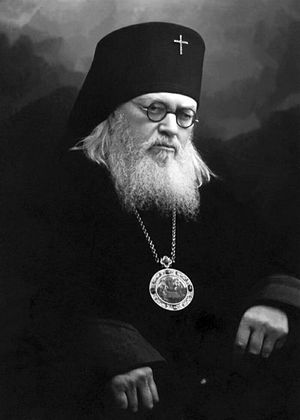 St. Luke Voino-Yasenestky (1877–1961), Archbishop of Simferopol and Crimea, was a great saint of our own times. A surgeon and medical scholar by profession, he became a bishop during fierce persecutions against the Church, knowing that his path would lead to prison and exile. His numerous works are preserved for us and inspire us in the spiritual life.

OrthoChristian.com will be posting an English translation of his explanation of the Prayer of St. Ephraim the Syrian in parts, so that during these early days of Great Lent we might discover new meaning and inspiration for our Lenten struggle in this prayer, repeated many times at every service.

O Lord and Master of my life! The spirit of idleness, despondency, ambition, and vain thoughts give me not! But rather a spirit of chastity, humble-mindedness, patience, and love bestow upon me Thy servant. Yea, O Lord King, grant me to see my failings and not condemn my brother, for Thou art holy unto the ages of ages. Amen!

This prayer penetrates the heart like none other, mysteriously acts upon it, and you feel a special, exceptional divine power in it. Why is that so? Because it was poured from a heart that was perfectly purified and holy, and from a mind that was enlightened by divine grace and had become a participant in the mind of Christ. It is short, but it nevertheless contains an enormous wealth of thoughts and feelings. Extraordinarily important is the very fact that St. Ephraim asks God to deliver him from everything unholy and repugnant to Him, and to vouchsafe him great virtues. Why does he ask for this?

There are people—and there were especially many during pagan times—who rely entirely upon themselves and think that everything is achievable through the powers of their minds and feelings. They do not understand that many things, in fact the most important, precious and cherished things, are not accessible to our minds and feelings. Whoever understands this understands what the apostle Paul said: For that which I do I allow not: for what I would, that do I not; but what I hate, that do I (Rom. 7:15).

Thus spoke the greatest and chief apostle, recognizing his powerlessness to walk the path of goodness, profoundly understanding that his flesh, which drags him down and hinders his heart’s ascent on high to God, has enormous power over him. He pined and suffered because he did not do the good that his soul desired, but did the evil that he did not want.

Every man has his own spirit—in his soul are the traces left by those vices in which he sins, as well as by the good that he does. It is much easier to be freed from individual vices than from the spirit of these vices. The latter is possible only gradually, with God’s help.

And so St. Ephraim the Syrian asks God not only to give him the spirit of virtues and deliver him from the spirit of his faults, but he asks that his soul would become fragrant with Christ.

“O Lord and Master of my life! The spirit of idleness give me not!” Why does St. Ephraim the Syrian begin his prayer with a request about idleness, as if there are no worse faults?

In observing idleness from the ordinary, everyday point of view we see that idleness is contemptible, and deserves all condemnation.

Idleness is a very dangerous vice, because it is the mother of many other vices. Idle people do not concentrate their thoughts on the profound seriousness of life, the huge responsibility that lies on them not only before people, but also before God Himself.

The idle person is a harmful member of society and state. Out of their laziness idle people are incapable of working, and fall into poverty. Because they are needy they demand not only what is necessary for life, but even pleasures that exceed the limits of what is necessary—luxuries, and so forth. And in order to get money they invent various other sinful means and become capable of every low thing: shadowy business, lies, deceit, and bribe-taking.

But even more destructive is idleness in spiritual life. We know that any of our abilities left without practice are eventually lost. If a musician who has achieved perfection in his playing abandons his music for many years he will lose that perfection. Without exercise, each organ of our body comes to a flaccid state and can’t operate. A person who always lies around loses the ability to walk. Whoever does not work with his hands brings his arm muscles to a state of flabbiness. The body’s strength wanes when physically inactive. The same can be said of the soul’s abilities. If a person does not pray he looses the ability to pray. Whoever does not watch after his spirit and heart will become dissolute in the spiritual sense.

The soul left without exercise becomes like a field that has not been cultivated for several years, overgrown with tall, useless weeds, thorns and thistles, and very hard to make fertile. Idleness of the soul, lack of practice in good deeds leads to the soul’s destruction, to an overgrowth in it of the weeds of sin.

Just the same, no matter how hard it may be this is not the worst problem. A much greater problem is that we lose days of spiritual activity—the short days of this life, given to us by God so that we might achieve a great and holy goal—to prepare ourselves for the Last Judgment. We must become worthy in God’s eyes so that He would not place us on His left side, saying, Depart from me, ye cursed, into everlasting fire, prepared for the devil and his angels (Matt. 25:41).

Do you know that all the saints who, it would seem, did not need labors and dedicated the whole time of their lives to spiritual podvigs, divided the day into three parts: one part was given to prayer, another to reading the Word of God, and another to work. They were all foreigners to idleness, considering it a great and destructive evil.

They chose various labors: weaving baskets and mats, gardening, chopping wood, and building cells, churches, and whole monasteries. They sold their handiwork in the nearby town, and fed both themselves and the poor. The holy apostle Paul preached the whole day through, and at night he made tents. He labored diligently by the light of the moon or lamps, considering labor to be mandatory for him. His main striving was to hasten as much as his strength allowed toward the mark—the Kingdom of God. He has these remarkable words: Brethren, I count not myself to have apprehended: but this one thing I do, forgetting those things which are behind, and reaching forth unto those things which are before (Philip. 3:13–14). This is an example of life contrary to the lives of idle people.

You can’t find a trace of idleness in the life of Apostle Paul, in the lives of the eremitic fasters, in monastic life, in the lives of great saints. They were all foreign to it, considering it a great and destructive evil. Remember that life is short, and we have to hurry like the apostle Paul to work for the Lord.

Church of the Joy of All Who Sorrow Icon, Michurinsk How to Maintain a Prayerful Spirit Throughout Lent?
Pastoral advice

How to Maintain a Prayerful Spirit Throughout Lent?
Pastoral advice
We are now in the fourth week of Great Lent, and many of us feel some cooling compared to the first days due to the hustle and bustle of everyday life. How can we keep a prayerful and focused spirit through the whole of Lent? How can we keep from losing the spiritual fruits acquired in the first days? Let Charity Be Obtained By Fervent Prayer
Fifth Homily on the Lenten Season
St. Augustine
Wherefore, those who refrain from flesh meat in order to seek other kinds of food more difficult to obtain and more costly make a great mistake. For this is not undertaking abstinence, but simply varying one’s luxury. St. Ephraim the Syrian
The prayer may be said to capsulize the teaching of this eloquent Holy Father of the Church, who left several volumes of spiritually instructive writings which merited high praise from his illustrious contemporaries, St. Basil the Great and his brother St. Gregory of Nyssa. The life of St. Ephraim is perhaps no less instructive.
Comments

Ted Bruckner12/31/2020 2:18 am
σωφροσύνης From σώφρων (sṓphrōn, “wise”) +‎ -σῠ́νη (-súnē) = wisdom This is being mis-translated as "chastity." Here's my literal translation of prayer of St. Ephraim: Lord and Despot of my life, do not give me the spirt of laziness, curiosity, love of power, and idle collection but spirit of wisdom, lowliness, patient endurance, and love grace me Your servant. Yes, Lord King, give me to perceive my offences/infractions of law and not to give judgment against my brother since [he] you shall speak well of into the ages of the ages. Amen. God Bless. Ted

Rdr Andreas &lt;oran3/6/2018 5:03 pm
I agree with Joseph - Orthodoxy does not know divisions among the faithful, and there is a vital relationship between those in the world, in parishes, and those in monasteries. Monasteries are the engine room of Orthodoxy.

Joseph3/5/2018 11:06 am
Afanassy: Don't laypeople also suffer from sloth, despair, lust of power, and idle talk? You only have to look at the daily news to see that, yes, indeed they do. And what hinders people from praying that the Lord deliver them from those others sins you named, or anything that they are struggling with? Do we only pray in church? We also pray at home before our icon corner and ask the Lord to help in our struggle against sin. It is a mistake to divide Orthodox Christians into monks and non-monks. We all have the same struggles.

Afanassy3/5/2018 3:28 am
The Prayer of St Ephrem focuses primarily on the monastic temptations of sloth, despair, lust of power, and idle talk.
Many translations of this prayer exist with sometimes significant word changes: https://en.wikipedia.org/wiki/Prayer_of_Saint_Ephrem

St Ephrem himself was not a monk, but a deacon who lived an ascetic life as a Covenanted Christian, a kind of pre-monasticism.
Nonetheless, the prayer was propagated initially by monks in Constantinople many years after his death.

For Orthodox parish use today, do we not confront four more damaging sins? Would not PRIDE, HATRED, GREED, and LUST be of greater concern in our 21st Century world? (PRIDE is the Mother of All Sin.)

Editor3/1/2018 4:06 pm
As we wrote in the upper paragraph, the entire commentary will be posted here in English translation as a series. Keep watching for the rest! It's all very good.

Rdr Andreas Moran2/28/2018 2:48 pm
The rest of the commentary is also worth reading (of course) - follow the link to the website of the Church of the Joy of All Who Sorrow Icon; those who cannot read Russian can put the text through a translation site such as Yandex Translate. Especially worth noting is the second paragraph of section 2 where St Luke says 'Our religion is not a religion of gloom'.
×