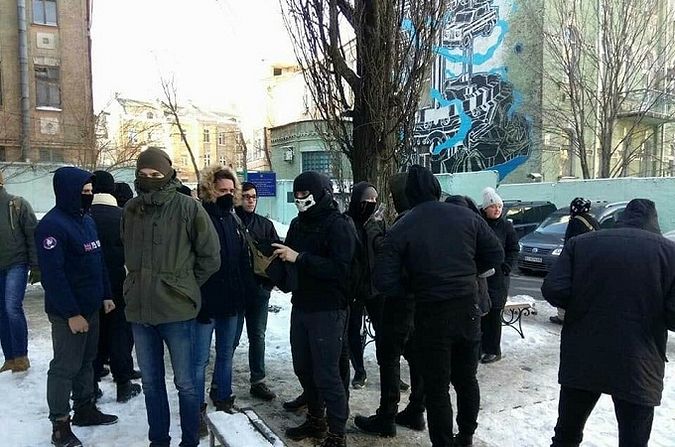 Members of the radical right-wing organization C-14 attacked the offices of the Union of Orthodox Journalists in Kiev yesterday afternoon, accusing them of spreading anti-Ukrainian propaganda, the Union reports.

The incident occurred yesterday at about 3:00 PM. The young people were wearing masks.

About 10 people were keeping watch at the office entrance, headed by activist Eugene Karas, while several others broke into the office, shouting obscenities. There were several dozens in all, as the Union notes in a prepared statement.

The C-14 members did not leave the office for an hour, terrorizing the editorial staff, and accusing them of “anti-Ukrainian activities” and of “distributing separatist literature.”

Police were called to the scene and it was discovered that a hard drive was missing. Their actions fall under the criminal code sections for theft and impeding journalistic activities.

The Union has called on law enforcement agencies to conduct a prompt investigation of the crimes, to bring the perpetrators to criminal responsibility for the crimes committed, and to ensure the safety of and protect the constitutional rights of journalists.

Note that the far-right nationalistic C-14 organization was added to the list of international terrorist organizations in November of last year.

Members of the same group also attacked a monastery of the canonical Ukrainian Orthodox Church in Kiev yesterday.

“Assaults on Holy Places Will Not Go Unpunished”
A Conversation with the Abbot of the Pochaev Holy Dormition Lavra, Metropolitan Vladimir (Moroz) of Pochaev
Sergei Geruk
There are innumerable examples of the intercession and help of the Theotokos, and every pilgrim and parishioner of the Lavra still experiences this aid. The Mother of God also appeared here in 1240 in a pillar of fire and left her footprint on a rock. She, like the burning bush, bore witnesses that this place is holy. She is the abbess here and the patroness of this land… Ukrainian nationalist Facebook group begins collecting data on Orthodox priests
A new Facebook group “Get Moscow Priests Out of Galicia” appeared last month, aiming to collect information on all parishes and priests of the canonical Ukrainian Orthodox Church under the Moscow Patriarchate (UOC) in the western Ukrainian border province of Lviv, with calls to oppose the Church.
Comments
×