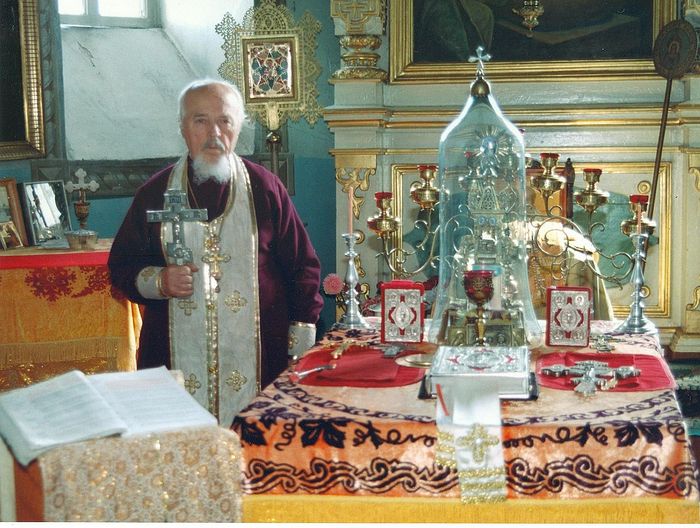 The oldest priest of the Belarusian Orthodox Church, Mitred-Archpriest Ioann Miseyuk, the rector of the Holy Resurrection Cathedral in Borisov, reposed in the Lord late in the evening on Tuesday, reports the Diocese of Borisov. He was 94 years old.

Fr. John was born on January 25, 1924 in the village of Mizhevichi in the Grodno Province in the family of a priest. He was ordained to the diaconate in 1943 and in 1948 to the priesthood. He studied at the Minsk Theological Seminary from 1946 to 1950, then continuing his spiritual formation at the Leningrad Theological Academy.

Archpriest John was called upon to serve in parishes throughout all of Belarus, serving last in Borisov, where he was appointed to the cathedral in 1988.

Fr. John received several Church awards for his many years of heartfelt service to God and his fellow man. In October 2013, on the occasion of this 70th anniversary of ordained ministry, he was awarded the right to wear the patriarchal cross—the highest liturgical award for clergy of the Russian Orthodox Church.

His funeral was celebrated yesterday by His Grace Benjamin of Borisov and Maringorskaya and clergy of the diocese. Belarusians also brave the cold to venerate their beloved St. Valentina of Minsk

Belarusians also brave the cold to venerate their beloved St. Valentina of Minsk
A steady stream of pilgrims continued throughout the entire day to the village cemetery where St. Valentina is buried, covering the last 1.2 miles on foot, despite the freezing temperatures and hard frost.