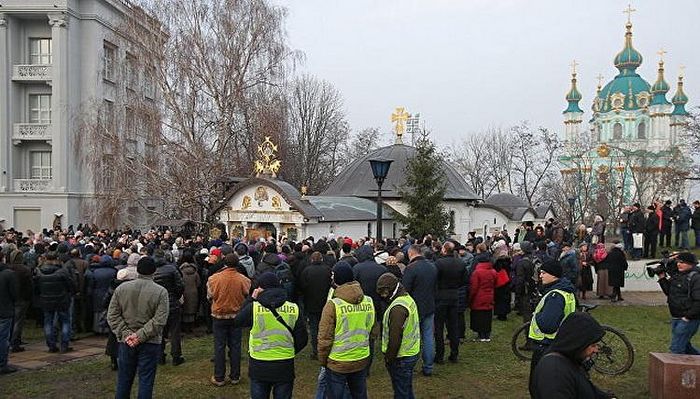 A petition in support of the Tithes Monastery in Kiev, which has been under constant attack and threat lately, entitled “On Ensuring the Right to Freedom of Religion for the Faithful of the UOC [Ukrainian Orthodox Church—O.C.] and Public Order Around the Tithes Church (Chapel)” has gathered more than 20,000 signatures, reports The Union of Orthodox Journalists.

In the petition, Kiev residents ask the mayor to provide operating property rights, not to interfere with believers’ right to freedom of religion in Kiev, and not to allow the incitement of religious hatred in the capital.

In this vein, the petition notes that the property rights of the Tithes Church are registered correctly in the state register of the rights to real estate as the religious community of the UOC the Tithes Church of the Nativity of the Most Holy Theotokos in the Shevchenkivsky District of Kiev.

The collection of signatures began on February 4 and is still underway. Signatures are being accepted in Kiev churches of the Ukrainian Orthodox Church.

The Tithes Monastery has been the focal point of threats and attacks from Ukrainian nationalist radicals lately. The church was vandalized and set on fire on January 25. On February 3, about 200 radicals staged a protest near the monastery, calling for its dismantling, claim that it illegally sits on the territory of a museum. More than 3,000 came out to defend the monastery on the same day.