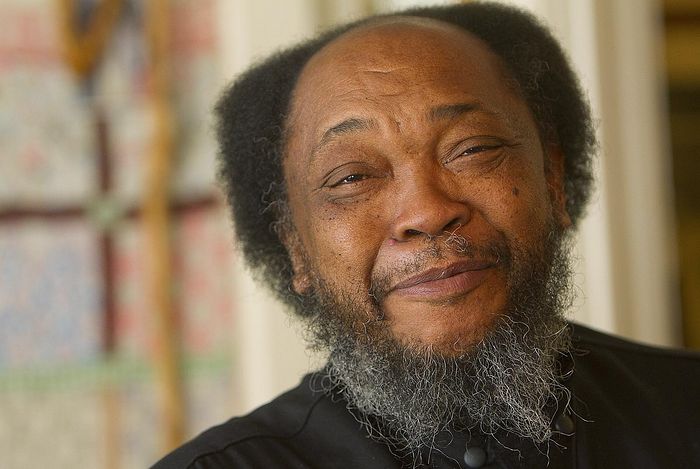 You wouldn’t suspect that the jovial Orthodox priest who carries the gold chalise with such reverence from behind the iconostasis of “Mother of Unexpected Joy” church was once a drug dealing, rambling hippie and coffee-house owner with his own underground band, not to mention an illegitimate descendent of Nathaniel Boone, the son of the legendary American hero Daniel Boone. Father Moses Berry, who is by now in his 60s, is still a rolling ball of fire, overflowing with spontaneous exuberance. He bounces from one story to another as he moves from one section of the Ozarks Afro-American Heritage Museum he founded in his native town of Ash Grove. He is a man who unravels a ball of tightly-wound stories, one knotted to another and yet another.

Father Berry’s story, in fact his entire existence, is rooted in the dark history of American slavery. The three-room museum he opened is jam-packed with heirlooms, objects and artifacts culled entirely from his family’s possession. Two faded sepia prints in oval frame reveal pictures of his great-grandmother, Maria Boone, mistress to Nathaniel, and her daughter, Caroline Boone Berry, his grandmother. They are wearing stiff, laced-up dresses with matching bonnets fashionable for ladies in the 19th century. He says that the child of a slave mistress is born between the dark and the daylight, raised in the shadowland, not of this world. They are children whose existence is denied, whose marked absence in the American consciousness is a mark of their presence. Chinese man travels thousands of miles to be baptized
The former Su, now Constantine, received the gifts of the Holy Spirit with exemplary devotion, fasting, and prayer, on Saturday, September 2. The Brotherhood of Moses the Black

The Brotherhood of Moses the Black
Katie Zavadski
It may come as a shock to some, but one surprising religion is making serious inroads into the African-American community. To be Black and Orthodox: Part of my Story
John R. Gresham, Jr.

To be Black and Orthodox: Part of my Story
John R. Gresham, Jr.
I have taken my African-American identity to the table where Moses the Black speaks with John Chrysostom. I stand with Ephrem the Syrian and Cyprian of Carthage. I take from the chalice of Ireland’s Patrick and Egypt’s Mary.
Comments

ben marston dpm3/24/2018 4:25 am
Fr. Moses, was the first Orthodox priest I ever laid eyes on. At the time we were living in Springfield, Missouri, and were charismatic anabaptists attending a 28 Prayer Book Anglican Church.
We saw in the news that some Orthodox were coming to the area to consecrate a slave cemetary.
Our curiosity was stirred and we visited the consecration, and got liberally doused with blessing water from a robust Russian sounding Hierarch with an evergreen branch. Such an alien world at the time; we went into the little chapel, and looked at the icons while others venerated. Totally alien at the time. But Five years later we were Orthodox and now that alien world is the Pond we swim in. Thank you Fr.
×