This homily from Metropolitan (Archimandrite at the time) Tikhon (Shevkunov) was delivered on the feast of the Royal Martyrs in 2014. 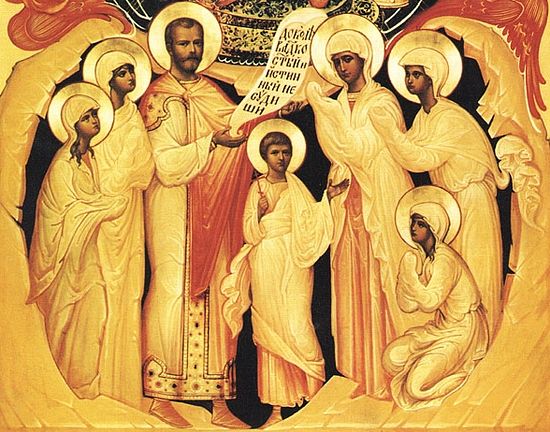 Exactly twenty years ago, we celebrated the first Divine Liturgy оn this night here in the then newly-opened Sretensky Monastery—the night of the murder of the Royal Family. The tsar was not yet canonized then, and there were many doubts, and even sometimes slander (although, slander still continues today), and there were objections to the canonization of the Royal Family.

We served the Liturgy then, remembering the Royal Family and their companions at the Litany for the Departed, and then, after the Liturgy, we served a panikhida. We very much wanted the glorification of the Tsar-Martyr, the Tsar-Passion-bearer to take place, because many then, not only in Russia, but throughout the entire Russian diaspora, and not only Russians from the Russian Church, but many Orthodox people from other Local Churches understood that despite any difficulties in his reign, despite any internal temptations and doubts that temporarily accompanied any reflection upon it, and even moreso, despite any slander built up against the Tsar and his family, they were absolutely unique people in the history of our Church and state.

The desire to understand them and to somehow deeply feel their podvig was the basis for the appearance in our church of this icon, which we titled the Opening of the Fifth Seal. It was prohibited then to depict the Tsar-Martyr as a saint, because he was not yet glorified. But we took the story from the Book of the Revelation of the opening of the fifth seal. When the angel committed this great act, so mysterious for us, then the seer of mysteries [St. John the Theologian—O.C.] saw under the altar of God the soul of those murdered for their witness to God. This is what we depicted on this icon, painting precisely this portion from Revelation, and then we humbly waited for their glorification by the Church.

I remember when the reposed Patriarch, His Holiness Alexei (may God grant him the Heavenly Kingdom) first came to serve here after we placed this icon here. He was sensing the solea, when suddenly his gaze fell upon this icon. We all froze, because, of course, it was not completely according to the rules. Although, it was according to the rules, because it does not say, “Holy Martyrs,”1 although, everyone knew who it was, of course. His Holiness Patriarch Alexei grunted a little and continued censing. Then he asked us what the icon was about. I explained it to him in detail about the icon, and he said, “Well, alright.”

And within a few years, the Royal Martyrs were glorified. We know a lot about them, we talk a lot about them, and we are still learning about them, but they were glorified. But what is a canonization? A canonization is the elevation to canon, that is, to Church law, of the already-existing veneration of the saints. It undoubtedly existed, but there remained only for the Church to recognize the legitimacy of this veneration. (Of course, we know that not all veneration is legitimate). Thank God that our Church has committed this great act, and now we cannot even imagine our Church without these great, dear saints, so close to us, so touching, brave, faithful, and absolutely invincible in their humility and faith.

O holy Royal Martyrs, pray to God for us. May God save you.

1 His Eminence meant that the icon is not, strictly speaking, an icon of the Royal Martyrs as saints, but rather of a scene from Revelation.—Trans.
See also Illuminated and Radiant: the Royal Martyrs
Archpriest Artemy Vladimirov
On July 4/17, we honor the memory of the Royal Passion-bearers, murdered in 1918: Tsar Nicholas Alexandrovich II, his wife Alexandra Feodorovna, and their children—Tsarevich Alexei and the Grand Duchesses Olga, Tatiana, Maria, and Anastasia. Archpriest Artemy Vladimirov speaks about the example given to us by the lives and deaths of the holy Royal Martyrs.
Comments

Anthony7/23/2018 1:42 pm
Hello Mr Rdr Andreas Moran! Greetings Sir! According to Ayie Morphou, the prayers for England referred to by Geron Aristoklis are in fact the prayers of the Orthodox Saints of the British Isles for the country (hard to believe there was such a time when Britain was Holy and Orthodox, eh!), and whose lives the ever marvellous Dmitry Lapa recounts on the pages of this very website! The holy saint is definitely not referring to Mrs Elizabeth Windsor and her household! They're not even Orthodox.

Rdr Andreas Moran7/18/2018 1:35 pm
Regarding the saving of Britain by the prayers of godly kings and queens, some British monarchs have been pious Christians, including the present Queen and her father, King George VI. To the latter, there is attributed by many the nation’s being saved from catastrophe in its darkest hour, in May 1940, by his calling his people to a day of prayer for deliverance from the imminent Fascist threat. The account is set forth here: https://www.christianstogether.net/Articles/200052/Christians_Together_in/Christian_Life/The_Miracle_of.aspx

Anthony7/17/2018 2:06 pm
Geron Aristoklis (+1918): "An evil will shortly take Russia, and wherever this evil goes, rivers of blood will flow. It is not the Russian soul, but an imposition on the Russian soul. It is not an ideology, nor a philosophy, but a spirit from hell. In the last days Germany will be divided. France will be just nothing. Italy will be judged by natural disasters. Britain will lose her empire and all her colonies and will come to almost total ruin, but will be saved by praying enthroned women. America will feed the world, but will finally collapse. Russia and China will destroy each other. Finally, Russia will be free and from her believers will go forth and turn many from the nations to God''
×