The reminiscences of Mother Euphemia, a spiritual daughter and cell-attendant of the ever-memorable Archimandrite Kirill (Pavlov) for whom she cared for many years, of the life at the Holy Trinity-St. Sergius Lavra in the early 1990s. 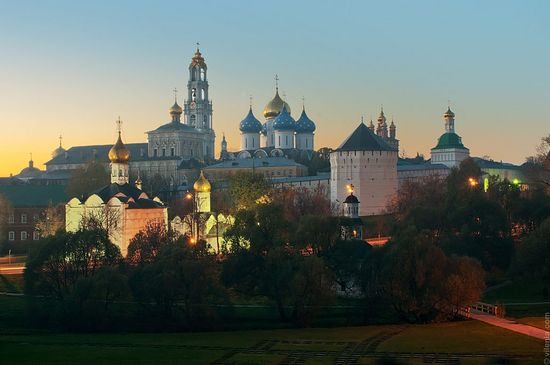 Our older nuns who were accustomed to comforts and conveniences would settle in for the night on sofas and folded beds in Mother Sergia’s cell. The Lavra’s monks would allot younger sisters the space behind the screens of the Patriarchal Chambers on the ground floor, amid wonderful antique wardrobes, decorated with intricate carvings.

As for Katyushka1 (she is now an abbess) and me, we loved to “run away” and sleep in the covered gallery, the windows of which looked out upon the Lavra’s inner courtyard, along with a little garden and lots of stray cats.

Far away, on the other side of the garden, there was a flickering light of the “gifts” room’s window. It was Archimandrite Kirill (Pavlov)’s room where he received visitors. He would stay in the “gifts” room until about half past one a.m., receiving the faithful who were flocking to the Lavra from far afield, clergy, seminary students, and us—the nuns from the Patriarchal residence.

And then, exhausted, dripping with sweat, pale, yet as courteous and affable as ever, he would trudge back to the St. Barbara living quarters, accompanied by his cell-attendant. And, after about two hours of sleep and rest that night, Fr. Kirill would wake up and go to the festal Liturgy, presided that day by the patriarch.

Katyushka and I would come running and confess to Elder Kirill by eleven in the evening. And having breathed enough of the warm atmosphere of the sweet semi-darkness of the “gifts” room, piled high with sweets, books, and food (the elder would generously and with prudence distribute all of this among the needy), we would go to bed. 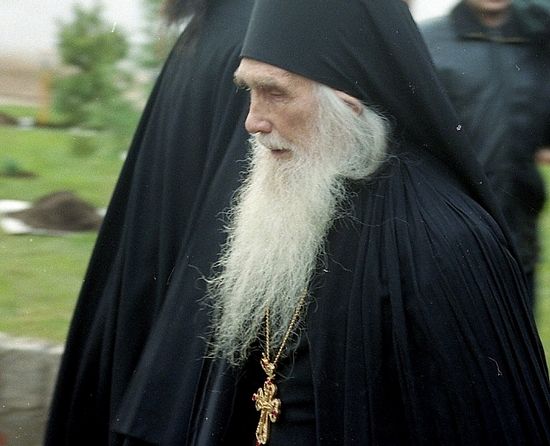 My task was a daring raid into the bishops’ refectory, where an enormous grandfather clock that would erupt into beautiful, melodious, and loud chimes stood in the corner, towering over rows of tables, covered by old-fashioned white tablecloths.

I would “barbarously” stop this clock at about midnight, hoping that monks on duty would have time to wind it up again in the morning, while laying the tables before the arrival of the guests.

Sometimes Fr. Dorotheus, who had a long beard, would reprimand me for my “unauthorized act”. He did it while deliberately frowning, with a glum expression on his face. Many believed that it was his true nature so they tried to keep aloof from Fr. Dorotheus.

On the contrary, I liked it when Fr. Dorotheus started “droning on”; I grinned widely from ear to ear, and he, seeing that I understood him correctly, would go away, dropping a remark before leaving: “Well done, Natashka [an affectionate and diminutive form of the name Natalia, Nun Euphemia’s secular name]! You are not offended!”

And the feast would commence! 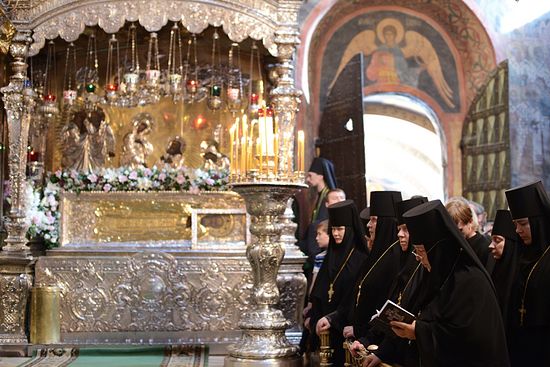 A service at the Holy Trinity Cathedral

And it didn’t matter that I could hardly sleep, although I had earlier stopped the grandfather clock.

The Lavra’s bells were pealing out from the bell-tower to remind us of the approaching dawn tenderly and insistently, hurrying us to the early service.

We could only allow ourselves to attend the early festal Liturgy during which there was a terrible crush and jam in the church. After it we would dash into the kitchen as we were to cook a sufficient amount of food to serve about 100 hierarchs, about 200 guests of the patriarch, and abbesses of different convents.

Oh my Lord, I loved that magical kitchen whirlwind of St. Sergius day so much!

For me the asceticism, hesychasm, the “heights of divine contemplation”, and the “peace and love in the Holy Spirit” of the feast were “contained” in three frying pans (on which I fried fish) and a kitchen sink. The sink of stainless steel was uncomfortable and deep, so I had to “come up” from there wet and dirty all over. 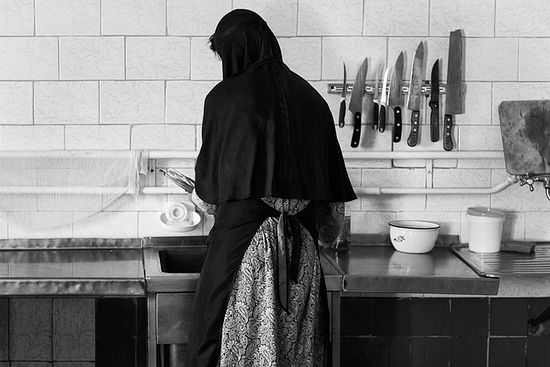 I was twenty-three and I wanted to be helpful everywhere: to “sculpt” fish cakes with the sisters, to make many pots of salads, to run to the monks’ kitchen and bake marrows on several baking sheets… It was great fun to help the Lavra’s fathers set the tables—you could never fall asleep while walking! We had to chase up and down the steep cast-iron stairs, racing with one another. Some abbesses and priests whom we knew would drop in at the Patriarchal chambers before the service to exchange greetings and wish a happy feast to one another. Whatever we did on that day, everybody was happy and filled with joy in the Lavra of St. Sergius. All of us felt the invisible presence of “the Abbot of the Russian Land”.

I personally was sure that St. Sergius above all was present in our monastery kitchen with its bustle, washing the dishes with us or indulgently observing us chat in a carefree manner over a cup of tea…

I didn’t even go with the sisters to St. Sergius’s shrine one more time during the day. I preferred to stay alone indoors, in front of a pile of dirty plates and saucepans, listening attentively to this great and holy day, ignoring fatigue and several sleepless nights. 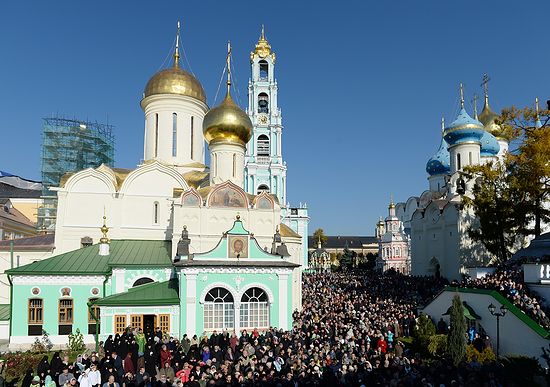 St. Sergius Day in the Lavra

This was the most wonderful insomnia and weariness in my life.

That day revealed, as it were, the true essence of monastic holiness. The holiness that doesn’t keep the people away by feigned rigor or a complexity that is hard to fathom.

Truly it was everywhere around us, just like air or autumn freshness.

It was in simple, everyday things.

In hospitality and openness.

In the willingness to be helpful towards others and sympathize with them.

In hope and youthful inspiration.

On three frying pans and in a kitchen sink.

1An affectionate and diminutive form of the name Yekaterina.
See also A Wreath to St. Sergius of Radonezh
Fr. Sergius Bulgakov

A Wreath to St. Sergius of Radonezh
Archpriest Sergei Bulgakov
Five and a half centuries have passed since the blessed repose of St. Sergius. The changes that have occurred in everything are great, and great is the historical distance that separates us. However, he still remains not only our spiritual leader and heavenly intercessor but also a friend who measured the depths of our sorrow and through it became our kin.
Comments
×