“Sts. Spiridon and Nicholas are especially large stars in the divine heavens”

Along our path to the Lord we are strengthened more than anything else by our faith in the saints! Had there not been this endless stream of luminaries of our faith, there would not have been Orthodoxy. They are all different, like stars in the sky—large and small, but all just as miracle-working! And Sts. Spiridon and Nicholas are especially large stars in the divine heavens.

I had an especially warm relationship towards Father Spiridon right away, because he was a great defender of the Orthodox faith. He showed the Catholics and the Turks the road out of Greece.

He has helped me several times. Here are two incidents. About four years ago I was having a medical problem in female matters. I didn’t go to any doctors—I just don’t like to; I simply endured it. One day I began to read the Akathist to St. Spiridon of Tremethius (as a newcomer to Orthodoxy I knew that one should read them). Suddenly I felt a ray come from the icon to just below my stomach and clean something out there. My heart stopped and I understood that something miraculous was happening. I continued reading and soon the ray left. After that my health problem disappeared forever.

The second time I ran to read the Akathist to St. Spiridon was when my twenty-three-year-old daughter was trying to get to the airport in Athens. That day a protest had broken out near the hotel (something like Maidan only against the European Union). Everything was barricaded everywhere. My daughter called me in a panic: “Mama, the plane is schedule to take off soon and we can’t get to the airport! What should we do?” I ran to read the Akathist to Father Spiridon—after all, Greece is his “jurisdiction”. Well, and you can guess what happened next—it all went smoothly! The hotel owner himself drove them to the airport, shouting at the protesters along the way, and on time for the flight at that. But the flight was cancelled till the next day and my daughter and her friend were given a plush room. Father Spiridon gave them another wonderful day in Greece!

“We lived six years in a rented apartment, and we really wanted our own home”

I met this kind saint in an unusual way. I came to a new church (I used to go to another one), and saw an icon in the corner. It was unfamiliar and outwardly old, darkened. A saint looked at me from the icon, and I couldn’t read his name. But I felt some kind of warmth and love from him. I wanted to stand next to him, to pray or at least look; after all, I didn’t know whom I was praying to. I asked a lady in the church. She said something to the effect of: “Oh, that’s a wonderful saint, Spiridon of Tremethius. Read his life.” I asked the saint’s name again so that I wouldn’t forget. I read the saint’s Life, which really touched me and seemed authentically remarkable.

Well, for a long time I was unable to solve my living problem. My husband and I lived for six years in a rented apartment, and now we had a child and really wanted our own home. But I was ashamed to ask God, because He was already taking care of us in more ways than we asked. We had money for the apartment; it was a one-room apartment but very spacious and in a new building, next to my parents and in a good neighborhood. For six years the owner had not raised the rent once and fact never bothered us, never gouged us for pay. We were well fed, had nothing to complain of, only to be thankful for.

Then I learned that people pray to St. Spiridon of Tremethius also about everyday life things, and that he helps. His gaze from the icon, and the circumstances seemed to me to be no coincidence, and I decided to ask the saint to help us, if it pleases God, to solve our problem with living space by God’s mercy. I also asked that it be near a church.

Once we went to the suburbs and stopped into a church. I wanted to buy something to remember it by. I looked, and next to me lay a small laminated icon of the saint! I asked my husband to buy it for me and was overjoyed. Now I could pray to him at home, and in general I get a warm feeling just looking at that icon.

Very soon our living problem was solved—not only solved, but like always, beyond what we asked! Two wonderful churches within walking distance, a park, infrastructure, and a remodeled apartment that was just what we wanted, even better.

Moreover our landlord started talking about moving us out, but the situation went on longer than expected, and we were able to move to the new apartment without having to live in an interim rental. Just too many coincidences. Wondrous is God in His saints! It seems to me that it wasn’t I who found his icon, but the saint who called me.

Glory be to God! Praise to the Most Pure Mother of God! Thanks and a low bow to St. Spiridon of Tremetheus and all the saints and angels of God!

“The saint worked a miracle and strengthened my faith”

St. Spiridon helped me many times, including in business. When his holy right arm and slippers were brought to Moscow, I went to pray to the saint for help. The saint helped me, and my business was sorted out. But the second time the saint helped me in that he showed me a miracle, by which he strengthened my faith and increased the love and gratitude in my soul. 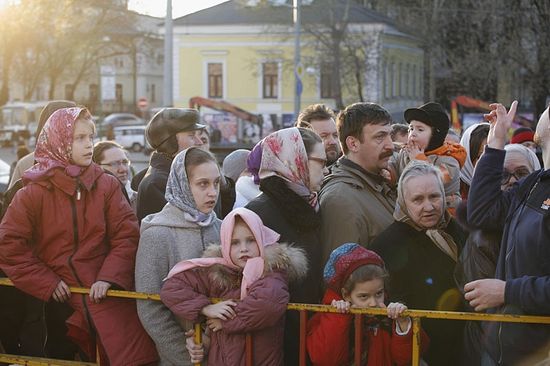 The Line for the relics of St. Spiridon at the Christ the Savior Cathedral, Moscow, 2007

Here is what happened. After speedy help from St. Spiridon I decided to go to Corfu to venerate his holy relics. I planned a trip for the summer. According to my tradition, I always went to Mt. Athos for my birthday. I prayed there for a few days, received Communion on my birthday, and left. The next day I had a plane to Corfu. At 5:00 a.m. I took a taxi to the airport. Τhe taxi driver said to me, “You are lucky that you’re going to the airport now, because in literally one hour, at six o’clock, there is going to be a taxi-drivers’ strike all over Greece.” I had a suitcase and a huge dish that I had brought in Vatopedi Monastery to give to St. Spiridon. How was I going to get from the airport in Corfu to my hotel, and then to the city to see St. Spiridon? It was a problem. But the main thing was not to worry. The Lord will work it all out!

I arrived in Corfu. I left the airport weighed down with my things. First: There was no strike, there was a heap of taxis, everyone was working, no strikes. I peacefully got to my hotel, changed my clothes, took my gifts, and went to the city to St. Spiridon.

I bought an icon of St. Spiridon in the church, and a local priest asked me, “How long are you going to be in Corfu?” When he heard that I would be there a week, he offered, “Let’s place your icon in the reliquary with the relics for a week. Then you can come a get it.” So that’s what I did. I returned to the hotel that evening and heard on the news that the taxi drivers had begun a strike all over Greece at six o’clock that morning.

The next day the taxi drivers on the island of Corfu also began to strike. It was impossible to go anywhere from the hotel, and I just lay on the beach all week. I never heard the official reason why the taxi drivers waited a day on Corfu before striking, but I guessed it. St. Spiridon is a great saint of God.

Incidentally the taxi drivers’ strike ended about a week later—exactly when I had to go to the city to get my icon that had been left in the saint’s reliquary. Then I had to get to the airport. At St. Spiridon’s prayers my pilgrimage went easily and unforced, although passions were boiling all around!

Ever since then I always love to fly to Corfu to visit St. Spiridon. I know that he loves guests. He will always meet them and send them off!

Not long ago he appeared to me in a dream. He suggested an idea to me that I would never have thought of myself. It was such an unexpected idea that I doubted its veracity for a month, until I received a confirmation of it from a separate source.

That is how St. Spiridon takes care of us, remembers us, and helps us. And we love him! We pray to him to be our intercessor before God! Glory to thee, St. Spiridon of Tremethius, glory to thee! St. Spyridon of Tremithius and the Light of Virtue
Roman Savchuk

St. Spyridon of Tremithius and the Light of Virtue
Roman Savchuk
In this brief episode from the Life of St. Spyridon, just as in other stories connected with his righteous service, the question is answered with particular force as to what language of faith Christians should use when addressing a world that has rejected Christ. How St. Spyridon Helped a Family
Just as he did during his life, out of his great kindness St. Spyridon continues to help people who pray to him. Here is a story sent to the editors of Eskom-Vera from Olga of the town of Syktyvkara. It happened last year. Before then, my husband and I lived with our three children in a crowded two-room apartment. When a fourth little one appeared to the world, it became clear that six people could not live there and we had to look for a larger place.
Comments

&Alpha;&nu;&tau;ώ&nu;&iota;&omicron;&sigmaf; &Sigma;&pi;&upsilon;&rho;ί&delta;&omega;&nu;12/25/2018 1:33 pm
"He showed the Catholics and the Turks the road out of Greece.'' Hi all! It's my name day today! Rejoice! At this difficult juncture for our Ukrainian Orthodox brothers, I will be praying the Akathist to Άγιος Σπυρίδωνας, that he sends those Ukrainian heretics packing helter skelter with one almighty smack from the Orthodox Churches, as he did to that accursed Latin who tried to defile his Church in Κέρκυρα. https://akathisttostspyridon.wordpress.com

Oh and btw, Sotos Chondropoulos, who wrote about the life of Άγιος Νεκτάριος also wrote about Άγιος Σπυρίδωνας life. You can find the book here https://www.greekorthodoxbooks.com/C2E570E9.en.aspx
×