Commemorated on May 22/June 4 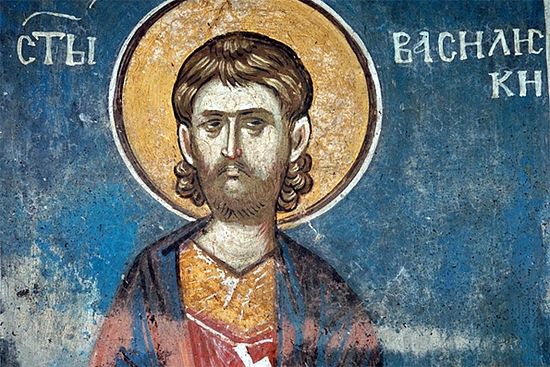 The Holy Martyr Vasiliskos, a relative of the Holy Martyr Theodore Tyron [the Recruit, commemorated 17 February], suffered martyrdom together with his brothers Eutropios and Kleonikos during Emperor Maximian Galerius' persecution of the Christians (305 - 311 AD). The Holy Martyrs Kleonikos and Eutropios (commemorated 3 March) were crucified, while the Martyr Vasiliskos was sent to Komana, where he was imprisoned. On coming to the town of Amasia, the ruler Agrippa began to persecute the Christians.

In prison, Vasiliskos was preparing to endure torture. The Lord appeared to the Martyr in a dream and promised to help him; he also foretold that he would die a martyr in Komana. St. Vasiliskos asked the prison guards to allow him to go to the place of his birth and say goodbye to his relatives.

As they revered him for the sanctity of his life, and for his working of miracles, they granted his request. When St. Vasiliskos arrived at his home, he announced to his family that he was seeing them for the last time, and he strove to convince them that they should stand firm in their Faith.

On hearing that St. Vasiliskos had been released to his relatives, Agrippa became enraged. After inflicting cruel punishment upon the prison guards, he sent a detachment of soldiers commanded by the cruel magistrate (the ruler's aide) after the Martyr. Meeting the returning St. Vasiliskos, the magistrate put heavy manacles upon him, and shod him copper boots into which nails had been hammered through the soles; then he sent him off to Komana.

Arriving at a certain village in the sultry heat of midday, the travelers stopped at the house of a certain woman named Troyana. The soldiers went

to rest and to have a meal in the house; they left Vasilisk tied to a withered tree. Standing in heavy chains under a blazing sun, the Saint prayed to God. Suddenly, a Voice from above said, "Fear not; I am with you." The ground shook, and from a cliff, a spring burst forth. Feeling the earthquake, the magistrate, soldiers and Troyana all ran from the house. Amazed by the miracle that had taken place, they freed the Martyr. Ailing residents of the village would come to the Holy Martyr and would receive healing in answer to his prayers.

When the Martyr finally stood before Agrippa, Agrippa, ordered him to offer a sacrifice to the pagan gods. The Martyr answered, “At every hour, I offer God a sacrifice of praise and thanksgiving.” They led him to the temple. Immediately, a fire descended from Heaven and consumed the temple, reducing the idols in it to ash. In impotent rage, Agrippa ordered the St. Vasiliskos be beheaded, and that his body be thrown into the river.

The Martyr met his death in the year 308. Christians soon were able to ransom the Martyrs relics, and in the night, secretly buried him in a ploughed field. Some time later, a church was erected on the site, was dedicated to the Holy Marty Vasiliskos, and his relics were transported into the church. By the prayers of the Holy Martyr, miraculous healings began to occur. In a dream before his death in Komana, St. John Chrysostom (commemorated 13 November) saw Holy Martyr Vasiliskos, who said to him, “Tomorrow we will be together.” The world knows the story of the Holy Martyr’s spiritual struggle thanks to the account left by St. Eusignos (commemorated 5 August), an eyewitness to Holy Martyr's sufferings. “A Christian’s dignity is made known in tribulations”
Archpriest Artemy Vladimirov
With respect to today’s feast, we can say the following: Christians endure suffering for their faith that is no less onerous than that of the first centuries when the Gospel news was being spread across the earth. Homily on the day of holy martyrs Photius and Anicetus
Hieromonk Irenei (Pikovsky)
If for the pagans death meant the ruin of life, then for Christians a martyr’s death was gain of the Kingdom of Heaven. Belief in the Resurrection was the greatest treasure for ancient Christians.
Comments
×