How the Future Patriarch Pavle Repaired a Path, and What Came of It

From reminiscences of Archimandrite Jovan (Radosavljevic) (+2021) Bishop Pavle of Raska and Prizren, 1957 In the 1950s, Hierodeacon Pavle, the future Patriarch of Serbia, lived in the Raca Monastery in southwestern Serbia, not far from the town of Bajina Basta. Fr. Pavle stood out for his education. His learning was valued, and people often asked for his advice and explanations. But most of all he was loved—both in the monastery and in the neighborhood—for his meekness, gentleness and good sense of humor.

The young hierodeacon did not parade his knowledge, never making others think, “Look what a scholar we are dealing with.” On the contrary, Fr. Pavle preferred to pray and do the simplest work, which had little to do with his academic degrees. This was soon “corrected”, though not without some resistance from the future Patriarch.

Archimandrite Jovan, Patriarch Pavle’s friend and fellow ascetic, recalls that one autumn day they were sitting and talking at a large stone table under a cherry tree near the monastery gate—this is how Hierodeacon Pavle used to rest after repairing the path (several dozen yards long) leading from the guesthouse to the monastery bell tower. He needed to lay paving stones properly because the old ones always swelled up after the rain and it was extremely uncomfortable to step on them. So Fr. Pavle decided to correct the situation. During their conversation they noticed a traveler approaching the gate, with a bushy beard, a mop of gray hair, and a huge suitcase in his hands. He was walking with a tired yet firm step. Fr. Pavle exclaimed, “Wow! What a guest! Father Steva (Stevan) Dimitrijevic himself, a professor!”

“We hurried to meet the priest, took his suitcase, accompanied him to the monastery, accommodated him, then seated him at the table and treated him to fresh apple juice that we had made ourselves. Father Steva spoke in a very friendly and fatherly way with us young monks, the monastery abbot, and other guests. At that time Pavle set to work again, laying the paving stones and straightening the curbs. The archpriest, who knew his former student well, learned that Pavle also worked as a plumber, a water carrier, and did many other kinds of work. It could not be said that the important guest was overjoyed.

“It turned out that he came to the monastery, among other things, to inform the hierodeacon about his conversation with the then Patriarch Vikentije II about a new obedience for Pavle. Namely: A person who has a good knowledge of theology and other fields can and should use it for the benefit of other people, not only performing the obediences of a road worker or a plumber. The guest said the following, paraphrasing the Apostle Paul:

“A master has three nails: made of copper, silver and gold. The copper one will be used by the zealous master in ordinary work; he will drive in the silver one for some decoration; and he will use the golden one in the best place in the house to please not only himself, but also his friends. But you, dear Father Pavle, are doing the opposite, driving the golden nail—your knowledge and skills—into paving stones and wells. This is not good, dear brother. Such work can be done by another person more suitable for this, who has the skills of a working monk. Now the Church has a shortage of good teachers, professors, scholars, and good bishops!”

“These words of an honorable archpriest made us happy and sad at the same time. On the one hand, indeed, we realized that Father Pavle should become a priest, a bishop—this was clear to everyone. On the other hand, it pained us that he would leave us, that there would be no more good conversations and lessons with him, which gave us so much knowledge and comfort. But, as it turned out, Father Pavle, and later Vladyka Pavle, did not forget about us.

“This is how the story of the future Patriarch Pavle’s road repair ended. Afterwards he paved many more roads—not ordinary ones, but paths to God.”

P.S. Dear brothers and sisters, we continue to help Kosovo Serbs, churches and monasteries. If you have the opportunity and desire to help, donations can be transferred (in Russia) to:

The note, “Aid to Kosovo”, is required. “Father, Go Hang Yourself!” or the Beginning of His Ministry in Kosovo
Pages from the Life of Patriarch Pavle

“Father, Go Hang Yourself!” or the Beginning of His Ministry in Kosovo
Pages from the Life of Patriarch Pavle
Archimandrite Jovan (Radosavlević)
We continue the recollections of Archimandrite Jovan (Radosavlević), a friend, companion, and co-struggler of the Serbian Patriarch Pavle. Fr. Jovan published his recollections in the book Memories, printed at Rača Monastery in 2018. We offer today several episodes from this book concerning the persecution of the Serbian Church and people by the state and by Albanians. Patriarch Pavle of Serbia
Photo Gallery
Many already considered him a living saint, and after his repose, faith in the holiness of Patriarch Pavle is growing ever more and strengthening in the hearts of the faithful. 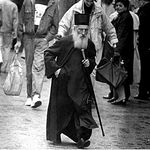