“I will never again live in a country where the Orthodox faith is persecuted.”

From the Life of St. Paisius Velichkovsky St. Paisius Velichkovsky, whom we commemorated last Monday, went down in history as a father of both Russian and Romanian monasticism—as a great elder who breathed new life into monasteries by his patristic translations and writings, and by raising new generations of hesychastic monastic elders.

But although St. Paisius was a monk on Mt. Athos, and finally in Moldavia, he began his secular and monastic life in what is now called Ukraine. His road to the monastery in those lands was strewn with rocks and thorns, and his autobiography1 tells us why.

St. Paisius Velichkovsky begins his autobiography by explaining that as he was approaching the end of his life, he considered that anything not committed to writing is committed to total oblivion. “I, Hieromonk Paisius, unworthy either of monasticism or the priesthood, was born and raised in the Orthodox Malorossian city of Poltava to pious Orthodox parents. I was born at the end of the year 1722, December 21…” The city of Poltava was in territory of the Russian Empire called Malorossia, (sometimes translated as Little Russia, but in fact, the origin would be more accurately translated as Russia Minor), which included Kiev, while the territories west of the Dnieper River were still under Polish rule. The youth Peter, as the future saint was named in Baptism, was sent to study in the theological seminary in Kiev, but he thoroughly rejected what was then the institution’s scholastic, Latin approach—a legacy of Polish domination—and yearned to become a monk. His journeys in search of a monastic home took him to various places in Malorossia, but he had heard that traditional Orthodox monasticism was flourishing in the Moldavian lands—and so he set his sights in that direction.

Although St. Paisius eventually became a great abbot and monastic elder in Moldavia, his first attempt to reach that promised land was cut short by a dire warning from someone along the way. The story he heard, which we cite in translation from his autobiography, gives us a picture of what the people in what is now Ukraine had to endure under the Catholic and Uniate yoke.

“And having spent the night at the house of one individual, in the morning I saw [my traveling companions] in the school of a local deacon. When they saw me they rejoiced, but then they asked the deacon about the road to Moldavia, telling him that they intended to walk there. He told them:

“ ‘O holy fathers, I don’t advise you to go there at this time, because it is very dangerous on the road. You see, due to the robbers everywhere, there are soldiers riding, and I fear that you will fall into the hands of the merciless soldiers, who for no other reason than their hatred of the Orthodox faith can do you serious injury. For example, listen to this story of what happened recently in our village.

“ ‘There was at our church before me one deacon of blessed memory. Out of human weakness he was cautious of attacks from the persecutors of the Orthodox faith, and at the Liturgy he would read the Symbol of Faith [Creed], that is, I believe in one God the Father, and when the part would come that says, And in the Holy Spirit, he read it like this: And in the Holy Spirit, the Lord the Giver of Life, Who truly proceeded from the Father.2 By reading the Symbol of Faith in this way, he avoided denouncements from the enemies of Orthodoxy. With time he was slandered before the ruler in that village as a blasphemer against the holy faith, saying that he did not read the Creed according to their theomachic, In the Holy Spirit… Who proceedeth from the Father and the Son, but only truly from the Father. Hearing of this the ruler was furious, and taking with him several soldiers, came to the church not long before the reading of the Creed. And when that blessed deacon began to read the Creed, the ruler immediately came closer to him and began listening attentively to how the deacon would read it. Having understood why the ruler had come closer to him, the deacon boldly read the Creed with full voice and measuredly, and when he came to the words, In the Holy Spirit, he was filled with the Holy Spirit and loudly proclaimed, And in the Holy Spirit, the Lord, the Giver of Life, Who proceedeth from the Father, casting off the word, truly, which he had added before out of fear. When the ruler heard it he screamed like a wild animal, lunged after him, grabbed him by the hair, threw him to the ground, and began mercilessly kicking him; then he commanded [the soldiers] to drag him out of the church and beat him with sticks without mercy.

“ ‘And at that time, someone ran to quickly tell the deacon’s mother. He told her about the accusation for which they were beating her son. But when she had run to the scene, with tears in her eyes she adjured him to not weaken in his ordeal but to call upon God for help, to not spare his life and to commend it to death for the Orthodox faith. And kissing his head, she said, “O my most beloved son! Do not be afraid of this brief torment that you are now enduring for confession of the Orthodox faith, but endure like a good warrior of Christ even death itself for Him, so that you would be worthy to receive a martyr’s crown from Him in His Heavenly Kingdom!” He then replied to his mother, “O my most beloved mother! Have no doubts concerning me, for with the Lord Who strengthens me I am ready to endure for the Orthodox faith not only this beating, but even a million fierce deaths. Just as there is only one God, glorified and worshiped in the Holy Trinity, so is the Holy Eastern Orthodox Church (in her alone, with good deeds, is there hope for salvation) the One Church, and there is no other than she! How could I not be zealous in enduring the fiercest death for her sake?!”

“ ‘Hearing this, his mother rejoiced with unspeakable joy, and raising her hands to heaven, gave thanks to Christ God for having vouchsafed her to give birth to such a sufferer for Him. But when the tormentor saw and heard this, he became even more infuriated and ordered his soldiers to beat him even harder. But the martyr of Christ, enduring with joy the terrible beating and rebuking the wickedness of the Western heretics, but glorifying and confessing the Orthodox faith, commended his soul into the hands of God.’” St. Paisius and his traveling companions were dissuaded from continuing on to Moldavia. So the future great elder traveled along the Dnieper, seeking a monastic enclosure where he could save his soul. He eventually came to the St. Nicholas Medvedkovo Monastery located on an island in the Tyasmin River, in the Kiev Metropolia. There he was tonsured a ryassaphore monk. But his quiet, joyful monastic life in the St. Nicholas Monastery did not last long.

“As God allowed it, persecutions began against [the monastery] and against the Orthodox faith from the local authorities of evil repute [under Polish rule]. One official came from the ruler of that country, commanded that all the monks gather in the abbot’s cell, and began with a variety of words to admonish them to be joined to his wicked faith.3 But when he saw that the brothers were in no way willing to agree with him, he became very angry, and entering the church, took inventory of all the church vessels; then leaving the church, locked it and sealed it with his official seal. He took the keys to the church and departed with great wrath and threats. There was no small confusion after to this in the monastery, because when the holy fathers saw that more than a month passed and the church was still locked, some of them began to disperse, each to his own destination. And seeing this persecution by the wicked heretics against the Orthodox, I placed my intention before God: from then on never to live in those countries where there is persecution against God’s Church and against the Orthodox faith from the wicked heretics.”

So apparently, persecution against the canonical Orthodox Church under Western influence is nothing new in the Ukrainian lands. Even in modern times, clergy are beaten, even killed, and churches are seized—in the 1990s it was again at the hands of the Uniates, and now by the so-called Orthodox Church of Ukraine. But just as then, so also now there are Orthodox Christians in those lands who are very strong in their faith. Once again there are confessors for the Orthodox faith. And I believe there will be until the end of time.

2 That is, he read the text quickly, adding these words so that it could be mistaken for the words, Who proceeded from the Father and the Son—the heretical Filioque of the Latins.

3 It is not clear whether he is talking about the Unia or simply Roman Catholicism, but most likely it is the former. 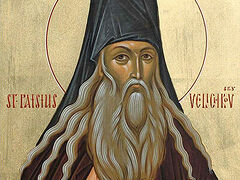 How Can a Layman Be Saved?
St. Paisius (Velichkovsky)

How Can a Layman Be Saved?
St. Paisius (Velichkovsky)
And where there is the peace of Christ, there is Christ Himself; but if there is no peace in the soul, then there is no Christ there. 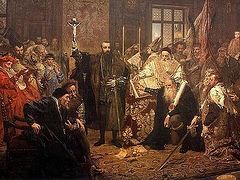 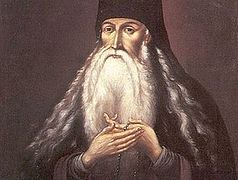 St. Paisius Velichkovsky
Commemorated November 15/28
The Elder would spend entire days with the brethren; the doors to his cell would sometimes stay open until 9 o'clock in the evening. Monks would come to talk about spiritual and practical matters. Also, the Elder’s daily reading of patristic books and his discussions on them was very significant in the spiritual life of the monks.
Comments