Russia’s Shield on the Neva River

Sermon on the Feast of St. Alexander Nevsky Battle of the Neva. Illuminated Chronicle of Ivan the Terrible, 16th C. The year 1240… Kiev, the capital city, the mother of Russian cities, is destroyed. A foreign army of Tartars are pouring over the Russian land, razing its cities and burning its settlements. One army after another perishes in the separate Russian princedoms that dared to enter into combat. But now there was a new calamity—enemies were advancing on Orthodox Rus’. Swedish soldiers were being sent against her, and the Teutonic and Livonian knights were sharpening their swords after them. They had one collective goal—to take possession not only of the land, but also the soul of the Russian people; to enslave the Russian man to a foreign power, and his soul to the Roman throne. Thus, the decisive hour was at hand. The Swedish forces were already landing in the territory of Novgorod. What is to be done? Submit to them, or enter into battle, risking the lives of the entire already small Novgorod army?

Ruling Novgorod at the time was the pious Prince Alexander Yaroslavovich. He understands that submission will save the lives of the Novgorodians and their possessions, but they will lose not only their sovereign but also spiritual freedom; that either by force or by cunning the foreigners will catch the Russian soul in their Roman nets and Rus’ will lose the Orthodox faith! Prince Alexander knows that Orthodoxy is the truth, and the priceless pearl, for which everything must be sacrificed. He believes that God does not abandon those who exert themselves for truth and righteousness, and he resolves to enter into combat.

On July 15, 1240, on the repose day of the baptizer of Rus’, St. Vladimir, he attacks the just-landed Swedish forces and with God’s help, utterly crushes them. What’s left of the alien forces quickly abandon the Russian land, and St. Alexander soon afterwards fights off other enemies from the West.

Meanwhile, more and newer Tartar forces advance on Rus’. But Alexander is not afraid—though the Tartars burden the Russian population with demands of tribute, they do not interfere with its way of life. Prince Alexander sees that he doesn’t have the wherewithal to battle with them just yet, but he knows that if the Orthodox soul of the Russian man is preserved, the time will come when he will throw off the Tartar yoke. He sees in the Tartars God’s whip sent to Rus’ for her sins, and he resolves to humbly endure this divine trial. He submissively goes to the Horde, fulfills all of Khan’s demands, persuades the Russian people not to oppose the Tartar rulers, but to gather their spiritual powers and place their hope in God. It was not easy for the glorious victor of the Neva to humiliate himself before the Khan, nor was it easy to persuade the Russian people to follow his example. But the labors of the holy Grand Prince Alexander, his courageous stand for his Orthodox faith, and his humility before God’s trial bore their fruit, albeit not soon. Having preserved Orthodoxy, the Russian people grew stronger under Tartar domination—which was gradually weakening.

The day came: Orthodox Rus’ stood erect and threw off the Tartar yoke. And bearing the light of Orthodoxy, the Russians themselves spread onward into places inhabited by Tartars. Thus fell the mighty stronghold of the former Tartar kingdom—Kazan—on the day of the Protection of the Most Holy Theotokos. Soon after the annexation of Kazan to Russia, Orthodox missionaries arrived there, and many Tartars received Holy Baptism.

Nearly twenty-seven years had passed after the conquest of Kazan when a pious girl named Matrona saw in a dream the Most Holy Mother of God, who commanded her to tell the ecclesiastical and civil authorities to dig up her icon in a place that she indicated. The appearance was repeated three times, and the girl fulfilled the command.

When on July 8, 1579 they began to dig in the place indicated by the Theotokos, they found an icon hidden there. The priest of the Church of St. Nicholas, Fr. Ermolai, took the icon out of the earth and brought it to his church. Soon that icon was glorified by many miracles and its fame spread throughout Russia as the wonderworking icon of Kazan. Priest Ermolai was widowed and soon afterwards received the monastic tonsure with the name Germogen (Hermogenes), then became the Metropolitan of Kazan, and during the Time of Troubles became the Patriarch of All Russia and a pillar of the Russian land. After his death, having been tormented with hunger by Russia’s enemies for his steadfastness, the grammotas he had written were sent with the letters of Archimandrite Dionysius of the Holy Trinity-St. Sergius Lavra all over Rus’—and they did their work. They roused Rus’, and from Nizhny Novgorod forces advanced to free Rus’ from the occupying Poles. The forces brought with them the Kazan icon of the Mother of God that St. Germogen had found at one time. With this icon the Russian forces liberated Moscow, and solemnly processed into the city, bearing the Kazan icon at the fore. This was in 1612, on October 22, which date became one of the feast days of the Kazan icon that is celebrated by all of Russia.

In honor of this victory a church was built in Moscow, in which an exact copy of the icon was placed. And when Tsar Peter returned to Russia the bank of the Neva River that had been lost during the years of trouble, and then built a new capital there, a monastery was built there dedicated to St. Alexander Nevsky. His holy relics were brought from the city of Vladimir to the shores of the river glorified by his courage; and the miracle-working Kazan icon was brought to the great cathedral built in honor of the Kazan icon of the Mother of God—the icon that had been discovered in the Tartar capital, where once Grand Prince Alexander humbled himself, preparing through his humility victory over that nation, along with the unification and grandeur of the Russian lands. 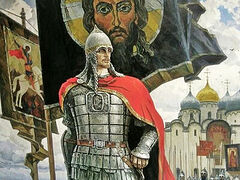 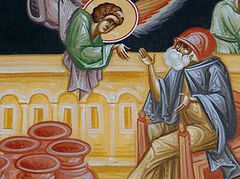 Store up Riches in God
A sermon delivered on the 26th Sunday after Pentecost on the parable of the foolish rich man, and St. Alexander Nevsky
Hieromonk Pavel (Shcherbachev)
The devil is a liar and a deceiver. He has been deceiving the human race with his theory of infinitely expanding storehouses for thousands of years. Even today, people still believe this lie. But the lie consists in the fact that the storehouses are not within the devil’s power, because they are in essence nothing other than the time of our earthly lives—which is in God’s hands. 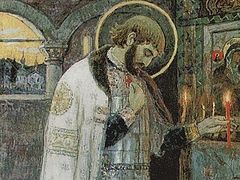 St. Alexander Nevsky: The Victory of Christ or a “Balance of Power”
Priest Roman Savchuk
The peace that faith brings into our lives is impossible to understand for someone who does not seek Christ. This peace is very far from any idea of an outwardly tranquil course of life and the comfort of a fickle reality that people far from the faith usually imagine when they think of peace.
Comments

Steve H.12/7/2022 12:13 pm
"Prince Alexander knows that Orthodoxy is the truth, and the priceless pearl, for which everything must be sacrificed". He had to die with his old soul and start living with a new one. The signs of a true Christian, the willingness to sacrifice everything so that truth can prevail.
×