The hierarchs, gathered under the chairmanship of His Beatitude Metropolitan Onuphry of Kiev and All Ukraine, remind the head of state that the UOC stands by the Ukrainian people and has always supported Ukrainian territorial integrity sovereignty, whereas the enmity against the Church only divides the people.

The Synod also strongly condemns a recently-aired blasphemous television program from Kvartal 95, the studio founded by Zelensky and some school friends in 2003.

“Overcoming the remnants of the communist system is impossible if we allow its methods to be applied, especially in the legal, public, and information space. In no case should we wage war against God, because this is the road to self-destruction,” the Synod states.

Read the Synod’s full statement below:

The Ukrainian Orthodox Church has more than a thousand years of history. Since the Baptism of the Equal-to-the-Apostles Prince Vladimir, it was our Church that was at the origins of Ukrainian statehood. The ups and downs of creative thought, science, and high art were associated with its beneficial educational and educational impact. During the most critical periods of our people’s existence, the Holy Church was the force that preserved their identity and gave them the inspiration to rise from their knees and move on. We can see numerous examples of this from the pages of history during the Mongol invasion, the Lithuanian-Polish era, the Cossacks, the Soviet period and until today.

With the beginning of the Russian Federation’s invasion of Ukraine, the Ukrainian Orthodox Church was the first among other religious organizations to strongly condemn this military aggression and express its unconditional support for the territorial integrity of our homeland. From the very beginning of military operations, our believers have been defending their country, sacrificing their lives for the liberation of their native land. The Ukrainian Orthodox Church constantly offers prayers and provides material assistance to military personnel, internally displaced persons, and other categories of the population affected by the war.

Against this background, the numerous slanders, insults, and baseless accusations that are being leveled against the Ukrainian Orthodox Church are very upsetting. They not only form a negative public opinion, but also incite religious hostility, which sets some citizens of Ukraine against others, dividing our people, who are so in need of unity in the conditions of war. The flurry of filth that is poured out on the Church creates anger and intolerance towards each other in Ukrainian society, which, in turn, leads to spiritual decline and the loss of moral values. This leads to the beating of believers and priests, the seizure and destruction of churches, and the banning of the church itself. In addition, the Ukrainian Orthodox Church is still deliberately called “Russian” and “Moscow,” and believers who are citizens of Ukraine are groundlessly considered enemies just because they belong to this Church.

Moreover, for the first time in the history of our state, “personal” sanctions were illegally and unjustifiably applied against clergymen who are citizens of Ukraine. This is a gross interference in the activities of religious organizations. As a result, the activities of entire dioceses that cover tens of thousands of believers and provide large-scale social and humanitarian assistance to the military, internally displaced persons, and many other segments of the population in need are blocked. In fact, these restrictions violate not so much the personal rights of clergy, but the rights of almost a thousand religious communities.

The systematic violation of the right to freedom of religion, the rhetoric of hatred and religious enmity against the Ukrainian Orthodox Church, which is cultivated with impunity in Ukrainian society, leads to such negative manifestations in the media as happened on December 7, 2022. On this day, a video of the program “Bayraktar New#104” produced by Kvartal 95 was shown on the television and YouTube channel called “Official Channel Chisto News.” For nearly 14 minutes, the program contained blasphemy, mockery, and sacrilege against God and the Ukrainian Orthodox Church, as well as false and unreliable information, contempt, insults to the religious sensibilities of believers and incitement to religious enmity.

Such shocking and blasphemous words cannot be repeated. This is a cynical mockery of the Holy Scriptures, God the Trinity, and the Lord Jesus Christ, for Whom thousands of people sacrificed themselves and went to martyrdom.

Giving the commandments to the Prophet Moses on Mt. Sinai, the Lord emphasized that His holy name should not be used in vain, for the LORD will not hold him guiltless that taketh His name in vain” (Deut 5:11; cf. Ex. 20:7). Blasphemy against God and his name entailed grave consequences, up to the punishment of death: Whosoever curseth his God shall bear his sin. And he that blasphemeth the name of the LORD, he shall surely be put to death (Lev. 24:15–16). I the LORD thy God am a jealous God, visiting the iniquity of the fathers upon the children unto the third and fourth generation of them that hate Me (Ex. 20:5). However, the greatest harm is suffered by man not in this world. In the Gospel, The Lord says, whosoever speaketh against the Holy Spirit, it shall not be forgiven him, neither in this world, neither in the world to come (Mt. 12:32).

In this regard, the clergy and laity of the Ukrainian Orthodox Church appealed to the management of the TV channel “1+1” and the “Kvartal 95” team with a demand to publicly apologize for the program and remove it from the information space, as well as to law enforcement agencies for a proper investigation of this shameful story. We expect that the authors of the script of this program, its presenters, and actors will draw appropriate conclusions and apologize to the Christian community of Ukraine.

Today, our state needs God’s help more than ever. Public abuse of God is unacceptable. We respect the freedom of other citizens to profess their chosen religion or not to profess any, but in this case we’re talking about the abuse of the religious sensibilities of the faithful citizens of Ukraine, many of whom are now sacrificing themselves to defend its territorial integrity and sovereignty.

The current war is our common struggle for universal values: freedom, dignity, and human rights. And we believe that Ukraine will emerge from the flames of war as a country that respects the constitutional rights of every citizen. That is why there is no place in our state for those means and technologies that offend and despise the Church, and cynically offend the religious sensibilities of millions of believers. These are the methods used by the God-fighting authorities during Soviet totalitarianism. At that time, hundreds of thousands of clerics, monks, and laity were deprived of human rights, exiled, and killed, whom we now honor as martyrs and heroes. Today, Ukraine is trying to overcome the totalitarian past once and for all for the sake of the future. But real decommunization must take place in the sphere of human consciousness. Overcoming the remnants of the communist system is impossible if we allow its methods to be applied, especially in the legal, public, and information space. In no case should we wage war against God, because this is the road to self-destruction.

Honorable Mr. President! In your person, we see the guarantor of compliance with the Constitution of Ukraine. In the 2019 elections, you showed yourself as a charismatic person, uncorrupted by the bureaucratic system. With this, you earned the trust of the faithful of our Church, who voted for you en masse. You managed to consolidate the Ukrainian people in all regions of Ukraine around the values of democracy, freedom, and dignity. That is why you are respected and supported by the whole world.

And today we respectfully appeal to you to ensure the right to freedom of conscience and religion for the faithful of the Ukrainian Orthodox Church. To protect Ukrainian society from rhetoric of hatred and intolerance on religious grounds, inciting religious hostility in the country. To unblock the activities of religious organizations that have been sanctioned together with their archpastors. To prevent the adoption of unconstitutional laws against the Church that are under consideration in the Verkhovna Rada of Ukraine. We hope that you will be able to prevent an artificial split of the Ukrainian people on religious grounds, which is vital in the face of external aggression. Let the spiritual values that we profess and defend truly come to life, and their implementation will be a real measure of our national maturity. 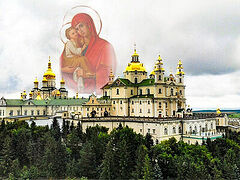 Pochaev Lavra appeals to Zelensky to end persecution of the UOC

Pochaev Lavra appeals to Zelensky to end persecution of the UOC
“Lenin’s decree, as we can see today, is unfortunately in effect. Just as the Church was separated from the state and persecuted after the revolution, so it is now,” the brothers lament. 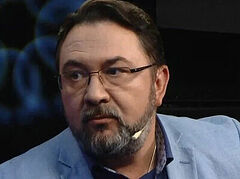 We’ll be internationally embarrassed if we ban the UOC, says Parliament committee head

We’ll be internationally embarrassed if we ban the UOC, says Parliament committee head
If Ukraine were to ban the Ukrainian Orthodox Church, it would only bring legal troubles and become an international embarrassment for the state, believes one deputy and committee head of the Verkhovna Rada. 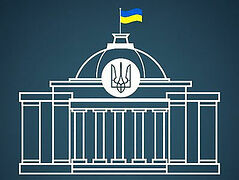 Committees of Ukrainian Parliament disagree about bills to ban the Ukrainian Church
As local administrations continue to declare legal bans on the Ukrainian Orthodox Church, politicians are increasingly clamoring to declare a nationwide ban on the federal level. 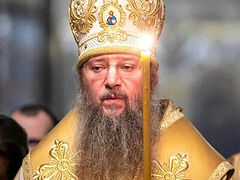 Sanctions won’t make us become schismatic or love Ukraine any less, says UOC Chancellor
Yes, the clergy and faithful can be slandered, and fake evidence can be planted against them, but ultimately this is powerless before God, Met. Anthony says in his address. 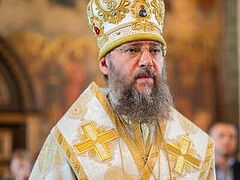 Ukraine sanctions five more hierarchs, two priests
The government documents do not indicate what the sanctioned persons are accused of. 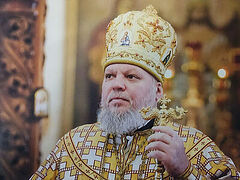 Bishop tells authorities: Look Christ in the face and tell Him you’re banning His Church
According to the Law on the Legal Regime of Martial Law, local government bodies have no power to ban religious organizations. The right to religious freedom is, in fact, upheld by the Ukrainian Constitution, he writes, as well as the EU and the UN.
Comments

Theodoros12/23/2022 11:36 pm
It is not the business of the Ukrainian government or the US foreign policy establishment to declare a Church autocephalous. The Dimenko led schismatic entity can never be legitimate or canonical considering its creation is dependent on political interests. The legitimate Ukrainian Orthodox Church has attempted to distance itself politically from Moscow and is persecuted now even more fiercely than before. The regime of Zelensky and his American backers have no inclination to respect the canonical Church. The Moscow Patriarchate should NOT grant autocephaly to the canonical Church under the present circumstances. After all, this entire dirty business between the Phanar, Kiev, and Washington is aimed at destroying the Russian Church and nation. Granting the legitimate Church autocephaly will set a dangerous precedent that will strengthen the Turk Bartholomew And American intentions to interfere in the life of all Orthodox Churches.

David12/23/2022 1:52 am
The UOC is autocephalous in all but name, but the time is coming where they may have to openly, clearly and firmly declare it so. If the MP truly cares about the UOC, they will not oppose such a move.

Gary12/22/2022 3:15 pm
Metropolitan Onuphry is in a very difficult situation. Let's all pray for him to lead his flock in the direction God desires.