On the first prayer in life Recently we had a conversation with our parishioners about the first prayer experience in our lives. I mean conscious prayer, when a person suddenly turns to God or saints for the first time in his life.

I personally remember such prayer very well. Ironically, it was several years before I converted to the faith and started integrating into Church life. And, strangely enough, it was at the time of my total lack of faith and even struggle against God, and when the Church annoyed me with the mere fact of its existence.

Then I was going to enter Russian Institute of Theater Arts (GITIS), and I had an icon of St. Nicholas the Wonderworker. Strange as it may seem (although this is probably not a rare case), but at that time for me God and the Church were separate, and St. Nicholas was separate too. I asked the saint to help me join the institute. And even during the exams I put my icon in front of me on the desk. And everything worked out for me and I was enrolled in the institute. But, alas, my true conversion didn’t occur until much later...

My speaking partners also shared stories about their first prayer experience--funny, sad and touching ones. But most of all I remember the testimony shared by our parishioner Galina.

She grew up in a typical Soviet family. Only her grandmother believed in God, and believed quietly so as not to annoy anyone. She neither put her icons in a conspicuous place nor prayed loudly. Occasionally she travelled somewhere far away to some priest. And even then Galya [a diminutive form of the name Galina.—Trans.] learned about this not from her grandmother, but from the grumbling of her parents:

“Grandma has gone to this pop1 again.”

Thus, on the one hand, Galina knew that “there is some omnipotent God”. But on the other hand, she knew that “you don’t need to believe in Him--all this is nonsense.”

She went to school. And one day, in the fifth or sixth grade, a new boy, Vanya2, joined their class. Very soon the classmates began to call him “Ivan the Fool”3.

True, Vanka seemed strange and “not of this world”. "He’s not all there", as someone used to say. He was a poor student, did not take part in noisy children's companies and tricks, and did not respond to pokes and kicks, only smiling perplexedly. he was often sick... And, as you know, no one likes someone who is weak and sickly.

And Vanka never refused when classmates told him to do something.

“Fool, give me the compote quickly!”

He gave, carried and brought obediently... And he smiled with that “idiotic smile” of his. Well, a “real fool”.

And the more helpful and quiet Vanka was, the more he annoyed everyone.

One day on the way to school the boys started bullying him. And the girls too.

"Whatever the fool does,

He does everything wrong,

Doesn't start from the beginning

“It was me who teased him like this,” Galina confessed. “Every time I remember it, I want to cry.”

And he went on walking quietly. Then someone tripped him up, and Vanka fell right into a puddle.

“We didn’t expect him to fall,” Galya told me. “We were even afraid that he would start complaining. But when the teacher in the classroom wondered why Vanka was wet and dirty, he did not tell on us, but said that he himself had fallen. Even Maxim (the ringleader in our class) came up to him at recess and mumbled: ‘Well done! You haven’t peached on us.’ And Vanka just smiled back. Thus our friendship began: not immediately, of course, but gradually. We offended him less often and got used to him.”

Some time passed, and Vanka's classmates realized that he was not an ordinary boy. They did not even realize--they felt it.

“You know, there are people who radiate warmth and light, as it were,” Galina proceeded. “We felt like this by his side. Vanka never took offense at anyone, never got angry. It seemed that he did not have this ‘function’ in his soul at all. He loved everyone and was ready to share everything with anyone. And most importantly, he did not demand anything in return. I have never met anyone like him.”

He was quiet, though. But not dejected and not weak. There was some kind of inner strength in him.

“We were teenagers: we could swear or do something else,” Galina recounted. “But in Vanka’s presence for some reason we tried not to say bad words. Although he paid no attention to it. And he never swore.”

Then everyone noticed that whenever there was a dispute in the class, Vanka's quiet word turned out to be decisive. He never insisted, and would just say:

And everyone understood him.

And once Vanka felt very bad right at school. Then everyone learned that he had serious heart issues. That's why he was so feeble and sickly.

”But he was also strong for the same reason,” Galina believes. ”He was often in hospitals, but initially we weren't told why. And after that incident everything became clear. He probably understood (it’s my personal opinion) that he could die at any moment, and somehow in his soul there was the primacy of things of primary importance over those of secondary importance. He didn’t go to church (none of us attended church back then), but it felt as if the Lord kept suggesting him something. He is very close to such people. God must have told him that the most important thing is love. That’s why Vanka hurried to love. And we all responded to his love, even though we were silly.”

So Vanka felt unwell and fell right in the classroom. His lips turned blue, and he started breathing heavily. The teacher ran to the phone to call an ambulance.

“And we, classmates, crowded around him: ‘Vanka, Vanka, what’s the matter with you?!! Vanka! Don’t die!’” Galina recalled. “And then he smiled so feebly. And suddenly at that moment I thought about my grandmother's God. I folded my arms across my chest and almost screamed, ‘God! Don’t take away our Vanka!’ And it was so sincere. I so feared that he would die now, and our quiet and kind Vanka would be no more and wouldn't smile anymore. And I saw one of my classmates crying; And another one, like me, also folded his hands across his chest and whispered: ‘God! Save Vanka!’ When the teacher came back and heard us praying, she scolded us—it was still the USSR... But I saw her turn away from us and make the sign of the cross on the quiet...”

Vanka did not die. After spending some time at the hospital he returned to school. Oh, everybody was so happy to see him!

“We visited him at the hospital with gifts. And we went to see his mother and grandmother at their home, supporting them,” Galina related. “They lived together. And although we didn’t talk about God anymore, we felt that both Vanka and our childish prayer had united us very much. In some sense, we became a family.”

Vanka died a year and a half before graduation. Sadly, his heart failed... The whole class came to bid final farewell to him and could not understand how they would live without him... Everybody was weeping.

“But my grandmother, who was still alive, told me: ‘Pray for him--and you will feel his presence.’ Yes, he was always with us until the end of school. Whatever we were doing or trying to decide, we always thought: ‘What would our Vanka say?...’ We remembered him.”

Years passed… Those children grew up and scattered in all directions. Times have changed. And once, during a class reunion, they started talking about Vanka and the day when he felt very bad in the classroom, and when they offered up their childish and clumsy prayers. They cried, they implored God to save him. And it turned out that the very spark that had lit their hearts at that distant moment, the trace that the first prayer in their lives had left in their souls, brought many of them to the Church. As if the Lord had touched their hearts. But it took them time to come to realize that...

“This is what my first prayer was like,” Galina concluded. “Thanks to Vanka. Yes, he brought many of us to God, albeit not immediately. You know, it's true what they say, ‘Acquire the spirit of peace and a thousand souls around you will be saved.’ Our Vanka was such that we felt warm by his side and changed. Our souls began to open to the Lord. Although we ourselves did not understand this right away. He was truly God's child--there are very few of them.”

1 In the Soviet era the word “pop” became a derogatory term for “priest”, whereas the officially accepted Russian word for priest is “svyashchennik”.—Trans.

2 Vanya and Vanka are diminutive forms of the name Ivan.—Trans.

3 An allusion to “Ivan the Ninny”, a very simple-minded yet lucky character (usually a peasant young guy) who often appears in Russian folklore and fairy tales.—Trans. “So the Last Shall Be First…”
Irina Krikheli

“So the Last Shall Be First…”
Irina Krikheli
My friend consoled her as much as she could and decided to ask her again: “Mother, do you agree to embrace the Orthodox faith?” The Bread of My Childhood
Tamara Fatakhutdinova

The Bread of My Childhood
Tamara Fatakhutdinova
My mother’s bread! Now you can’t get such bread anywhere... Times have changed, and many don’t know the value of bread. 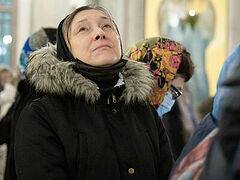 God Moves in Mysterious Ways
Irina Dmitrieva
She fell prostrate before the Iveron Icon, while I (understanding nothing at that moment except for the terrible fact: what would become of the poor young lady and her baby) began to implore the Most Pure Virgin for help.
Comments

Antonia12/28/2022 3:56 am
What an beautiful, quiet witness from one so young and ill. It was very moving to read about the children and even the teacher offering prayers for Vanka. Thank you for this translation. I always come away from these stories with peace and a sense wonder at God's incredible mercy. JMJ amr
×