The Patriarchate of Jerusalem has opened another kindergarten in Jordan.

The school was inaugurated by His Eminence Metropolitan Christophoros of Kyriakoupolis in the northwestern city of Zarqa in the presence of Archimandrite Athanasios (Qaqish), the spiritual head of the Zarqa Governorate, and Archimandrite Andrew (Shamia), the spiritual head of the Aqaba Governorate, reports the Greek Orthodox Patriarchal Schools of Jordan. The opening ceremony was also attended by the administration, staff, students, and parents of the school.

In his speech, Met. Christophoros praised the administration for developing such a high-quality kindergarten for the local parishioners and community.

OrthoChristian previously reported on the Patriarchate opening a special needs-equipped kindergarten in Amman, Jordan, in August 2021, another kindergarten in Anjara that December, and a school in Kerak in September 2022. 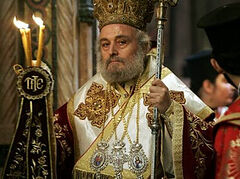 Former Patriarch Irenaeios of Jerusalem reposes in the Lord

Former Patriarch Irenaeios of Jerusalem reposes in the Lord
He died in a hospital in Athens, where he had been receiving treatment since 2019. His Beatitude was 83 years old. 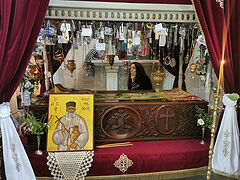 Feast of St. Philoumenos of Jacob’s Well celebrated at site of his martyrdom (+VIDEO)
St. Philoumenos was killed by a 37-year-old mentally ill Jewish man who first threw a grenade into the monastery and then struck him with an axe. 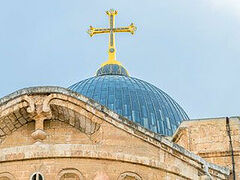 Israeli Supreme Court rejects Jerusalem Patriarchate’s appeal to overturn expropriation of property at Jaffa Gate
The Patriarchate considered the court’s decision as unfair and having no legal or logical basis, as the radical organization and its backers and supporters have used crooked and illegal methods to acquire Christian real estate in one of the most important sites of Arab Islamic and Christian presence in Jerusalem.
Comments

m. Cornelia2/1/2023 10:59 am
George: Jumping to conclusions? Firstly, that she is wearing a headscarf does not necessarily mean she is Muslim. Orthodox women also wear headscarves. Secondly, if she is Muslim, that she is standing next to the bishop does not mean she is running the kindergarten. Jordan is predominantly Moslem, but their government reps. have friendly relations with the Christians living there.

Michael 1/31/2023 12:36 am
Great propaganda piece! Jerusalem Patriarch has more Greeks in its hierarchy than the ethnic people that they represent! Actually, they only have ONE Arabic bishop and ALL OF THE REST ARE GREEK!!! How did that happen, and why?
×