“American Indians may become the largest ethnic group in the American Orthodox Church.”

An interview with His Beatitude Jonah, Archbishop of Washington, Metropolitan of All America and Canada 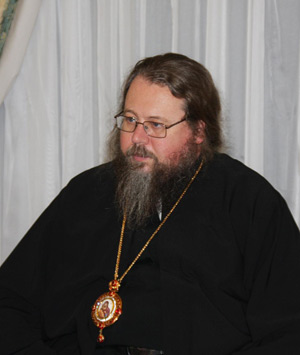 In early December of 2009, His Beatitude, Metropolitan Jonah of All America and Canada (Orthodox Church of America) visited Russia to celebrate the fifteenth anniversary of the OCA’s representation in Moscow. Correspondent Miguel Palacio took the opportunity to talk with Metropolitan Jonah about the OCA’s presence in Latin America.

– Your Beatitude, in which Latin America countries is the Orthodox Church in America represented?

– Our jurisdiction extends to Mexico. We used to have parishes in Argentina, Brazil, Peru, and Venezuela as well, but one of them joined the Russian Church Abroad, while others simply closed.

Several communities in Latin America want to join the American Orthodox Church. We would be happy to receive these faithful people, but there would be no one to take care of them because we have very few clergymen who speak Spanish or Portuguese.

One priest, who I hope will soon become a bishop, began a mission in Ecuador, in the city of Guayaquil, where there is a large Palestinian colony. Unfortunately, his good initiative has fizzled out. I have heard that many Palestinians also live in Central American countries, one of which is El Salvador. It is curious, but they do not go to the Antiochian parishes, and are requesting to be received under our omophorion.

The Constantinople and Antiochian Patriarchates prefer to pastor the Greek and Arab diasporas. We do not understand this. The Church should give pastoral care first of all to its local spiritual children. This is our principle in the Orthodox Church in America.

– When was the Mexican exarchate organized?

– The Mexican exarchate has existed since the 1970’s. At that time, the Bishop of the Mexican national Old Catholic Church, Jose (Cortez-y-Olmos), strengthened contact with our Church and became Orthodox, together with his entire community. Thanks to his labors, hundreds of Mexicans have become immersed in the Orthodox Faith.

Not long ago, five thousand Indians from twenty-three areas in the state of Veracruz were baptized into Orthodoxy. However, there is only one priest to serve that entire mass of people. In general, the Mexican exarchate has very few clergymen. They are all Mexican, including the ruling hierarch, Bishop Alejo (Pacheco-Vera).

– Have you ever been to Latin America?

– I have only visited Mexico. Now I am getting ready to visit Guatemala. A friend of mine lives there — Abbess Ines (Ayau Garcia), the superior of the Holy Trinity Convent, which is under the jurisdiction of the Antiochian Patriarchate.

In Guatemala, a group of thousands of people who would like to become Orthodox have attracted my attention. Most of them are Mayan. If we take these Guatemalans in, as well as other members of the native Latin American population, then American Indians may become the largest ethnic group in the American Orthodox Church. I, personally, would be very happy about that.

– I have the warmest feelings for American Indians. I studied anthropology in the university, and was drawn to the Mayan and Aztec cultures. These were enormous, amazing civilizations.

I like Latin America as a whole — its art, music, literature, and cuisine. Latin Americans love life; they are open and hospitable people. I grew up in California — one of the most Hispanic states in the U.S. I was able to learn some Spanish from my Mexican friends (although I speak Spanish poorly). The priest who united me to the Orthodox Church was a Mexican. His name was Fr. Ramon Merlos.

– What does missionary work amongst Indians in the U.S. have in common with that amongst those of Latin America?

– To be honest, I do not yet know… Our Church has missionary experience in Alaska, where one remarkable priest serves — Archpriest Michael Oleksa, an anthropologist. He is a Carpatho-Russian; his wife comes from the indigenous Yupiks. Fr. Michael wants to conduct a conference of Orthodox Indians of America. This would be an extremely interesting event.

When Fr. Michael was rector of the seminary, he invited the Guatemalan community that was thirsting for Orthodoxy to send two members to receive a theological education. The idea was, of course, a good one. But people who are accustomed to a tropical climate are not likely to endure the freezing temperatures of Alaska.

– Are there Latin Americans amongst your parishioners in the U.S.?

– Of course there are. In California, thirty-five percent of the population is Latin American, and the percentage is even larger in Texas. There are Latinos both amongst the flock and the clergy in our Church. Studying in St. Tikhon Seminary is a Mexican with Indian roots, named Abraham. He has the obedience of sub-deacon. One sub-deacon in San Francisco is Colombian. At the end of November, I blessed a new convent dedicated to the Nativity of Christ in Dallas, the superior of which is Brazilian.

– What, do you suppose, attracts Latin Americans to Orthodoxy?

– Latinos love our Liturgy and icons; they are captivated by the deep veneration of the Mother of God within the Orthodox Church.

I have to say that the Catholic Church is quickly losing its influence in Latin America, and the reason for this is its close association with the upper social classes. A significant portion of the poorer classes, which make up the majority of the region, have become disillusioned with the Catholic pastors, and have aligned themselves with protestants, Mormons, and other sectarians.

Metropolitan Andres (Giron), the head of the St. Basil the Great Order of White Clergy in Guatemala, used to be a Catholic priest. He saw that his Church leaders were oriented towards the wealthy; in the 1990’s he left the Catholic Church, because he wanted to work for the people. Not long ago, Fr. Andres said to me, “I am old and ailing. Please take my people into your Church for the sake of their salvation.” It would be hard to call his community Orthodox, but it is gradually coming to know Orthodox teachings, and partaking of the traditions of the Orthodox Church. Besides those in Guatemala, Bishop Andres has opened parishes in Los Angeles, San Francisco, and other U.S. cities where his countrymen have settled.

– Are you not afraid of some conflict with the Catholic Church? After all, Latin America is still considered the “largest diocese of the Vatican.”

– There will not be any conflict. The Catholic Church relates to Orthodoxy with loyalty. Furthermore, I see no little potential for collaboration with the Catholic Church, first of all in the struggle against sectarianism. Episcopalianizing American Orthodoxy, Round II
Rod Dreher
The essay posted on the Orthodox Church in America’s youth ministry page — the one by Boston priest Fr. Robert Arida, calling for a rethink on homosexuality — has really stirred the pot among the relatively small community of American Orthodox. A New Chapter in the History of Our Church
A talk with the official representative of the American Orthodox Church in Moscow, Archimandrite Zacchaeus Wood

A New Chapter in the History of Our Church
A talk with the official representative of the American Orthodox Church in Moscow, Archimandrite Zacchaeus Wood
Interview with Archimandrite Zacchaeus Wood
Since Metropolitan Jonah lived here in Russia, I think that his love for the Russian Church will be entirely natural and sincere, and this is very important. We always remember that we received autocephaly from the Russian Orthodox Church, and the relationship between our churches for all of us is vital.
Comments

Avery Romancito6/25/2018 5:18 am
Being native American. My spiritual journey seems to be leading me to embrace the orthodox way of life. The teaching of Gods Essence and Divine Energies , fasting etc.i understand. The simple, authentic spirituality I love..thank you!...we need churches in new Mexico, Arizona etc. Missionary efforts among us natives is in great demand

Marianne Poulos11/3/2014 6:12 am
Father Andres fell asleep in the Lord this past year. May his memory be eternal and may the Orthodox Church receive the Mayan people!