On the fortieth day of Fr. Daniel Sisoev’s martyric death: the transcript of his last Sunday sermon. 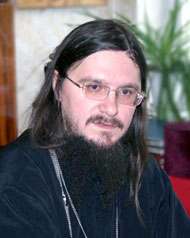 I congratulate you all on this Sunday, the day of Resurrection! And now, in these days of autumn, I wanted to make you aware of a temptation that comes more and more often among people. This temptation is the constant squabbling of people among themselves. Unfortunately, there is a sense that lately the enemy of the human race is exclusively occupying himself with poisoning Christians especially among themselves, for the most paltry reasons. People have indeed become so unusually agitated and are continually in some abnormal, inhuman state of soul.

Of course, on one side, psychology says that an increased autumnal stress is occurring among people. But on the other hand the most important thing is that people have forgotten that they are—first of all—Christians, children of the Father in Heaven, that we are brothers and sisters amongst each other because we all came from the same Baptismal font, are all anointed by the same Holy Spirit through Holy Chrism, that we all partake from the same Holy Chalice. And, incidentally, the Lord says “Blessed are the peacemakers: for they shall be called sons of God.” He who reconciles people does a great virtuous work.

And the Apostle Paul says, If it be possible, as much as lieth in you, live peaceably with all men. Nonetheless, Orthodox Christians constantly fall into this trap, “What party do you belong to?” “What is your relationship to a certain trend?” “Whose are you?” Isn’t it so?

The same was true for the church at Corinth. Whose are you? Paul’s? Of Cephas? Christ’s? Of Apollos? What does the Apostle say? Is Christ divided? Was Paul crucified for you? Or were ye baptized in the name of Paul? Truly, it is not becoming for a Christian to relate himself to any party. We all belong to the party of our Lord and Saviour, Jesus Christ. You and I are Christians. We are His portion. We are chosen by God from all the nations of the Earth. We are the chosen of God. We are a royal priesthood. People separated from the darkness by God, brought to the miraculous light of Divine love.

Such a thing is displeasing to the Lord. Such a thing is truly from Satan, who wants to divide Christians and destroy peace. Remember that the fate of the world and those countries where we find ourselves (including Russia) does not rest on the actions of atheists. What can you take from them? Understand that such a person is in darkness and under the influence of the devil.

Naturally, concerning those of another group, he hates and is angry; you can’t even expect anything else from them. But something more astonishing is that people, instead of remembering that we are indebted to live in peace, begin to bring that despicable rebelliousness of the world into the Holy Church. This, obviously, proceeds from the mouth of the devil. It is precisely he who inspires us with his monstrous, evil idea to divide us amongst ourselves.

We cannot live like those who are without. As the Lord has said, How will they know that you are my disciples? Because you have love for one another. But if, as the apostle says, You hate one another, envy and offend, take heed that ye be not consumed of one another.