The Feast of the Holy Trinity (Pentecost) 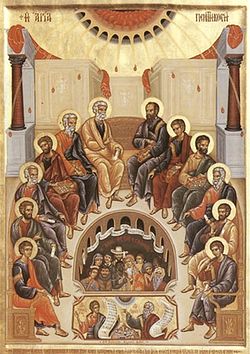 Even in apostolic times, it was customary to begin the Church year with the celebration of the Savior’s Resurrection. The second oldest Christian feast day was the day of Pentecost, on which the Holy Spirit descended upon the Apostles. Tradition has it that the first Christian church was built on Mount Sion, at the place where the Apostles were gathered on the day of Pentecost. The church was not destroyed even during the general destruction of Jerusalem by the Roman legions in 70 A.D. In one fragment from a work by the Holy Hieromartyr Irenaus of Lyon a recollection is preserved of the feast of the New Testament Pentecost (from the end of the second century). It was also called the day of the descent of the Holy Spirit in the early Church. On that day, the Church was born. From that time, the grace of the Holy Spirit has been present in the life of the Church, and fulfills all its Sacraments.

The services for the feast of Pentecost were formed and enriched gradually, through the efforts of St. Gregory the Theologian (fourth century), St. Roman the Melodist (fifth century to the beginning of the sixth century), Sts. Cosmas of Jerusalem and John Damascene (eighth century), Metropolitan Theophanes of Nicea (ninth century), and Emperor Leo (886–912). The stichera by the Emperor Leo, Come, let us worship the Three-hypostatic Godhead, marks the beginning of the celebration of Pentecost as a feast honoring the Three-hypostatic God—the Holy Trinity. The Lord Himself indicated to His disciples the particular theological meaning of this great New Testament event when He said, But when the Comforter is come, whom I will send unto you from the Father, even the Spirit of truth, which proceedeth from the Father, he shall testify of me (Jn. 15:26).

During the seven weeks of Pentecost (from Pascha to Pentecost), full prostrations are not allowed by the Church typicon. At the completion of this period, three “kneeling” prayers are read, which were composed by St. Basil the Great. However, because throughout the whole year full prostrations are not allowed on Sundays, and the Feast of the Holy Trinity is always on a Sunday, immediately following the Divine Liturgy come the Vespers service for Monday, during which honor is rendered to the Holy Spirit. During this service, we kneel for the first time since the burial service of the Epitaphion.[1]

The custom of adorning the church with tree branches, flowers, and grass goes back to ancient times. The Old Testament Pentecost was the feast of the first harvest (Ex. 23:16). People brought the first fruits of their harvest and flowers into the court of the Temple. In New Testament times, the trees and other plants in the church symbolize the renewal of people through the power of the Holy Spirit which has descended.

[1] The Epitaphion, or burial shroud of the Lord, is carried by the clergy into the altar at the burial service during the Matins for Holy Saturday. —Trans.