Orthodox monk, Father Themi, speaks to DINA GEROLYMOU, about how he is progressing with his missionary work in Sierra Leone and his commitment to improving the basic living conditions of the people he ministers to. 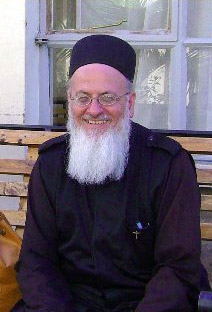 Listen to him explain about poverty and the money economy and you wonder what he would have been if he hadn't chosen to become a missionary.

Listen to him talk about Africa and you realise that, for Fr Themi, injustice is the face of sheer evil.

Fr Themis doesn't talk like a priest - he is in fact a monk - or even a missionary.

He does not talk about salvation, the soul or heaven and hell.

He talks about poverty, survival, war, devastation, corruption, people living in the fringes, the gutter, the dispossessed, the wretched, the abandoned.

In short, he talks about justice and the hypocrisy of our so called civilised world.

Finding the location of Fr Themis presentation on the Orthodox Mission in Sierra Leone is not easy.

Unless you were notified by one of his supporters you wouldn't know he is in Australia and that he has a new DVD out on the progress of the mission he is heading.

The presentation takes place in an inner city church hall on a weekday evening. There is no sign anywhere to tell you about the presentation or direct you to the right place.

Only the light at a side door suggests that people might be in the building.

A few have gathered at the church hall to listen to the monk who has been living and working among the poor of Africa.

Fr Themi stands in the middle of the room and lays down the facts about the place he calls home: 11 years of brutal civil war, often fought with child soldiers, has left the country in utter devastation.

There is an almost total absence of infrastructure in one of the poorest countries in the world despite its incredible wealth in natural resources: Sierra Leone is a producer of top quality diamonds and other minerals.

The country has been peaceful for the last seven years but the wounds of war dominate the country's daily life: thousands of orphans, amputees, disabled, homeless and unemployed.

Life expectancy is around 41 years for men and 44 for women.

Children are left with no schooling, millions live in inhuman conditions, health care is virtually non-existent.

"Their daily concern is survival" says Fr Themi "I'll show you the DVD in a second and you can see for yourselves."
Fr Themi's presence dominates the room, his energy takes over, his words are measured, the tone of his voice is balanced, his gestures are smooth and powerful, and his gaze is penetrating as he makes eye contact with everyone in the room.

One is thankful that he uses his charisma to help the needy.

Healing the Wounds is Fr Themis' priority in Sierra Leone and the title of his new DVD which was edited gratis at George Miller's production facilities.

Born in Egypt to Greek parents and raised in Melbourne, Archimandrite Fr Themistoklis Adamopoulos has been heading the Orthodox mission in Sierra Leone for the last two years.

The path, however, has not been always clear for him.

He has been an atheist, a rock'n'roller and a radical Marxist in his youth.

One can argue that, in some ways, he has not strayed too far from those days: he stands up for justice, helps the disadvantaged and rocks Africa – only this time as part of a religion rather than a band!

He studied at Melbourne University and he could have been a brilliant academic and a much quoted 'expert' had he stayed in his chosen field of political science.

In the 1960s he created the band The Flies and their concerts attracted thousands of fans -screaming women not excluded - and Themi Adams, as he was known back then, became a celebrity.

But neither his academic studies nor the music circuit gave Themi Adams the answers he was seeking. He turned to Christianity and went back to his cultural and spiritual roots, Orthodoxy.

The teachings of Jesus not only appealed to his restless nature but totally captivated him.

He chose to become a monk, then a priest and then a missionary.

Working among the poorest of the poor became his purpose in life.

He went to Africa and worked in Kenya and then Sierra Leone.

Mother Teresa was his inspiration.

Now he has become an inspiration to others.

Fr Themis provides the people of Sierra Leone with services that we in Australia take for granted.

He and his team of mostly local staff have created St Moses the African Orthodox Village with housing for the disabled, schools, a guest house, a church and a priest's house.

A clinic will soon be added and Fr Themi looks forward to the commencement of its building as soon as he returns to Sierra Leone.

In his two years in Sierra Leone he has made significant inroads in the local community. 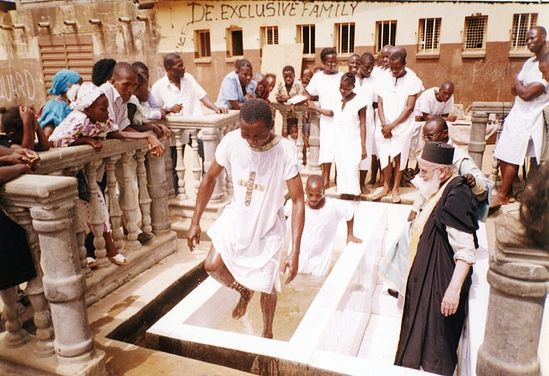 Baptism of Sierra Leonians.
"The secret of the mission is to respect the Africans and to understand them," he says with unshakable conviction.
" The war has left so many people disabled" he says "and because of the war there was no vaccinations in the 80s, the polio cases had reached catastrophic proportions. That has contributed to the high number of disabled in the country".

Fr Themis says that one day he got a phone call from the government asking him to do something for a group of about 150 disabled squatting in a run down building in Freetown, the capital of Sierra Leone.

The focus of the Orthodox mission in Sierra Leone has been education and training.

It has established a training program for women prisoners, a tailoring school, the Freetown Orthodox Christian School and an Orthodox College.

The Freetown Orthodox Christian School with over one thousand students and sixty teachers, offers classes from prep to junior high school.

However, Fr Themis has finalised the plans for a senior high school and once the college gets underway the Orthodox mission will be offering a complete education system.

The Orthodox College, a tertiary institution, will have very low fees and will "take those who qualify for uni but do not have the money to pursue academic studies" says Fr Themis.

The college offers a bachelor of education in early childhood and Fr Themis has managed to have the curriculum designed through Monash University.

In addition, over 100 thousand books donated from various Australian universities are already in Sierra Leone waiting for the completion of the college's library.

But Fr Themis does not stop there. His long-term vision is for a prosthesis clinic to give a new lease of life to the amputees.

"We'll need a lot of money for this but nothing is impossible" he says and it is obvious that he already has a plan.

He says that a foundation or corporate sponsorship can make the clinic a reality and improve the lives of thousands of people.

The amputees are one of the legacies of the civil war.

One of the rebels' trademarks was to hack off the hands or feet of their victims regardless of age.

Some of those who bear the greatest responsibility for the brutalities, from both sides, are facing a UN-backed war crimes court.

In April three senior rebel leaders were sentenced to long jail terms for atrocities committed during the civil war.

Fr Themi's work is funded mainly through the organisations Paradise Kids 4 Africa and Light of the World Australia.
A lot of help has also come from missionary societies in Greece.

He wraps up the presentation with a quote from Mao Tse Tung but when he has answered all the questions he turns to the East, makes the sign of the cross and starts praying. Ebola Virus And The Orthodox Mission’s Challenge In Sierra Leone
The present West African epicentre of this non-curable killer infection is in Guinea (Sierra Leone’s northern and eastern border neighbour). Now it has started to spread beyond the Guinean borders. Fr. Daniel 11/3/2010 3:57 pm
Fr. Themi is really a trying his best for the poor. He paid a visit to Accra in Ghana. Let us all give him the needed support as he tries to bring happiness to those in sorrow.
×