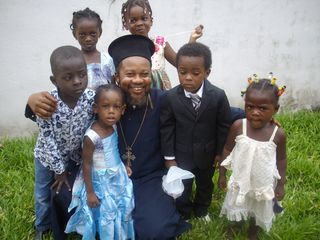 Priest Jeremiah Behanzin, rector of the Orthodox parish in the Ivory Coast capital of Abidjan, told of the catastrophic situation in his community in a country where order has completely deteriorated, reports the French Orthodox website, Orthodoxie.

"It is with great sorrow that I report the situation in our Orthodox community in Ivory Coast. The country is becoming unbearable due to the absence of safety. The army and insurrectionists shoot at innocent people. Every day we lose people. At the present, we have more than 5,000 people, including our faithful, who have become refugees because of the war. People have abandoned their homes, taking only their children and the minimal baggage they can carry on their heads, because they are met with gunfire everywhere. Because of the military activity, it is impossible to find a place to sleep, even on the street or at the stations," relates Fr. Jeremiah.

"In our region, Abobo Baoule, where the Orthodox Church is located, militia, police, and insurrectionists are shooting all the time, and we can no longer sleep peacefully. We are afraid that the situation in the country will get even worse. The banks are closed. We have nothing more to eat," the Orthodox priest said.