The Immovable Ladder at the Church of the Holy Sepulchre 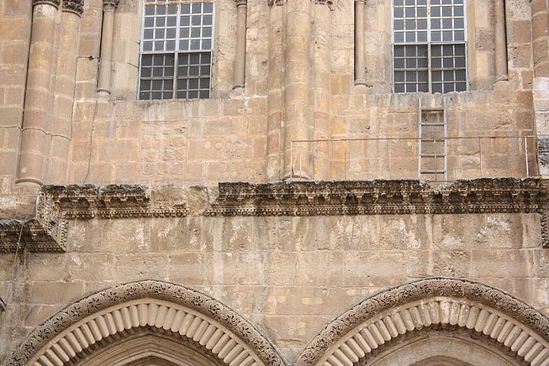 Venerated as the site of the crucifixion, burial, and resurrection of Jesus, the Church of the Holy Sepulchre is perhaps the world’s most sacred Christian pilgrimage site. It is also the location of a 150-year-old argument over a ladder.

Under an 1852 mandate, the care of the Church of the Holy Sepulchre is shared by no less than six Christian denominations: the Greek Orthodox, Armenian Apostolic, Roman Catholic, Coptic, Ethiopian, and Syriac Orthodox churches. The Holy Sepulchre’s edifice is carefully divided into sections, with some commonly shared, while others belong strictly to a particular sect. A set of complicated rules governs the transit rights of the other groups through each section on any given day, and some of the sections of the church remain hotly disputed. Arguments and fistfights over territory and boundaries are not uncommon.

One such area is a small section of the roof which is disputed between the Copts and Ethiopians. At least one Coptic monk at any given time sits there on a chair placed on a particular spot to express this claim. On a stifling summer day in 2002, a monk moved his chair eight inches to find shade. This was interpreted as a hostile act and violation of boundaries, and 11 were hospitalized after the fight that ensued.

The Church of the Holy Sepulchre’s “immovable ladder” is a centuries-old symbol of this extreme territoriality. During the early 1800s, a man belonging to an unknown sect placed the ladder on a ledge against an exterior second-floor wall of the church. Due to the imposition of the status quo and the fear of inciting violence, no one has dared touch it since.

Excepting, of course, the time in 1997 when a mischievous tourist named Andy plucked it from the ledge and hid it behind an altar, where it remained undiscovered for weeks. The ladder has since been put back into its “appropriate” spot. 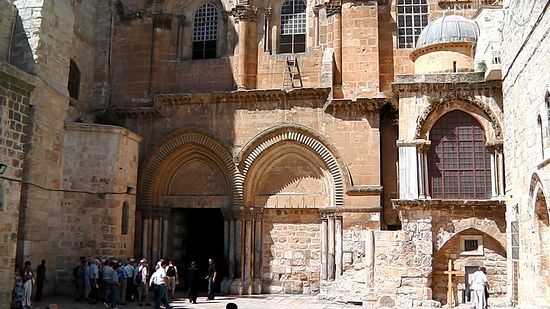 christos michael6/12/2013 3:57 am
these extremes are done from everybody exept the orthodox. did you know thay above the roof of the Holy Tomb was a cross but some decades ago, i think the roman catholics, am not sure, did not allow to the orthodox to put the cross back after cleaning, just because the greek monk delayed for some weeks in cleaning. so for them was a victory because the orthodox lose one right.
another right the catholics won, was to keep an open ladder near the entrance, inside of the temple, because the orthodox did not say to them to remove it when they should.
so you understand in what pressure are the orthodox there,
if they do not do everything on time, they lose their, our rights
one armenian did threat to kill one greek last year in may or june
ofcourse their abbot said we are sorry, and we will punish him... but ofcourse the armenian stayed there. these things are usual