Reports from Ma'loula: either Islam or beheading 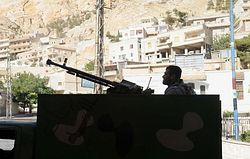 Christians from Ma'loula, seized by militants, are being forced to accept Islam, reports Linga. Sources in Ma'loula informed the agency that the militants were threatening to kill them unless they accept Islam.

"Where is President Obama to see what is happening to us?" the agency's spokesman says.

One of the residents has reported that a great number of bearded militants entered the town, shouting "Allahu Akbar", and attacked the Christian houses and churches. They killed several people soon after Ma'loula had been seized. "We heard shooting and I saw corpses in the middle of Balharh street," he said. "Where is Obama to see what is happening to us?!"

Another resident has related: "I saw five bearded people who were threatening Christians and saying that they must accept Islam or they would be beheaded". Another citizen has reported that he saw one church burning, and how a militant entered another Church and stole something from it.

The residents of Ma'loula are asking for prayers. 'If my son is in Jihadi John beheading video, he should be executed,' says father

'If my son is in Jihadi John beheading video, he should be executed,' says father
The father of a medical student turned jihadist from Cardiff fears his son appears in the Islamic State's latest execution video and says "he must face up to what he has done". At least 73 variations of Islam exist in the world — orientalist

At least 73 variations of Islam exist in the world — orientalist
President of the Religion and Politics Institute, member of the Council for Cooperation with Religious Associations, orientalist Alexander Ignatenko, claims that Islam exists in various regional forms.
×