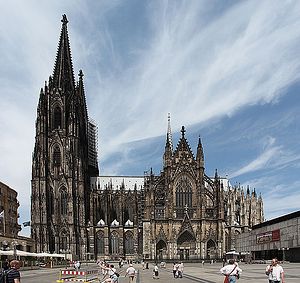 Cologne Cathedral
The court of Cologne has sentenced a member of demonstration in support of the Russian punk band Pussy Riot, to a fine of 150 euros, reports the local newspaper Kölner Stadt-Anzeiger.

Patrick H. has been found guilty of preventing the performance of a religious service in the Cologne Cathedral and has been obliged to pay 150 euros.

The judge stressed that the opinion of the protester regarding the fate of Pussy Riot deserves respect; however, he should have chosen another form of protest. The judge has agreed with the public prosecutor's office that freedom of expression of one's own opinion is limited by the major rights of other citizens, including freedom of performing religious rites. This sentence came a result of consideration of the appeal lodged by Patrick H. in response to an earlier ruling of the public prosecutor's office, imposing on him a suspended fine of 1.2 thousand euros. Such a measure provides for real payment of a fine provided the delinquent is exposed as a law offender for the second time.

Together with Patrick H., the public prosecutor's office has fined as a suspended sentence the second member of the demonstration in the Cologne Cathedral, but he did not appeal that judgement. The case against another, female member of the protest, is being tried in the court of Aachen where she resides.

The protests against the Russian punk band’s prison sentence took place in the Cologne Cathedral in August 2012. Two young men and one young woman in mulitcolored clothes and balaclavas entered the Cathedral during the Mass. They began chanting slogans with calls to release the Pussy Riot members and other political prisoners, and they also attemtped to unroll posters on the altar. The activists were turned out of the cathedral by the porters who called the police. Americans protest P—Riot singers and demand revocation of their visas

Americans protest P—Riot singers and demand revocation of their visas
The website We the People has posted a petition demanding the revocation of U.S. visas for Nadezhda Tolokonnikova, Maria Alekhina, Peter Verzilov because of their immoral actions and illegal participation in riots in Ferguson and New York.