Ethiopia Celebrates Meskel, A Christian Holiday All Its Own, With Yellow Flowers And Blazing Bonfires

A massive bonfire blazed in the central square of Ethiopia's capital city, Addis Ababa, on Thursday night. But by Friday morning, the mess had been swept away, leaving nothing but a giant spot of soot on the asphalt. 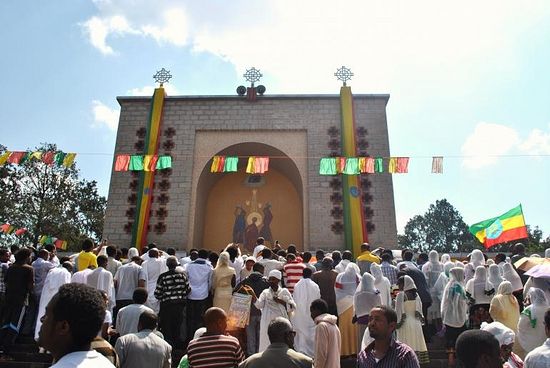 Thousands of people had flocked to the arena, called Meskel Square, to watch the ceremonial lighting of the fire for the eve of Meskel, a national holiday also known as the Finding of the True Cross. Ethiopians from across the country -- and visitors from around the world -- carried yellow daises, wooden crosses and wax candles as the pile of wood burned down to the pavement. Smaller bonfires were lit after sunset throughout the city, in backyards and on street corners, and celebrations continued throughout the night.

On Friday morning, the square was still buzzing; Orthodox Christians, many with soot on their foreheads in the shape of a cross, congregated at Meskel Square or paid a visit to the nearby Estifanos Church. After the spectacle of Meskel eve, the holiday itself is a time for rest, family togetherness and feasting -- though Sept. 27 fell on a Friday this year, a fasting day, which means that Orthodox Christians will have to abstain from meat. 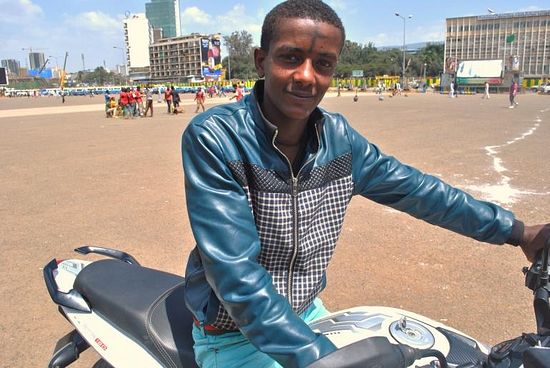 A young man wearing the sign of the cross rides his motorcycle around Meskel Square on Sept. 27, 2013. Photo: IBTimes/Jacey Fortin

"Families come together for the ceremony," said Johannes, 34, who is pursuing his Master's degree in Addis. "It's a celebration to join people together, hand to hand. For the people, for God, for the government, and for prayer."

Legend has it that on this day around 330 AD, St. Helena -- who is known as Nigist Eleni in Ethiopia and was the mother of Rome's first Christian emperor, Constantine -- found the cross on which Jesus had been crucified. In accordance with a revelation she'd had in a dream, Helena burned a giant pile of wood and frankincense. The smoke rose into the sky and then arced back down to earth, showing her the spot where the cross had been buried. Fragments of the cross were distributed to churches around the world, and one found its way to Ethiopia, where it is now said to be buried under the Gishen Mariam Church in the northeastern Wollo region. Ethiopia, which has one of the most devout Orthodox communities in the world, is the only country that celebrates the finding of the cross on a national level.

The Meskel festival is about 1,600 years old, but it wasn't always celebrated this grandly. During the 1970s and 80s, when Ethiopia was ruled by a Marxist military junta called the Derg, religion took a backseat to politics and the giant bonfire was banned from Meskel Square. During that time, Ethiopians suspected of supporting the resistance were often killed -- up to 500,000 people died during the Red Terror, a period of government-backed brutalities during the mid-1970s -- or detained. Johannes himself was only 16 when he was arrested and thrown into prison for one year. "At that time," he said, "there was no religion." 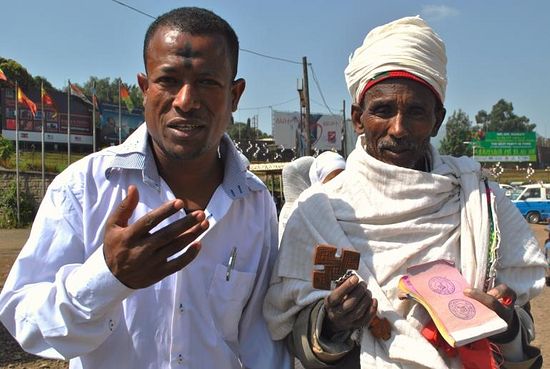 Johannes, 34, who wears the mark of the cross on his forehead to celebrate the holiday Meskel, stands with an Ethiopian Orthodox Christian clergyman. Photo: IBTimes/Jacey Fortin

The Derg fell apart as the Soviet Union, its biggest benefactor, withdrew from the world stage during the late 1980s. It was ultimately defeated by the Ethiopian People's Revolutionary Democratic Front, or EPRDF, a coalition of rebel groups that has since become the country's ruling party. Today, 63 percent of Ethiopians identify as Christian, two-thirds of whom are Orthodox, and the churches are packed with worshippers on holidays like Meskel.

Even non-Christian Ethiopians have reason to rejoice on Meskel; the festival marks the end of the rainy season in Addis Ababa. Since June, the city -- which sits at an altitude of more than 7,000 feet (2,200 meters), much higher than the rest of the country -- has been cloudy, wet and cold. But sure enough, the sun shined brightly all day Friday, and it's expected to keep shining for nine more months until the rains come again.

Now is also the time of year for Meskel daisies: bright yellow blossoms that bloom all across the country. Families have been collecting them all this week in anticipation of the festival; the flowers were used to decorate stacked wood for the bonfires, and women and children all over the square on Friday carried little bouquets to celebrate the changing of the season. 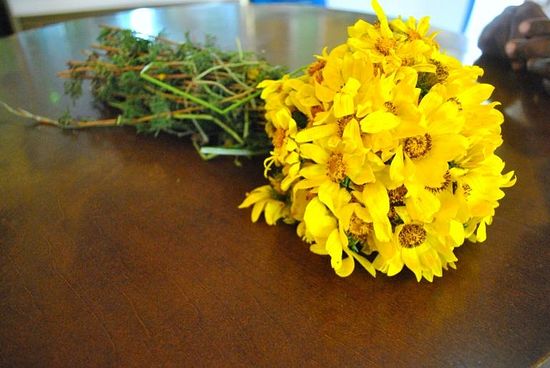 As the only country on earth to celebrate Meskel, Ethiopia is petitioning UNESCO to register its annual celebration in Addis Ababa as a cultural heritage experience. The Foreign Ministry says the holiday "deserves this designation because of the ancient nature of the celebration, its color and significance and the attraction it has for a growing number of tourists as well as the immense participation of the society and of people of all ages which adds to its inimitable quality." Ethiopia: In Quest of Divine Promise
In a dark, sooty room lit with a blaze emanating from a handful of traditional ovens, men stir dough and bake in absolute silence. While some keep the fire burning by inserting chopped woods into the oven, others pile the dough on to the clay oven. Famed Russian explorer shown Ark of Covenant
The world-famous Russian traveler and explorer Fyodor Konyukhov has become the first European to see the Ark of the Covenant where the stone tablets with the Ten Commandments communicated to Moses by God on Mount Sinai are believed to have been put.
Comments

ayelen egesse10/4/2013 8:36 pm
Nice pice of article. Please add to it that the relevant part of Gospel will be preached in every consistuencies and churches during these days, which makes the Finding of the True Cross and the energy behind the celebration so alive each year- christians be reminded the cost paid by our Lord Savior Jesus Christ and figures like Heleni for us to be here in grace and mercy.
×