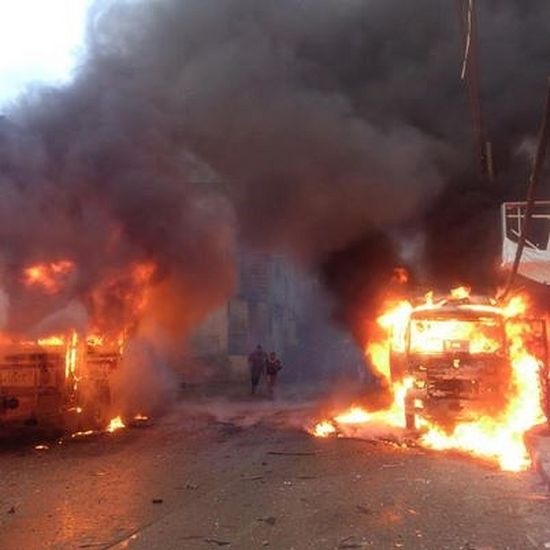 Newspersons of the electronic edition Salam1 report that militants of the "opposition" terrorist group, "The Islamic State of Iraq and al-Sham" (Giish) have burned down a Church in the frontier town of Tel Abyad, situated to the west of Rakka. The arson of the church was preceded by an act of vandalism: the extremist had stolen precious vessels, while crosses and icons had been cut into pieces and broken down.

The incident took place against the background of an increasing number of disturbances in the region. Thus, in the city of Rakka (district 17) numerous conflicts between the "opposition" and the Syrian army have been registered. Similar incidents are happening in the city of Deir ez-Zor, where the government forces repulsed an attack by the unit of Giish and Jabhat Al-Nusra in the Al-Roushdiya neighborhood, and as a result around 12 militants were killed. At the present time a battle for the city airport is taking place, during which the unit commander of Az-Zahra of the "Free Syrian army" Adnan al-Assaf was killed.

The sources report that armed conflicts are taking place in Homs suburbs as well, between the villages of Sikra and Ar-Rayyan. Believers burnt alive in Donetsk airport
Orthodox believers suffered from the attacks of Ukrainian militants against the International Airport in Donetsk on May 28.

In the capital of Crete, churches vandalized and icons burned
Cases of vandalism in churches of Heraklion and graffiti in Arabic left by criminals, which have become more frequent, are causing the authorities and the Archdiocese of Crete serious concern. A village burned down, tribal Christians forced out by Muslim settlers