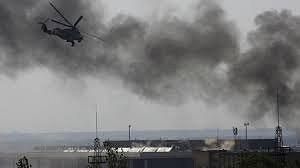 Orthodox believers suffered from the attacks of Ukrainian militants against the International Airport in Donetsk on May 28.

"Donetsk Orthodox believers, after a procession with cross around the Donetsk Region Administration, went to the airport to stand between the struggling sides and stop bloodshed. But militants burnt them alive," Vice-President of the Donetsk People's Republic Andrey Purgin told the Izvestia daily.

According to him, their bodies are laying together with others before the building of the airport. "We don't known, how many of them are there."

DNR leader Denis Pushilin noted that it was impossible to take the bodies as snipers opened fire against everyone who tried to come closer to them.