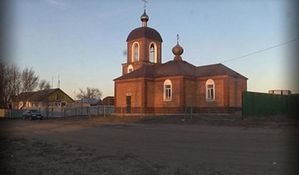 A 18th-century Cross has been stolen from the Church of the Kazan Icon of the Mother of God in the village of Daryinskoye in West Kazakhstan. This happened at night before Sunday, November 24, 2013, reports Tengrinews.

It has been reported that the robbers penetrated the building through a window. The Orthodox Cross was the only stolen valuable object.

"It was a pectoral cross made in 1797, produced as early as under the tsar Paul I. It was given to my father who is also a priest, and when I became a priest, my father gave it to me," said Archpriest George. The approximate cost of the stolen Cross is 500 thousand tenge. It has been reported that the Sacred object was stolen from under the altar-cloth of the Church.

"Two Crosses lay there. One of them was made of brass and the other one of silver with gold backing. The latter was taken away. Various gold decorations, left by parishioners, also lay on the icon under the glass. But they cannot be seen behind the glass. The robbers have not taken them either," explained the Priest.

The Church of the Kazan Icon of the Mother of God had already been robbed twice. Then the robbers took away money donated by parishioners, and building materials. According to the police, an investigation into the theft is ongoing, reports Golos Rossii ("Voice of Russia").

Albanian police confiscates over 100 stolen Icons
A police representative said that the stolen things had been intended for selling abroad.