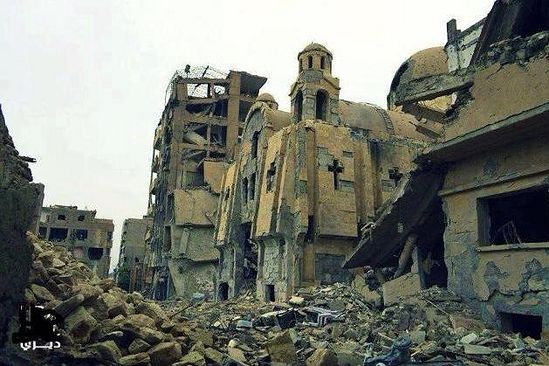 Militants in Syria have destroyed over 60 Christian churches and monasteries, and more than 70 thousand Orthodox residents of Homs, and more than a half the Christians of Aleppo have left their homes, reports Interfax.

These statistics was given by the ambassador of Syria to Russia Riad Haddad at the meeting of the inter-factional deputy group in defense of Christian values, held by the State Duma in Moscow.

According to R. Haddad, in recent days the Damascus quarters of Kasaa and Bab Touma, both inhabited mainly, by Christians, have been subjected to regular bombardments by the terrorists: over 50 shells have been fired in all.

He has thanked Russia for its aid to the Syrian people, collected in dioceses of the Russian Orthodox Church as well as by the Imperial Orthodox Palestine Society. Sombre ecumenical service for four children killed in Damascus attack
As Arabs and Christians gather to pray, the service is punctuated by sirens of ambulances carrying casualties of the daily mortar attacks.