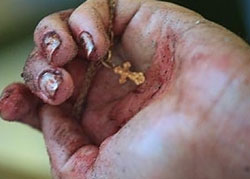 Islamists from "DAASH" ("The Islamic State of Iraq and Great Syria") have beheaded two Christians detained by them—Armenians from the village of Deir Hassan (al-Dana, Idlib). This has been reported by MCN with the reference to the Kurds, who fell into the hands of Islamists together with the Armenians, but managed to escape.

According to Ishtar TV, cited by the portal Persecution.org, ten Kurds who had been kidnapped by "DAASH" fled from their confinement and returned home to Afrin (Aleppo).

Rashid Arif, one of those who escaped, related that the Islamists brought two Armenians to the camp and held them captive for a week. After a week, they were taken out of the prison and nobody saw them alive since. Then one of the kidnappers brought a biscuit box to the rest of prisoners and suggested they eat its contents. When the prisoners opened the box, they found the head of one of the Armenians inside it.

Mass grave found in freed Christian village in Syria
After the operation that liberated the Christian village of Sadad from the Giish and Jabhat al-Nusra militants, local residents discovered two mass graves that contained about 30 bodies of men, women and children, killed at the hands of the extremists around October 26–28 this year.
×