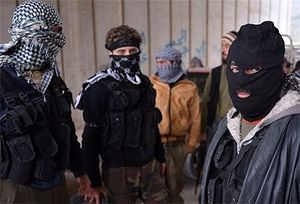 Leaders of five Christian denominations have called on the US government to change its policies and stop calling the militants “freedom fighters.” They are also urging Washington to put pressure on countries like Saudi Arabia, Qatar and Turkey to stop sending foreign militants into Syria, Islam Times reported.

The group comprises of Reverend Adeeb Awad, vice moderator of the National Evangelical Synod of Syria and Lebanon, Bishop Elias Toumeh, representative of the Greek Orthodox Patriarch of Antioch and All the East, and Bishop Armash Nalbandian, Primate of the Armenian Church of Damascus.

They are joined by Reverend Riad Jarjour, Presbyterian pastor from Homs, and Bishop Dionysius Jean Kawak, Metropolitan of the Syrian Orthodox Church.

It is the first delegation of its kind to visit Washington since the Syria crisis began three years ago, and its five members represent key different Christian communities in the country.

Stories by the five top leaders in the American Time magazine highlight the horrors that Christians are facing in Syria amid the worsening crimes of the militants in rebel-held areas.

The bishops’ accounts are similar to other stories of violence against Syrian Christians during the conflict which has claimed at least 130,000 lives over the past three years.

Syria is home to some 1.8 million Christians, who account for about 10 percent of the country’s population. The religious minority has been subjected to numerous attacks by extremist groups since the outbreak of violence in the country in March 2011.