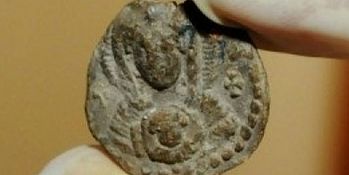 An unique seal with image of the Mother of God has been discovered during archaeological excavations near Burgas in Bulgaria, reports Sedmitza.ru with the reference to the Standar Bulgarian newspaper.

The image of the Holy Theotokos with Infant Christ is engraved on the round tin seal, with Orthodox crosses on both sides.

Archaeologists consider this find to be invaluable as only three similar seals have been discovered so far. Seven bronze coins, dated to the reign of Byzantine emperor Phocas (602-610), were discovered with it.

The find was made during the excavations on the Foros peninsula, on the site of an ancient fortress, which had appeared at the Late Antiquity period.