In these days approaching holy Pentecost, we read in the Acts of the Apostles about the Church’s prayer: These all continued with one accord in prayer and supplication, with the women, and Mary the mother of Jesus, and with his brethren (Acts 1:14). We see how the writer of Holy Scripture especially distinguishes here the Mother of the Lord, who was clearly surrounded by particular veneration from the apostles. The prayer of the Church at which the Holy Spirit descends is one that the Church prays along with the Most Holy Theotokos. 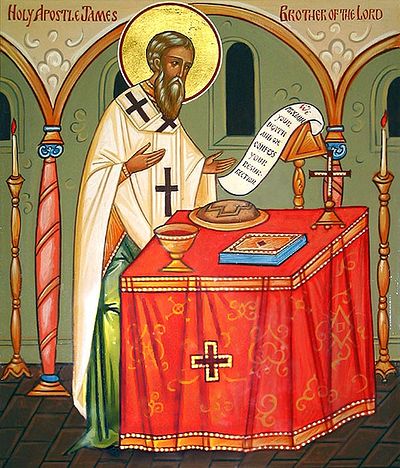 Holy Apostle James, the brother of the Lord.

But let us direct our attention also to Jesus’s “brethren” here. We know their names: James, Joses, Juda, and Simon (cf. Mk. 6:3).

First of all, what does the word “brethren” mean? In the Bible it can signify various degrees of relation: blood brother, half-brother, or cousin. Some Protestant Bible scholars consider that after giving birth to Jesus, Mary had children by Joseph, and it is these children who are mentioned here.

This supposition is tied more with the history of the Reformation than with Biblical text. In their time, the propagators of the Protestant Reformation sharply challenged the Catholics’ veneration of the Virgin Mary, supposing that She somehow eclipsed the Lord Jesus as the one and only mediator between God and man. Furthermore, they saw in the veneration of the Virgin (and not without reason) one of the spiritual pillars of monasticism—an institution that the Reformation also strove to do away with.

But if we turn to the Biblical text, we notice that Jesus’s brothers relate to Him rather high-mindedly—more resembling the relationship of an older brother to a younger, and not the other way around. And when his friends heard of it, they went out to lay hold on him: for they said, He is beside himself… There came then his brethren and his mother, and, standing without, sent unto him, calling him (Mk. 3:21, 31). We understand why His mother went with His brothers—out of love for her Son; but how can we explain the behavior of the brothers themselves? In patriarchal society, being the elder brother meant very much, and if the younger brother had behaved himself like that toward his older brother, it would have been extremely scandalous.

In the Gospel of John we see not only faithlessness on the brothers’ part, but a condescending view that would be inexplicable had they been younger, and quite understandable if they were older and saw in the Lord Jesus’s actions a violation of what they considered to be the necessary order: His brethren therefore said unto him, Depart hence, and go into Judaea, that thy disciples also may see the works that thou doest. For there is no man that doeth any thing in secret, and he himself seeketh to be known openly. If thou do these things, shew thyself to the world. For neither did his brethren believe in him (Jn. 7:3-5).

That is, the Scriptures more likely point to Jesus’s brothers as older relatives, who therefore could obviously not have been the children of Mary. The Church historian Eusebius of Caesarea presents the opinion that they were the children of St. Joseph from his first marriage. In fact, if Joseph was a pious widower, it would well explain also why after the story of the Lord’s childhood, Joseph is no longer mentioned in the Gospels; most likely he was considerably older than Mary and had died by that time.

However, we might well pay attention also to another fact—the amazing turnaround that occurs in the Lord’s brethren. At first we see unbelieving men, even disagreeable; and later these same men turn up in the Church as its heralds. In the Acts we see them praying with the entire Church, and the holy Apostle Paul in his first epistle to the Corinthians mentions them along with the Apostles (cf. 1 Cor. 9:5).

What could have brought on such a change?

Unbelieving people put forth various theories in order to at least somehow explain the disciples’ unshakeable faith in the Lord’s resurrection. All the skeptics in one way or another suppose that the disciples could not make peace with their Leader’s terrible death; and so, finally, they upheld the strange belief that He had resurrected.

These people’s hypothesis has many weak spots. One of them is that the Lord’s brothers did not believe in Him before His death and resurrection. This means that something happened to turn them from contemptuous skeptics into fiery preachers of the Gospels. That could only be one thing: the Lord Jesus, their Relative, rose from the dead. The Veneration of the Virgin Mary in the Orthodox Church
Archbishop Dmitri (Royster)
The Incarnation of God was foretold in the Old Testament. A race was chosen for a specific purpose: to produce a holy humanity from which God could take flesh. Mary is the one who, in the Lord's words, "heard the word of God and kept it." (Luke 11:28) Through her personal sinlessness she fulfilled all the hopes and prophecies of Israel. She figured greatly in the very prophecies, the most important of which is that of Isaiah: "Behold, a virgin shall conceive, and bear a son, and shall call his name Emmanuel." Getting to Know the Virgin Mary

Getting to Know the Virgin Mary
During my conversion to Eastern Orthodox Christianity, I had myriad experiences that sat in stark contrast to the nondenominational, Protestant faith I had carried since childhood. One of the most challenging things to grasp was the apparent prominence of the Virgin Mary in the Church. On The Theotokos & Ever Virgin Mary
Archbishop Dmitri (Royster)

On The Theotokos & Ever Virgin Mary
Archbishop Dmitri (Royster)
Because of recent discussions about the Catholic Church’s considering defining a new dogma concerning the Virgin Mary it might be of interest to Christians of other Churches to have some explanation of the Orthodox Church’s position concerning her.
Comments

Revd Dr Thomas Renz7/2/2019 2:28 pm
It is untrue that the view that James, Joses, Juda and Simon were children of Mary and Joseph "is tied more with the history of the Reformation than with Biblical text." It had been held long before that (it is after all named the Helvedian view after a fourth century theologian) and because, e.g., Martin Luther and John Calvin, the two most famous Reformation theologians, both rejected it.

The claim that "brethren" can refer to various degrees of relation is problematic. It is true that the Hebrew word could refer to cousins but this is not attested for the Greek word used in the Gospel. Greek has a perfectly serviceable word for "cousin".