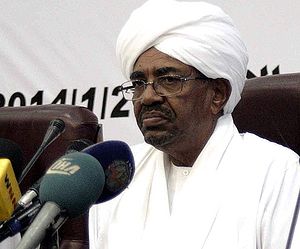 Sudan President Omar Al-Bashir. PHOTO | FILE
Sudan has prohibited the construction of any new church in the country which has been under an Islamic regime since 1989.

The Sudanese Minister of Guidance and Religious Endowments Shalil Abdullah announced that the government will henceforth not issue permits for the building of churches in the country.

Minister Shalil Abdullah told the press on Saturday that the existing churches are enough for the Christians population remaining in Sudan after the secession of South Sudan in 2011.

He pointed out that South Sudan is now an independent country with a majority of its people being Christians, and that the number of Christians still in Sudan is small.

The ban elicited immediate criticism from Sudanese Christian leaders. Secretary-General of Sudan Council of Churches Reverend Kori El Ramli told radio Tamazuj that the statement made by the minister contradicts the country’s constitution.

“Yes, we are a minority, but we have freedom of worship and belief just like the rest of the Sudanese as long as we are Sudanese nationals like them,” he explained.

The bishop also criticized the recent demolition of a church near a suburb located in Khartoum North by local authorities.

Kuwa Shamal Kuku, the bishop of the demolished church, expressed his discontent saying the demolition was carried out under the pretext of protecting the land.

Sudan sentenced to death a Christian woman last May after she refused to renounce her faith.

She was freed by the Sudanese appeal court, but she is still staying in the American embassy in Khartoum after being prevented from leaving the country last month.

The verdict of the Sudanese court sparked international criticism on religious freedom in the country. Children of South Sudan Baptized into Orthodoxy: a silent statement
South Sudan is the newest independent state in the world, formed in July 2011. The majority of its citizens are Christian, while the Orthodox population is estimated to be a few thousand. Relief for Sudan Christian family as they seek refuge in US embassy
The husband of a Sudanese Christian woman facing threats after her apostasy death sentence was overturned expressed relief on Friday that the family has been given refuge at the US embassy.