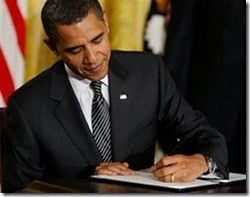 Religious groups will not receive an exemption from an executive order signed this morning by President Barack Obama banning “discrimination” based on sexual orientation or “gender identity” by federal contractors.

The order adds sexual orientation and gender identity to the list of specially protected categories that apply to federal contractors, and it adds gender identity to sexual orientation as a protected category for federal employees. The order could institutionalize federal discrimination against all religious groups and persons affirming natural marriage, traditional sexual ethics and the biological reality of gender.

Officials from World Relief, World Vision, World Concern, Food for the Hungry and Samaritan’s Purse are signatories, along with numerous Christian Colleges and Universities. Several denominational leaders also signed, including officials from the Assemblies of God, the Seventh-Day Adventists, Wesleyan Church, Presbyterian Church in America, Church of the Nazarene, Christian & Missionary Alliance and others.

Kudos to those religious leaders who defend liberty of conscience and dignity for all persons against an increasingly intolerant state and secular culture that seek to eradicate traditional faith and practice from public life.

Religious groups adhering to transcendent truths beyond the present age now have the special role to argue for freedom for ALL persons and to oppose the growing intolerance for any dissent from the reigning zeitgeist. Freedom of speech, conscience and religion are precious gifts essential to justice and democracy. California Student Speaks Openly About His Christian Faith in Graduation Speech Defying School's Order
California's Brawley Union High School denied a Christian student's speech three times because he wanted to express his Christian faith, but the student decided to assert his freedom of expression by openly speaking about his belief at the graduation ceremony.