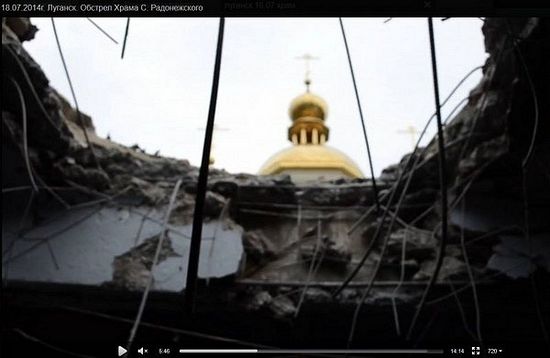 This was stated by the Facebook group “Chronicle of the Lugansk Diocese.”

By the grace of God, no one inside the church at was injured during the attack. The exploded shell damaged only the church’s roof.

“All of the faithful convey a profound prostration to the authorities for such attention. May the Lord, through the intercession of His great saint, grant health, salvation and everything that we earn according to our deeds!” it was stated. Mortar fallen near a church in the Lugansk region did not explode
“Fighting around the town of Alexandrovsk has continued for several days,” reports the website of the Ascension Cathedral in the Alexandrovsk Deanery of the Lugansk Diocese: Ukrainian artillery shells convent in Lugansk
On July 4, 2014, a little past 3 AM the Ukrainian army, coming very close to Lugansk, fired artillery against the regional clinical oncological dispensary of Lugansk, where the St. Olga’s Convent is located. Tonsure performed at the Lugansk convent during artillery shelling
By the mercy of God, after the tonsure ceremony was over, the cannonade calmed down and did not disturb the silence in the city for the rest of the day and for the following night.

His Holiness Patriarch Kirill: There can be no winner in civil war
His Holiness Patriarch Kirill
The results of this bloody conflict are horrifying. Not just a hundred, as in Kiev last winter, but many hundreds of the dead, with thousands injured and left homeless. Only the devil could celebrate such a victory, when brothers attack each other, destroying each other, inflicting mutual injury, and weakening the life forces of a nation.
Comments
×