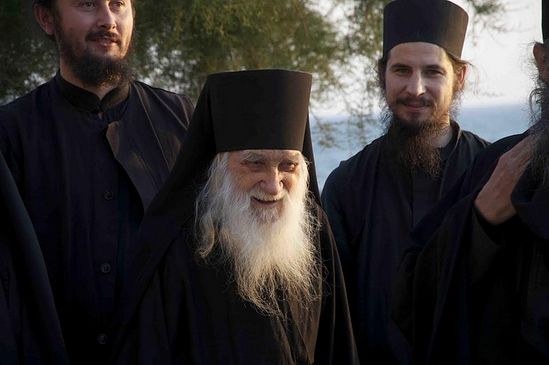 The aim of the visit of the father-abbot is to honor the ancient Holy Dormition Church that has celebrated its 998th anniversary, to see the brothers living in the skete, to communicate with the head of the skete, and to observe how work on the monastery’s restoration and preparation for celebration of its millennium anniversary are being carried out.

During his visit to the skete, Fr. Jeremiah venerated the most ancient Russian altar on Mt. Athos (near which, according to tradition, Venerable Anthony of the Kiev Caves, founder of the Russian monasticism, became a monk) and also examined the brothers’ labors and the objects under restoration.

By his visit, the 99-year-old elder has supported and encouraged the skete brethren. Leaving the ancient Russian Lavra of Holy Theotokos, father-abbot blessed the brethren and all those laboring for restoration of this holy site, wished them courage of spirit to inspire them for prayer and physical labors alike.

Fr. Jeremiah also visited the Stary Rusik Skete (the second oldest Russian skete on Mt. Athos) and several other Russian cells that are currently being restored. 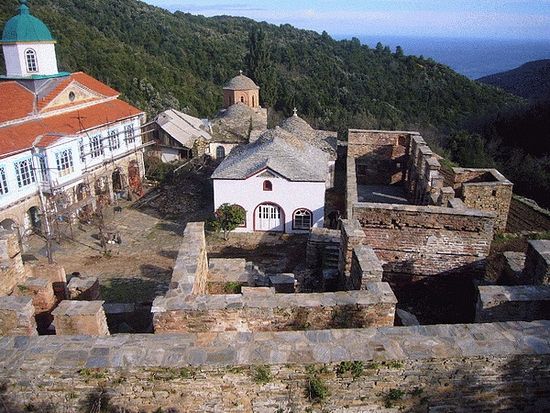 As is generally known, in 2016 the Xylourgou Monastery will be celebrating the 1000th anniversary of its documented history. The Athonite document on which appeared the first signature of a Russian Abbot on Mt. Athos, Hieromonk Gerasimos, dates back to 1016. However, the real history of this monastery is definitely older than that date. In the judgment of some researchers, there is a historical probability that the Russian Monastery of the Mother of God on Mt. Athos was founded in 989, following the sending of envoys to Constantinople by Holy Prince Vladimir, Equal-to-the-Apostles. 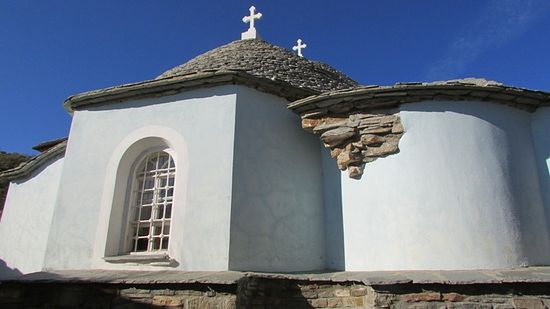 The Xylourgou Monastery is the cradle of Russian monasticism; it was founded when St. Athanasios the Athonite (†1000), who strove to make Holy Mount Athos the all-Orthodox monastic center, was still alive. It was on his initiative that the monasteries were established here, where lived representatives of almost all nations that were a part of the Byzantine Empire or were in union with it. 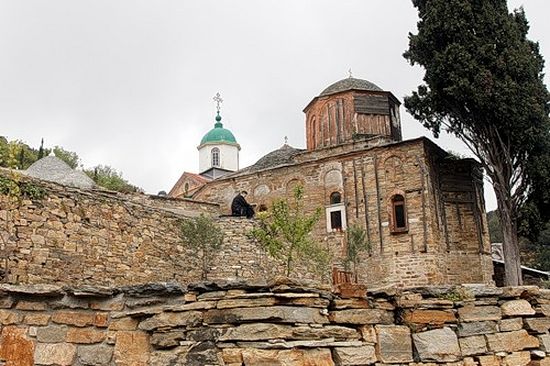 In ancient times the Russian monastery on Mt. Athos had the status of a royal monastery and was called a Lavra, ranking the fifth (until the beginning of the 19th century) in the diptych of the Athonite monasteries. In the 19th century (in fact, in the 18th century!) as a result of the reforms of Peter I “the Great” and the numerous Russo-Turkish wars, Russian monasticism on Mt. Athos was interrupted for the second time in history (the first time was during the Mongolian invasion). At that time, Xylourgou was already a skete of the St. Panteleimon’s “Upland” Monastery (at that time there was no “Coastal” Monastery of St. Panteleimon, which stands there today). By the decision of the Holy Kinotita (governing body) of Mt. Athos, the Russian monastery then was abolished from the diptych of the Athonite monasteries, but the Ecumenical Patriarch Callinicus did not affirm this decision and ordered that the monastery be restored to the Russian people, who were helping the Greeks free themselves from the Turkish yoke and thus were temporarily unable to enlarge their monastery’s community by new monks.