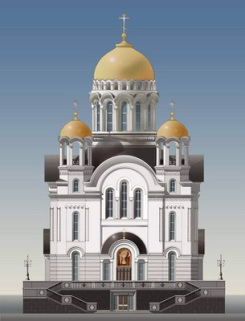 With the blessing of His Holiness Patriarch Kirill of Moscow and All Russia the Committee of the Orthodox Christian Church of Cambodia (the Patriarchate of Moscow) has signed a contract for the construction of the Church of Holy Greatmartyr and Healer Panteleimon in the town of Sihanoukville (Kampong Saon) in Cambodia, reports Patriarchia.ru.

The “Sam Sarath” building company has been chosen as the contractor. The overall estimate of costs is 301,663 US Dollars. The total duration of the construction will be 60 weeks.

The St. Panteleimon’s Church in Sihanoukville will be the first of three churches whose construction is planned in the Kingdom of Cambodia. The total area of the church will be 144 square meters (c. 1550 square feet), with a height of over 21 meters (over 69 feet), reports the website of the Orthodox Church in Thailand.

Early in 2011, the Moscow Patriarchate’s Secretariat for Foreign Institutions started receiving requests from the Orthodox faithful in Sihanoukville for establishment of an Orthodox church in the town.

On September 15, 2012, a general meeting of Sihanoukville (Orthodox) faithful was held and it was decided to address their request to the Hierarchy of the Russian Orthodox Church for obtaining admission of the parish into the jurisdiction of the Moscow Patriarchate.

By the decision of the Holy Synod of October 4, 2012 (Minutes No. 102), the parish was accepted into the jurisdiction of the Moscow Patriarchate and included in the pastoral care of the Representation of the Russian Orthodox Church in Thailand. More information in Russian on the Sihanoukville church can be found on its website, Orthodox Sihanoukville. Two Russian orthodox churches to be built in Cambodia
Pastoral care to the Orthodox believers in Cambodia is provided by the Russian Church's representation in Thailand. It was registered by the local authorities in July 2013. Russian church consecrated in Thailand, yet one more to be built
Head of Moscow Patriarchate Secretariat for Foreign Institutions Archbishop Mark of Yegoryevsk has laid a foundation stone for a church in honor of the holy royal martyrs in the city of Hua Hin, Thailand.

THOMAS JAMES GERARD MORAN2/17/2018 10:45 am
[NEED ADVICE] I IN-HERNIATE A CHARITABLE TRUST FUND ON MY 50 BIRTHDAY CONTAINING LANDS AND CHURCH CHARITY, [IRISH SWEEPS CHARITY] ECT I AM NOW 55 AND LIVE IN CAMBODIA FOR THE LAST 7 YEARS I WAS ONLY A CHILD WHEN I SIGHED PAPERS WITH THE TRUSTEES AND WAS TOLD NOTHING OF THIS TILL MY 50 BIRTHDAY, SINCE THAT TIME I HAVE HAD CRIMINALS USING TARGET COMPUTERS AND THE PHONE NETWORK TO COMPLETE DESTROYED MY LIFE WITH THE COMPLICITY OF THE STATE AND BOTH UK/CANADA/AND RUSSIAN STATING THEY WERE ME TO ASSESS MY ACCOUNTS WITH LARGE CHARITABLE DONATIONS HERE BUILDING HOTELS, I KNOW THE MONEYS SHOULD BE CONTROLLED BY IRISH AND ISRAEL TRUSTEES AND MONEYS HELD IN BONDS AND UNIT TRUSTS,COPTIC IS A TRUSTEE,
×