The Russia They Lost

Pravoslavie.ru author and veteran journalist Dimitry Sokolov-Mitrich cries out to a once loved and admired America. 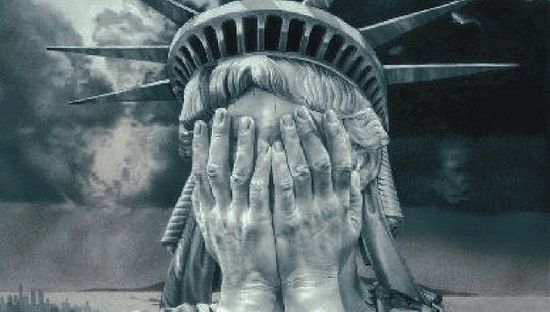 We had, after all, loved America. I clearly remember that we loved America. When we were growing up in the early 1990’s, the majority of my friends had no doubt as to how we related to western civilization. And we related well, how else?

Unlike our granddads and even our fathers, we saw “the great geo-political catastrophe of the twentieth century” as not a catastrophe at all. For us it was the beginning of a great, new direction. Finally, we are bursting out of our Soviet cocoon in to that big, cool and real world. Finally, we are able to satisfy our sensual hunger. We were born, we thought, perhaps not in the right place but, absolutely at the right time. Today it is hard to believe, but even the Church, having been freed from communist oversight and control, was now perceived on the same semantic level as the triumph of western values in general. The celebration of the 1000th year anniversary of the Baptism of Russia and the first concert of the “Scorpions” singing “Winds of Change” were equal in nature.

The wars in Iraq and even in Yugoslavia somehow passed by unnoticed. And it wasn’t just because we were too young and carefree. I, for example, was already an apprentice at the “Komsomol” paper in the foreign news department. I was watching the English language newswire full of references to Izetbegovich, Mladich, Karadjich, but for some reason didn’t see that as being significant. That was happening somewhere else, far away from our region. And, of course, the Balkan War, for me, did not represent some kind of anti-western logic. What did this have to do with America?

In the 1990’s we voted for the “Yabloko” Party, demonstrated at the parliament building for democracy, watched the newly formed television station NTV and listened to radio station “The Echo of Moscow”. In our first journalistic writings we would use most any reason to refer to a certain “civilized world” and believed deeply that it was in fact civilized. By the mid 1990’s in our ranks we began to notice the first “euro-skeptics”, but they were perceived on the level of the infamous absent-minded professor Jacques Paganel. I spent an entire year living in a student dormitory with Peter the communist, and Arseniy the monarchist. My friends from other dorm rooms would let me leave at night with these words of empathy: “Go ahead, go back to your nuthouse.”

The first serious blow dealt to our pro-western orientation was Kosovo. It was a shock. Our rose-colored glasses were gone. The bombing raids on Belgrad became for my generation the same thing as the attack on the Twin Towers was for Americans. Our consciousness took a 180 degree turn; along with the airplane carrying the, then, premier Eugene Primakov flying from Ireland to the USA over the Atlantic Ocean, and who, when hearing about America’s aggressive action, gave the command to turn the plane around and return to Russia.

At that time there wasn’t really any kind of anti-western propaganda in our media. Our own NTV explained to us on a daily basis that though dropping bombs on a major European city was…well, excessive, but after all, Milosovich was repulsive beyond anything the world had seen, so we just have to grin and bear it. The satirical cartoon program “Dolls” presented it as a common disagreement in one of our communal housing units where a drunken neighbor is torturing “Citizen Kosovo” and no one can do much about it except her boyfriend—with a powerful torso and the face of Bill Clinton. We took it in, but, already, didn’t believe it. It wasn’t funny anymore. By that time we understood that the Yugoslavia conflict was a precursor to what could happen to us in the future.

The second Iraq conflict, Afghanistan, the final separation of Kosovo, the “Arab Spring”, Libya, Syria, though somewhat surprising events, did not shock us. All our illusions were gone: we more or less knew with whom we are sharing our planet. But despite all of that, the entire time we still maintained our Western orientation. The myth of an evil America, but a benevolent Europe continued. The Kosovo fears gradually lost their edge and our compromise position looked this way: yes, of course, we can’t stand shoulder to shoulder with these players, but we can play the big game. After all, whom else can we compete with?

Even the parade of several multi-colored revolutions appeared as somewhat minor delinquencies. But then came Euro-Maidan and the subsequent brutal civil war: demonstrating with absolute clarity that absent all procedures and rules, with the “democratic process” lightly sprinkled on the enemy’s territory, we are now up against something more than mere geopolitical toys, but, rather, very real weapons of mass destruction. And it’s the only type of weapon that can be applied against a country that possesses a nuclear shield. It’s all very simple: when you press a button and send a rocket overseas, in response you’ll get back the same massive rocket. But when you deploy a chain reaction of chaos in to the territory of your enemy, you don’t have to prove or justify anything. Aggression? What aggression? This is a natural democratic process! A people’s age-old aspiration to be free!

This shock is much deeper than Kosovo. For me and the many thousands of “thirty - somethings” who came into the world with the American Dream on the brain, the myth of a “civilized world” is gone forever. My ears ring from this horror. The civilized world no longer exists. This is not just a moment of melancholy or sour grapes, but a time of serious danger. Humanity having lost its moral values is becoming a brood of predators and the possibility of a large war is just a matter of time.

Twenty years ago we were not defeated, we were subdued. We did not lose in a war; we lost in a cultural sense. We simply wanted to be like THEM. Rock and roll contributed more towards that end than nuclear warheads. Hollywood turned out to be more powerful than any threats or ultimatums. The racket of Harley Davidsons during the Cold War was more effective than the roar of fighter aircraft or bombers.

America, how stupid you are. Had you waited twenty years we would have been forever yours. Twenty years of vegetarianism and our politicians would have given up our nuclear weapons in the form of a gift and shook your hand long and hard in gratitude for accepting it. What a blessing it is that you turned out to be so stupid, America!

You have no idea who we are! These are, by the way, words that we were yelling at the Kremlin just two years ago. Since then and because of you, America, there are a lot less of us demonstrating in the public square. You say foolish things about us; think foolish things about us and as a result you continue making one mistake after another. There was a time when you were the coolest country, America. After the First World War you morally rose above Europe and became even stronger after the Second. Sure, you had Hiroshima, Vietnam, Ku Klux Klan and a full closet of skeletons, as would any empire. But all in all, all of that stuff didn’t make up a critical mass, which could turn a wine into vinegar. You showed the entire world how one should live with purpose: constructively with creativity and freedom. You created many miracles developing the world in countries like West Germany, Japan, South Korea, and Singapore. But since then you’ve changed. For some reason you stopped writing the songs that the whole world was singing. You have squandered your main capital investment—morality, which has a very bad inherent quality—it is not easily restored.

You are slowly beginning to die, America. And if you think I’m just gloating, you’re wrong. Major changes of any era are accompanied by large amounts of blood and I don’t like blood. We, who have ourselves gone through a loss of an empire, could try to explain what it is you are doing wrong. But we won’t. You figure it out. American Laïcité, Or, Religion As Tobacco

American Laïcité, Or, Religion As Tobacco
Erin Manning on how America is losing its former idea of religion in public life — as a positive good, though one that must live within certain boundaries — and becoming more like the French, with their policy of la&#239;cit&#233;, which sees religion as a threat that should be walled off from public life.

Men in Black
Dimitry Sokolov-Mitrich
The “Chaotic Pendulum” is a very funny thing. When you throw it off balance it flounders comically in space like a mad geometrical cripple, or a supremacist construction. It’s an enchanting sight, like the gaze of a boa constrictor.
Comments

Ben Marston9/27/2014 6:06 am
The American Constitution had within it the seeds of Americaґs demise, for it failed to 'Kiss the Sonґ as the Psalmist commanded in the second Psalm. 'Kiss the Son lest He be angry with you in the way and you perish when His anger is kindled but a littleґ. The Constitution, following the Protestant aversion for the Church, left undefined the spiritual heart of America, and so allowed the forces of Antichrist to take the heart of a people of whom de'Tocqueville had said, whose nation had the heart of a church.
Lord have mercy on me a sinner. Maranatha.

Steve M9/19/2014 4:27 am
Well said, Dimitry. There are many here in the USA whose eyes are open, yet somehow we are powerless against the Satanic onslaught being directed against us. We slaughter the unborn so women can choose meaningless jobs in cubicles, where being coddled and pampered is the name of the game. Where many folks live their lives without ever becoming responsible adults. Where a high percentage of people take pills because they cannot cope with the easy life. Where an evil elite have forced the government into every nook and cranny of our lives in their search for more money to subsidize sloth.

In the midst of this horror, I cling to my faith in Jesus Christ no matter how futile it may seem. I also pray for the evil to be held at bay, and I hope it does some good.

Seraphim Robert9/18/2014 10:54 pm
My God, my god, Thou hast forsaken an evil empire! May He save us His servants out of it as Antichrist comes ever nearer.
×