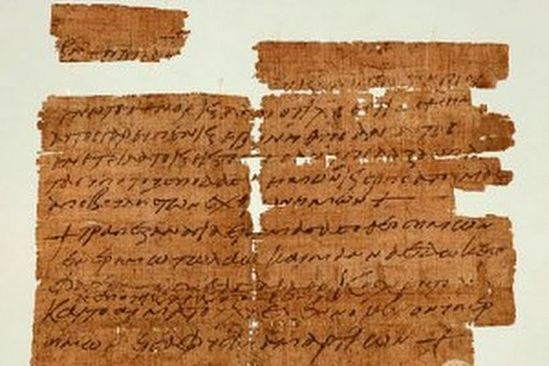 Staff members of the John Rylands Library of the University of Manchester have announced the discover of a Greek papyrus text written in the 6th century, which gives an account of the Last Supper and first Christians, reports Calam1 news portal with the reference to the Aleteia Catholic agency.

At a press conference held on Thursday, September 4, the prominent historian and textual critic Dr. Roberta Mazza (a research fellow of the recently founded John Rylands Research Institute) reported her latest discovery. While working at the John Rylands Library, containing thousands of unpublished early Christian manuscripts, the researcher discovered a scrap of papyrus on which she managed to make out the words “manna” and “Gospel bread”. The document, received into the library’s stock in as early as 1901, dates back to the 6th century.

The researcher also discerned the text of a prayer, engraved on the ancient papyrus, which is a compilation of the Gospel text that describes the Last Supper and fragments of several psalms: “Fear you all who rule over the earth. Know you nations and peoples that Christ is our God. For He spoke and they came to being, He commanded and they were created; He put everything under our feet and delivered us from the wish of our enemies. Our God prepared a sacred table in the desert for the people and gave manna of the new covenant to eat, the Lord’s immortal Body and the Blood of Christ poured for us in remission of sins.”

Dr Mazza has also disclosed details of the analysis of the discovered manuscript to the audience. “The spectral and other methods of the papyrus exploration enabled us to define it as a palimpsest (a manuscript or piece of writing material on which the original writing has been effaced to make room for later writing but of which traces remain). On the back of the text there is a scraped receipt for a payment of the grain tax in the Egyptian city of el-Ashmunein,” relates Dr. Mazza. “The author may have been Egyptian and knew both the Greek language and the Gospel’s text pretty well; however, numerous minor errors and inversions enable us to suppose that he did not copy ones of its “canonical”, established versions, but either compiled it himself or reproduced it roughly, from memory.”

In the historian’s view, this find throws light on the early history of Christianity; and, in particular, the Christian mission.

Christian missionaries struggled against the legacy of ancient religions, replacing idols of the past by the Holy Scripture’s text and prayers, methodically eradicating the essence of pagan beliefs and leaving only faint echoes of their outward forms. Moreover, the find proves that the Bible for common people at that time was not just another book, “collecting dust on the shelf”, but it was alive. The simple folk spoke about it and narrated it to each other,” concluded Mazza.