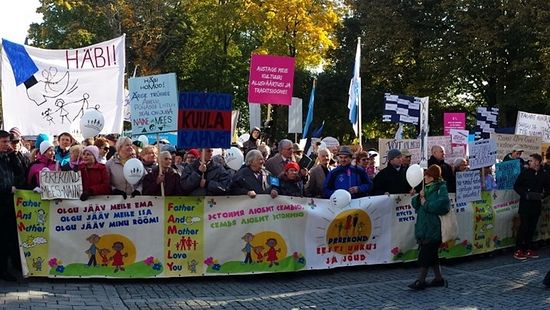 A large rally in defense of family values and against passage of the civil partnership law (which will recognize same-sex unions) took place in Tallinn on Sunday near the house of parliament, reports RIA-Novosti.

The partnership act that enables a legal registration of same-sex unions, among other unions, was adopted at the first reading of the parliament. The second and third readings are scheduled for October 7 and 9. The Estonian government has already approved the bill. 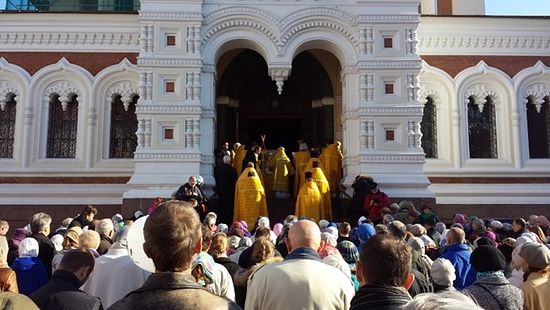 Before the rally, the Estonian Orthodox Church of the Moscow Patriarchate held a supplicatory prayer service in defense of the family values in front of the main entrance of the St. Alexander Nevsky Cathedral in Tallinn, situated several meters away from the house of parliament. The prayer service was headed by Metropolitan Cornelius of Tallinn and All Estonia.

The protest action, which lasted more than two hours, was organized by the foundation, “In Defense of Family and Traditions”. According to head of the foundation Varro Vooglaid, the rally is meant to show the parliament deputies that the people are opposing the partnership law enactment and attempts to change the essence of such concepts as marriage and family.

The people of all ages who came to the rally were holding the following banners in their hands: “Passing of the partnership law is death to democracy”, “Parliament! listen to the people”, “Marriage is the union between a man and a woman”, “Each child must have a mother and a father”, “Lord, help Estonia” and others. The rally participants denounced the actions of the Estonian authorities who did not wish to consider the opinion held by majority of Estonian citizens.

Last Friday, the leading Estonian research company TNS Emor published the poll results concerning the attitude of the country’s citizens towards the official recognition of same-sex “families” by the state. 1000 people aged between 15 and 75 took part in the survey, conducted at the request of the “In Defense of Family and Traditions” foundation September 16-29. According to the sociologists’ data, 67% of the Estonian residents do not support the recognition of homosexual “marriages” by the state. Estonian same-sex partnership stalled after family campaigners presented 38,000 signatures
The founder of Estonia’s pro-family movement said in an interview with a Polish Catholic television program that the country’s draft law on same-sex marriage will not go forward after his group presented the government with nearly 40,000 signatures defending traditional marriage.

Clergy of Lutheran Church in Estonia demand that Pastors are forbidden to be Masons
Thirty clerics of the Estonian Evangelical Lutheran Church have addressed the Church administration with the request "to forbid priests to enter the organization of masons because "it does not correspond to their holy calling" and "causes a lot of misunderstanding among both clergy and laity, and provokes rejection and prejudices in the Estonian society on the whole". Metropolitan Hilarion: We hope the Patriarchate of Constantinople and the Estonian State will make further steps to normalize situation of the Estonian Orthodox Church of the Moscow Patriarchate

Metropolitan Hilarion: We hope the Patriarchate of Constantinople and the Estonian State will make further steps to normalize situation of the Estonian Orthodox Church of the Moscow Patriarchate
Metropolitan Hilarion of Volokolamsk, the DECR chairman, answered questions of the journalists during press conference held at the Department for External Church Relations on November 25.
Comments
×