Churches of the city of Erbil, the capital of the Iraqi Kurdistan, today are becoming a temporary home for dozens of Christians, Muslims, and Yazides (also Yezidi: a part of Iraqi Kurds who confess their own syncretic religion, a mixture of Zoroastrianism and ancient Mesopotamian religions), fled from the terror of the “Islamic State of Iraq and the Levant” extremists, reports the Copts Today news portal. 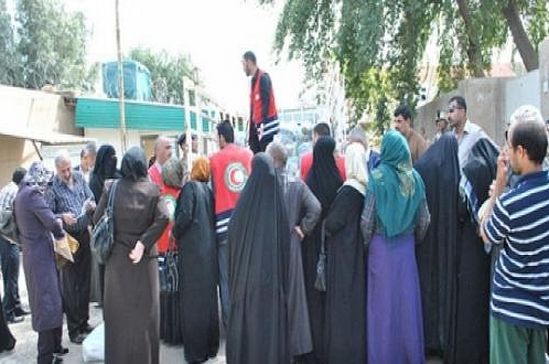 Nadia Henry, a former Iraqi MP who several days ago visited Kurdistan with a humanitarian convoy, related the present situation in the city to the Veto journalists: “There are very many refugees. Thousands of people entered Erbil alone. The number of these destitute people requires a great amount of humanitarian aid and there is constantly lack of it”. N. Henry has sharply denounced “the hushing up by the world community of the tragedy in Nineveh,” referring to this fact as to “a mockery” and “a crime”.

According to the politician, the overwhelming majority of refugees put the blame for banishment of religious minorities from their own homes on the republic’s leaders. “One of them said to me: “The Iraqi authorities have sold us, the Christians and Yazides, Iraqi Arab residents, to ISIS,” Nadia noted.

However, at the same time she especially noted the role of churches in support of settlers from the neighboring regions: “I saw myself how one of the Erbil churches became a true “cell of hope”, in fact organized like a beehive: each parish member is trying with all his or her strength to help the refugees who have found asylum in the church. And there are dozens and hundreds of such churches; local Christians are aiding everyone who has knocked on their door, without any questions about his or her denomination or ethnicity”.

Nadia Henry also points out that the Orthodox Church is striving to provide the refugees not only with shelter and food, but also with places for worship, and their children continue their studies at schools, functioning at churches. “The Light of Christ Will Also Shine Over Kurdistan…”
An interview with Seraphim Maamdi, an Orthodox Kurd

“The Light of Christ Will Also Shine Over Kurdistan…”
An interview with Seraphim Maamdi, an Orthodox Kurd
Deacon Giorgi Maximov
I was a Yazid. As all Yazidi, I went as a child with my relatives to the Orthodox church; we had icons at home, before which we placed candles on Sundays and feast days—that is, it was considered normal to worship the sun and go to church at the same time. But I was very drawn to Christ. When I heard about Him on television, or when someone would tell me about Him, I would always listen with great curiosity. In 2002, my family and I moved to Moscow. Here, someone gave me a copy of the New Testament. That is where it all began… Orthodoxy is in Our Blood
Hegumen Josaf (Peretiatko)
Igumen Josaf (Peretiatko), a monk of the Holy Trinity Monastery in Kiev, spent seven months in the military conflict region in Iraq. In January 2005 Father Josaf took part in the 13th International Project of Christmas Educational Readings in Moscow and courteously agreed to meet our correspondent.
Comments
×