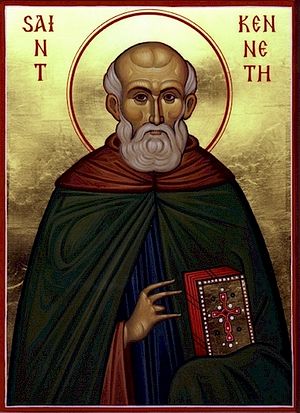 Icon of St. Kenneth of Aghaboe
St Kenneth (also known as Cainnech and Canice) is one of the greatest Irish ascetics and most venerated saints in Ireland after St. Patrick and St. Brigid. He was born in c. 515/516 (according to another version, c. 525) in the province of Ulster in the north of Ireland and was the son of a famous bard. Some researchers state that Glengiven in County Derry (Londonderry) may have been his birthplace. In his youth the future saint grazed flocks near his native home.

Soon St. Kenneth became a disciple of St. Finnian of Clonard and studied at his monastery. The school founded by St. Finnian trained over 3,000 prominent Irish ascetics. Such monastic centres as Clonard were at that time among the greatest centres of monasticism, theology and learning in the whole of Western Europe. Later Kenneth lived at Glasnevin Monastery near Dublin where he became friends with the great ascetics Sts. Ciaran and Comgal. When the plague broke out in Ireland the saint moved for a while to Wales where he stayed at Llancarvan Monastery under St. Cadoc. There he continued to learn and in c. 545 he was ordained priest.

From Wales Kenneth returned to his native Ireland, where, owing to his labours, new monasteries were soon established in the north and in the south. The most famous and important monastery founded by Kenneth was Aghaboe in County Laois (Leix), a possible date of foundation being 577. Its name means “the little field of a cow.” Under St. Kenneth, Aghaboe became the chief church and spiritual centre of the kingdom of Ossory. Here the holy abbot was noted as a scribe. Later, in the eight century, one of the monks of Aghaboe was a learned ascetic called Virgilius, who became Bishop of Salzburg in present-day Austria and founder of Salzburg Cathedral.

Today one Irish county (in the south-east, in the province of Leinster) is called Kilkenny after St. Kenneth and its main town bears the same name. It is most likely that St. Kenneth founded a church or a monastery in Kilkenny (“Kenneth’s Church” in Gaelic). Kilkenny was one of the last regions of Ireland to accept Christianity. Among other monasteries established by Kenneth in Ireland we can mention Drumahose in Derry and Cluain Bronig in Offaly. 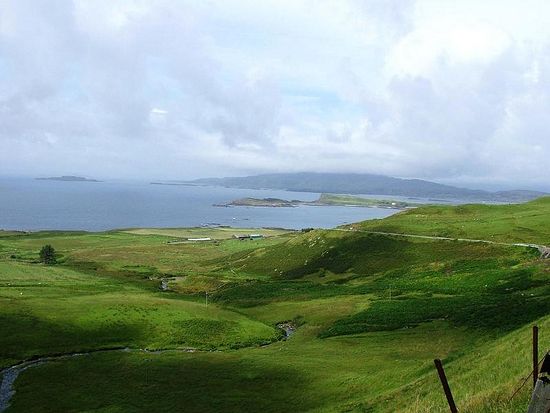 After 562 Kenneth moved to Scotland where he built his greatest monastery on Inchkenneth (“Kenneth’s Isle”) to the north of Iona in Argyl and Bute. He made this large monastery a missionary centre. Now only minor ruins remain on this site. St. Kenneth was a close friend of St. Columba of Iona, together with whom he travelled through the country, preaching and baptizing Picts. There is early evidence of communication at a distance between the two saintly men. Thus, once St. Columba and his companions miraculously escaped shipwreck through the prayers of St. Kenneth who then was far away from them. According to tradition, when Sts. Columba and Kenneth met the Pictish pagan king Brude and the latter began threatening them, St. Kenneth made him immovable by means of the sign of the cross. Soon Brude accepted baptism together with his subjects. 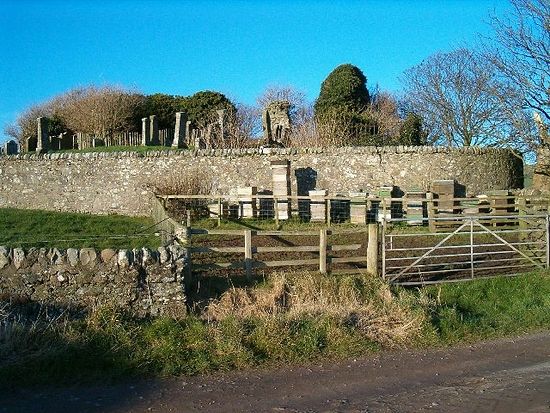 A ruinous church and Celtic 'beehive'-cells on Kintyre, Scotland

It was said that it was St. Kenneth who erected the first church in St. Andrews in Scotland. In memory of St. Kenneth’s close link with Iona (which he repeatedly visited) a church and a cemetery were named on this isle after him (the cemetery still exists). St. Kenneth was known on the Hebrides, on the island of Mull, in Fifeshire, on Kintyre peninsula and in many other places in Scotland where he founded churches or monastic communities and where among their ruins numerous testimonies to his labours can be seen to this day.

Sometimes his disciples established chapels and churches in these places in honour of him. Among the churches still bearing St. Kenneth’s name in Scotland there are Kilchennich on Tiree (the Inner Hebrides), Kilchainie on South Uist (the Outer Hebrides), and Cambuskenneth Abbey (now in a ruinous state) not far from Stirling. He may also have founded cells on Ibdon and Eninis (“the Birds’ Island”), a chapel called Lagan-Kenny on the bank of Loch Laggan (the chapel partly survives) and a monastery on the river Eden. Kenneth also may have lived as a recluse on the present-day small island of Texa near Islay where part of his hermitage still exists. However, the venerable man did not remain in Scotland till the end of his life but returned to his native Ireland, where for many years he preached, built monasteries and led an austere ascetic life. Dozens of Irish churches are to this day dedicated to this great wonderworker. 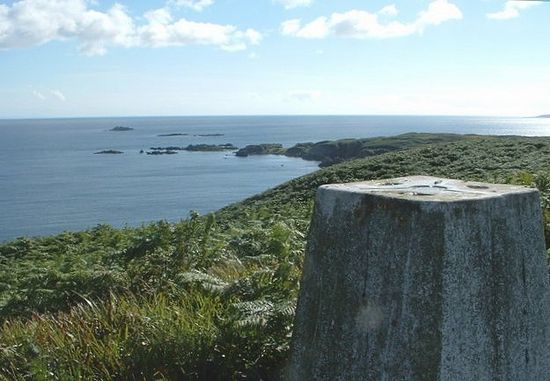 Like many other Celtic saints, during his life St. Kenneth more than once retreated for for long, quiet prayer in solitude. The saint particularly liked to live as a hermit on small islands. As was the case with most Irish saints, Kenneth loved to communicate with wild nature and animals. Thus, once he ordered mice to go away when they nibbled his shoes; on another occasion he rebuked birds for making a loud noise on a Sunday – and they instantly obeyed their master. There is also a touching story of how a deer solicitously held the saint’s personal copy of the Bible on its horns while he was reading it.

St. Kenneth became renowned for his sermons, which were full of inspiration and rated very highly by his contemporaries. Among other things, the saint was a well-known spiritual poet and theologian as well. These written works include commentaries on all four Gospels, known as the “Chain of St. Canice”. Kenneth reposed in 599 or 600 in extremely old age on the tiny island of Monaincha in County Tipperary, where he had established a community of hermits. Monaincha is no longer an island (as the lake where it was located was drained) and ruins of an ancient church can still be found there. St. Kenneth is venerated in Ireland, Scotland and Wales to this day. He is listed among the “Twelve Apostles of Ireland” and the name “Kenneth” remains a popular baptismal name. 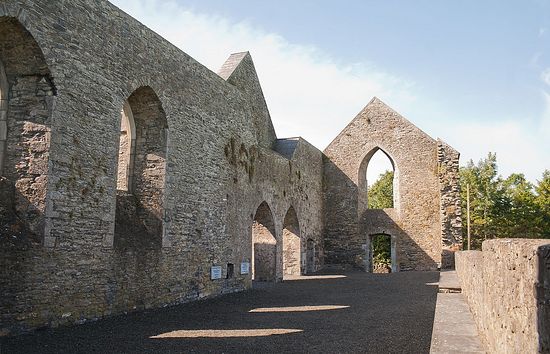 After St. Kenneth’s death, the monastery of Aghaboe developed more and more and sent missionaries to the continent. With time a diocese appeared in Aghaboe, although in the twelfth century it was transferred to Kilkenny. Unfortunately, in 1346 the town of Aghaboe burned to the ground—neither the church nor St. Kenneth’s relics survived. The monastery in Aghaboe was finally dissolved by Henry VIII in 1540. Today Aghaboe is a hamlet in County Laois where pilgrims still visit the ruins of the ancient monastery and an Anglican church (Church of Ireland) is dedicated to its patron, St. Canice (Kenneth). A Catholic church in the neighbouring village of Clough is dedicated to him as well. 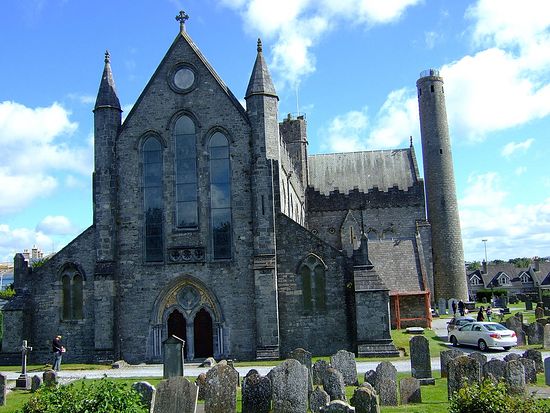 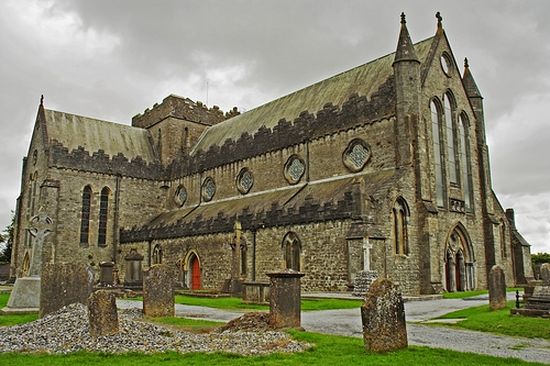 Two cathedrals in the city of Kilkenny, another important centre of veneration of St. Kenneth, are connected with this saint. Firstly, this is St. Canice’s Cathedral belonging to the Church of Ireland. It stands on the very site where the original church, either built by the saint himself or erected in his memory, used to stand. The Cathedral dates back to the thirtenth century: it is built in the early English Gothic style and is considered to be the second longest cathedral in the country. It is built in the shape of a cross; many medieval stained glass windows and monuments, including a statue of St. Kenneth, have survived; a unique ninth-century round Celtic tower (100 feet high), dedicated to the saint, stands near the Cathedral. 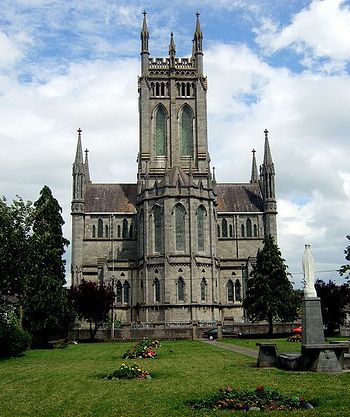 RC Cathedral of the Holy Virgin in Kilkenny, Ireland

There is also a Roman Catholic Cathedral in Kilkenny, known as “the Church of the Blessed Virgin” and “the Church of St. Canice”, which was built in the first half of the nineteenth century and has a statue of the saint. St. Kenneth is the patron-saint of Kilkenny. 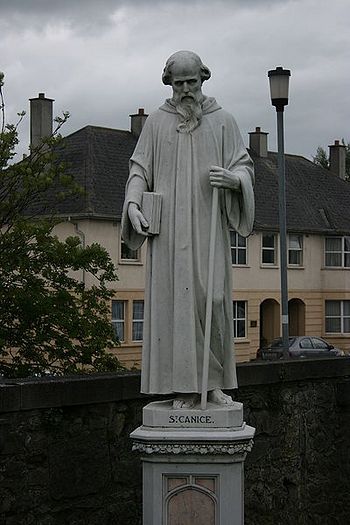 St. Kenneth is also closely associated with the town of Finglas in County Dublin. According to tradition, he founded a monastery here of which only a cross survives. A number of schools around Finglas are named after him. Churches dedicated to this saint can be found not only in Ireland and Scotland, but also in the USA, Australia and New Zealand.

Holy Father Kenneth, Wonder-Worker of Ireland and Scotland, pray to God for us! 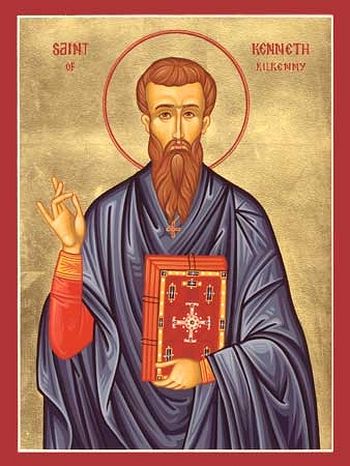 Saint Ciaran, Abbot of Clonmacnoise in Ireland
Commemorated September 9/22
Dmitry Lapa
Ciaran was educated by the prominent theologian St. Finnian of Clonard, the spiritual father of the “Twelve Apostles of Ireland”. Here he showed himself to be a most gifted student and one of the most zealous monks. Venerable Comgall, Abbot of Bangor in Ireland
Commemorated May 10/23

Venerable Comgall, Abbot of Bangor in Ireland
Commemorated May 10/23
Dmitry Lapa
St. Comgall is venerated as one of the greatest confessors, spiritual fathers and ascetics of his age. The biographer of St. Columban, Jonah of Bobbio, wrote the following of St. Comgall: "He was a great father of monks in Ireland, noted for his perseverance in teaching and strict discipline." St. Comgall was venerated all over Ireland.
Comments

Michael McGrath1/1/2021 8:09 pm
That statue of St. Canice is in the grounds of St. Canice's Catholic Church, Kilkenny city and not at St. Mary's cathedral, Kilkenny, as you state in the article.

Nina Lamson6/3/2017 4:52 pm
Having just returned from this region where we toured some of the sites of the Celtic saints, I truly appreciate how you captured the life of St. Kenneth. Thank you.
×