Thousands of citizens have taken to the streets of Germany and Denmark over the past couple of days to protest the 'Islamisation' of Europe, to oppose Sharia law, and to call for peace with Christian Russia, as the attendance of weekly street rallies snowballs over immigration concerns. 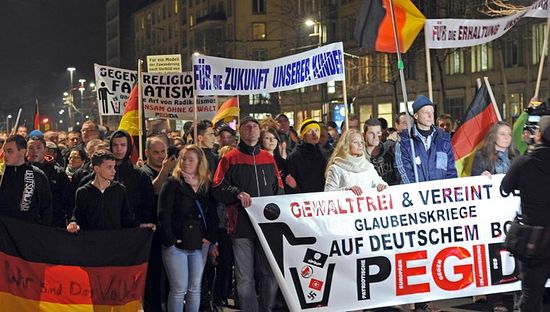 The industrial city of Dresden in former Eastern Germany has seen a protest organised by “Patriotic Europeans against the Islamisation of Europe” (PEGIDA) every Monday for nearly two months, with numbers marching growing from just a 'few hundred' in October to over 10,000 today. The German movement has been so successful it has spawned a number of similar marches in other cities, but they have been the focus of criticism and counter-demonstrations.

Yesterday's march in Dresden of 10,000 attracted 9,000 determined to prevent it from going ahead, as they have done in previous weeks. The counter-protesters complain PEGIDA has been infiltrated with Neo-Nazis, however the tone of the protests and slogans they march under have a distinctly anti-fascist tone, and at times appear to have been inspired by the protests against the former Communist Eastern Germany, reports theDaily Telegraph.

Marching under the rally slogan that did its part in bringing down the Berlin wall twenty five years ago, banners read “Wir sind das Volk”, or “We are the people”. Although the founder of the marches claims to be apolitical and is merely interested in preserving “Germany’s Judeo-Christian Western culture” and “zero tolerance for criminal immigrants”, some of the banners are more overtly political.

Reflecting Germany's unique experience of making war on Russia, banners reading “Peace With Russia! Never Again War in Europa!” were unfurled, reflecting a growing counter-current against the warmongering taking place on the fringes of Eastern Europe.

It is not only among the citizens taking to the street that this despair at the prospect of further conflict is being felt. Last week an open letter to the German Federal Government, Bundestag, and Media was published, calling for de-escalation and dialogue with Russia.

Signed by sixty politicians, academics, and celebrities including former German Chancellor Gerhard Schröder, former German President Roman Herzog, and astronaut Dr. Sigmund Jähn the letter read: “We, the undersigned, call on the federal government to undertake its responsibility for peace in Europe. We need a new policy of détente in Europe... The need for security of the Russians is as legitimate as the Germans, the Poles, the Baltics and the Ukrainians.

“We must also urge for a European Russia... Since the Congress of Vienna in 1814 Russia has been a recognised global player in Europe. All who have tried to change that have violently and bloodily failed – for instance the last megalomaniac Hitler, who in 1941, murderously set out to subjugate Russia”.

Separately on Sunday, anti-Islamist protesters met in Copenhagen, Denmark, to rally against the meeting of pan-Islamic extremist group Hizb ut-Tahrir, or ‘Proud of Sharia’, a movement that “openly” supports the establishment of a European caliphate and Sharia law.

Hizb ut-Tahrir have objected to the recent announcement by the Copenhagen government that they will work to reduce the number of people in the city supporting Sharia, calling it “an attack against Islam and Muslims.

“We in Hizb ut-Tahrir have a stated goal of protecting Islam and getting Muslims to adhere to their values. We have therefore repeatedly revealed Danish politicians’ attacks against Islam and Muslims, and this time is no exception”.

Local politician Lars Aslan Rasmusse led the counter protest, saying “For me, it is important to show that there is another Nørrebro, that cannot accept the things that Hizb ut-Tahrir stands for. But as long as they are a legal organisation, we politicians unfortunately cannot do anything”. While he addressed the crowds, it is reported he was shouted down by young Hizb ut-Tahrir members crying “Legalise Sharia”.