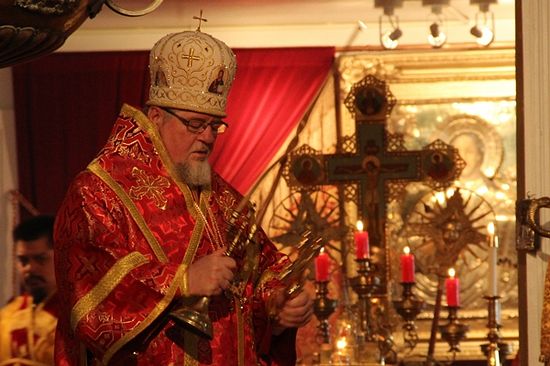 When David Mahaffey was installed as the Orthodox Bishop of Alaska in a ceremony in Sitka this past February, he became the 16th leader of America’s oldest Orthodox diocese.

Bishop David has now been on the job for nine months. He returned to Sitka this fall.

Under the Julian calendar, St. Michael’s Feast falls in late November. It was a natural time to return to Sitka, and to St. Michael’s Cathedral, where David Mahaffey became Bishop David of Alaska last spring.

But traveling is nothing unusual for this bishop. He leaves his Anchorage home almost every weekend to visit his far-flung flock.

“We go back to the words spoken by, many many years ago in the early church by St. Ignatius of Antioch,” he said. “‘Where the bishop is, there is the Church.’”

In Alaska, that can be uniquely difficult.

“There’s three challenges in Alaska: distance, distance and distance,” he said. “And did I mention, distance is a challenge.”

Bishop David served as administrator of the diocese for about year before being installed in his new role. He says that for the most part, his job is simply continuing what the church has always done.

“By and large, for me, anyway, the Diocese of Alaska is very much a very traditional, well-oiled Orthodox machine,” he said. “The bishop just has to take his hand on the tiller and keep it in the right direction.”

But he would like to see the Orthodox Church play a larger role in dealing with some of the big issues facing Alaska, including the state’s high rates of suicide, alcoholism and domestic violence.

“We have to be here for the needs of the people,” he said. “I can’t be saved without you, and you can’t be saved without me…that is an underlying principle of everything we do as Orthodox Christians. We understand that we need to bring our neighbor along with us if we are going to enter the Kingdom of Heaven. We can’t do it alone.”

The bishop said he thinks the Orthodox perspective has something to add to traditional clinical approaches when it comes to issues like addiction or depression.

“In Orthodoxy, we don’t look at people, we never like to use the word ‘individual,’” he said. “It isolates you, it makes you nobody but yourself.”

That sense of community is one piece of it. Another is a sense of purpose.

“The role of the Church is to show the person, God made you for a reason, and you might have to spend your whole life figuring out what that is,” he said. “Do you think that I, 20, 30 years ago, if someone would have said to me, you know someday you’re going to be the bishop in Alaska, I would have laughed at you. Because I’m from Pennsylvania, and I liked Pennsylvania just fine, but this is what I felt called to do…”

“And so my goal is always to find that person, and help direct them, to say to them, you have a purpose in life, and your job, if you will, is to find out what that is.”

As for Bishop David himself, he says that though his calling was unexpected, so far it suits him. As an east coaster transplanted to the last frontier, he’s surprised by how much time he spends on planes, and how little in cars; he’s learned never to schedule distant events back to back in case the weather intervenes. And he’s learning to recognize the different tunes used for hymns in Alaska’s distinct regions.

But, he says, at the end of the day, orthodoxy, is, well, orthodox, no matter where you go.

“Same liturgy,” he said. “Done in Russia, done in the Middle East…and of course, here in Alaska.” Orthodox Holy Synod elects new Alaska Bishop
The dates of Father David’s consecration to the episcopacy are Feb. 20 and 21at St. Innocent Cathedral in Anchorage. His installation will take place on Feb. 23, at St. Michael Cathedral in Sitka.

History Notes concerning Orthodox Christianity and the Alaska Church
Fr. Michael Oleska
Today, with Cathedrals at Sitka, Anchorage, Unalaska and Kodiak, and nearly 100 churches and chapels across the southern half of the state, with a seminary at Kodiak as well, the Orthodox Diocese of Alaska is the “mother church” for the millions of Orthodox Christians in Canada, Mexico and the United States.
Comments

I was asked by a Protestant minister why I have not become a Protestant. I told him because All Orthodox churches, regardless of cultural and ethnic jurisdictions profess and proclaimed the same Gospel Truths in Christ. Unlike Protestantism, where I could find a church to fulfill my social passions, behaviors and emotional desires whether right or wrong, no variances to the standard of Truth existed theologically in the teachings of those Orthodox Churches throughout this country or the world. Protestantism, on the other hand, could not make the same claim to its theological foundations regardless of its cultural, ethnic or nationalistic jurisdictions. Like the constant “Pi” in science, the constant of the same truth exists in the theology and teachings of every Orthodox Church regardless of its cultural, ethnic or nationalistic origin or ties.

As a retired pilot with over 41,000 hours spent in the air traveling worldwide, I understand the beauty of your comments in your need to travel over the vast distances of wilderness and wonder in the service to your flock.

May God Guard and Guide you while you fly those great spaces in the Sky in your pursuit to serve, protect and guide your flock toward the Most High!