Archbishop Mitrofan of Horlivka and Sloviansk, who did not leave his diocese even during the most tragic months of 2014, was asked by a reporter for the Pravoslavnaya Zhizn (Orthodox Life) website: “What should be the Church’s mission during times of civil strife? Nothing other than fostering reconciliation? Is it ethical to give material support to one of the parties (for example, the Supreme Court of the Ukraine)?” 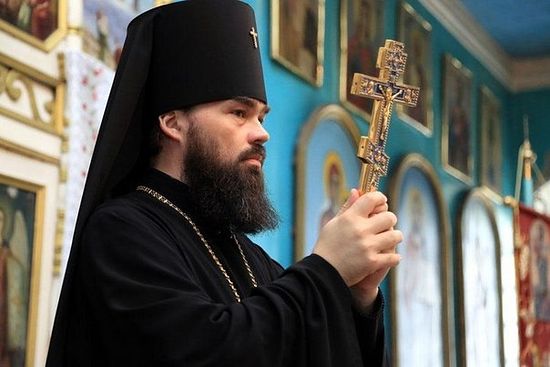 His Eminence answered, “Sooner or later, any war ends. And, however it may be, whatever may happen, we must realize that we will have to continue living on the same territory. Whether we will live either in the same country or as a neighboring country does not depend on the Church, because it was not the Church that started this war. But the Church can do something to make it so that hatred may not increase and animosity may not get stronger; so that people, after all, would regard each other as human beings, and not as animals to be killed. And this is another task of the Church: to witness that we are all human beings, not to sow enmity, not to promote revenge; to seek for the things that can unite us and not turn the knife in the wounds. This is the mission of the Church: to testify about God before people.”

“As for material support, it seems today that there are enough public organizations supporting armed forces. In my opinion, the Church should not be involved here. This is not because there are no spiritual children there who need support—that is not the point. The fact of the matter is that there is much prevarication in this war. There are many things in this war that, should the Church touch them, It will have to bear this burden. It is not the Church’s business to equip an army with arms,” noted the hierarch. “The Church can give aid and support to the wounded in hospitals and in the medical tents of the army, help the destitute and the needy with food and medicine. The Church can and should give spiritual guidance to the people who take up arms, to prevent them from using them wantonly, and that they might remember that they are Christians and have a conscience. That is all that the Church can do.

“I cannot fully understand it when the clergy or some hierarchs purchase bullet-proof vests, helmets, various weapons or automobiles and send them to the combat zone. I believe the Church should keep away from everything related to the war. If today the parishes situated in the so-called “anti-terrorist operation zone” start buying helmets and bullet-proof vests for the people’s volunteer corps, then the Church will be accused of supporting ‘terrorism’. Immediately. Nobody will hesitate for a moment. But we have two belligerents; our spiritual children are in both parties, there are Christians both here and there—members of the Ukrainian Orthodox Church. And if we purchase bullet-proof vests for this one, then we have to buy them for the other as well.” At least 11 killed, 40 injured in shelling in Donetsk, E. Ukraine, school hit
“The particular cynicism of this shelling is the very fact that today was the children’s first day at school. And on this day, artillery directly targets them. These are blatant, intolerable things,” the ministry’s human rights ombudsman Konstantin Dolgov said. Priest in Lugansk: “Nobody even thought of going away, of leaving the church and parishioners”

Priest in Lugansk: “Nobody even thought of going away, of leaving the church and parishioners”
Rector of the Church of the Icon of the Mother of God, “Of Tender Feeling” in Lugansk Archpriest Alexander Ponomarev has related how priests and parishioners went through the terrible months of war. Archbishop Mitrophan of Gorlovka and Slaviansk: Good is always stronger than evil

Archbishop Mitrophan of Gorlovka and Slaviansk: Good is always stronger than evil
We cannot ring the church bells. There is no electricity, no running water. We are serving using prosphora we baked earlier, and when they are all gone we will have to think about what to do next. But in our souls there is no depression, no anguish, only joy. What are we, crazy? No, we are simply Christians.
Comments
×