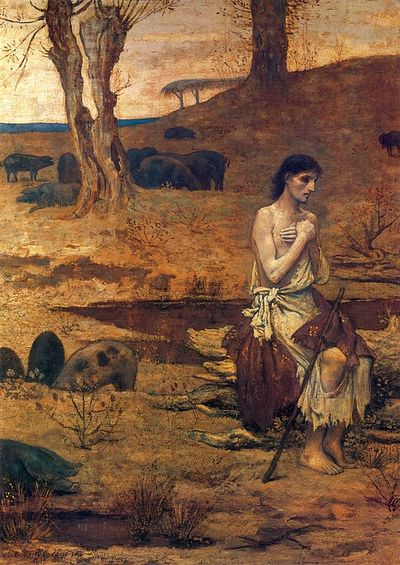 What an incredibly powerful story! In only a couple of weeks we come to Lent — that period of fasting and prayer that the Church puts before us; and the next few weeks are a preparation for it.

Last week, it presented us with the story of humility (only with humility can we come close to God). This week it presents us with repentance — we need repentance to come to God. Next week it will present us with judgement — the Gospel of the Second Coming of Christ.

Humility, repentance and then coming face to face with God. This is the journey that the Church takes us on before Lent. But today Jesus teaches us with symbols, People have got a problem with symbols in Christianity. "You Orthodox always use symbols." Jesus used symbols — that's why we Orthodox use symbols. Because Jesus used metaphors, and Jesus used parables, and Jesus used symbols, We follow Jesus in using symbols — and those who accuse us of being too symbolic — let them read the scriptures and know what they're talking about.

And the younger of the two sons goes to the father, "Give me my inheritance." Now I don't know about you but if my son came to me, while I was still alive and asked for my inheritance, I'd be very upset.

You'd think "wouldn't it be nice if you just waited till I died, at least, before you wanted to take whatever is yours anyway."

And yet this father says "if you want it, here, have it.”

"What was the younger brother's problem? The inheritance was his, he was going to get it — everything the father had was for the two sons. But no, he wanted it NOW! He wanted it on his terms. He wanted it self-centredly. He wanted all the gifts without the relationship with the father. In fact, the ultimate insult to the father was what? … that he asked for his inheritance while his father was still alive. Only hate could inspire a son to do this. The ultimate self-centredness. Yet the father in today's Gospel reading gives it to him, And what does the son do? He squanders it, he goes to a foreign land and he spends all his money at the Treasury Casino, and on picking up girls at New Farm and partying; and then guess what? … Indonesia invades Australia and there's no food, and he's got no money, and he's a long way from home.

So he finds someone and this person says "hey, listen, mate, I need someone to feed my pigs." It's a job. So here he comes, from a mansion, here he comes from wealth, here he comes from where he had everything he wanted - and he feeds pigs. And not only does he feed pigs, he lives like one. Why? Because he says "if only I could eat what these pigs eat" — that's how hungry he was. And the parallels between this man and us are phenomenal.

What does Adam and Eve do? They want their inheritance. What's the inheritance? if God is the Father then everything that God has: immortality, love, harmony, peacefulness, even an identity — all of these things He gives to us. He will gee to us. These are the things he wanted to give to Adam and Eve. These are the things He wanted to give to humanity — His own likeness, He wants people to become like Him. This scandalises a lot of non-Orthodox Christians. If the biblical teaching is nothing less, then we are all to become partakers of the divine nature, as Peter says in his Epistle: "That we are created in the image of God to achieve His likeness" — to become gods, through grace as a gift from Him. And yet we want inheritance without the relationship. Adam and Eve took their inheritance and because of their spiritual immaturity, they squandered it. They took the gifts, they tried to live by the inheritance and made a mess Of it. And so they were exiled from paradise and humanity has lived like pigs since. Because humanity continues to steal, to rape, to murder, to exploit.

Humanity continues to crush all the gifts God gave it … and itself on top! That's what it means to live like a pig. Because a pig in Jewish culture was unclean. And that's why Jesus in the parable, specifically chooses pigs. The prodigal son did the most unthinkable job for a Jew. He worked with swine, he worked with what was unclean. To show that that's how unclean he had become, to show that that's how unclean humanity has become.

And yet this guy comes to his senses. He experiences an awakening. A conversion. Something happens within him. You see, he's blessed. Because in the depth of his futile existence, he wakes up. After he's been to the Treasury Casino, after he's slept with all the prostitutes, after he's drank himself senseless, after he's smoked every drug there is on earth and injected himself with whatever is available, he still woke up — others don't. They die in that state.

He wakes up and says "hang on a sec, at Dad's place the people who are the servants, the hired servants, the slaves of the household — these people have more than enough bread to fill their stomachs. And here I am living like a pig!"

And so he comes to his senses, which means what? When he starts thinking logically, when he starts thinking rationally, when we start thinking rationally, when we start thinking logically, we turn to God. When we come to our senses, we come to our Father in heaven, and we too think "hang on a sec, God promises all these things — bread — heavenly bread — the Eucharist. He promises safety, salvation. He promises eternal life, regardless of the suffering that we go through in this world — sometimes because of the suffering we go through in this world." And the person that comes to his senses and the person who thinks rationally and logically goes to God the Father and says "Father I have sinned against you, I have sinned against heaven. I have sinned before my brothers and sisters — forgive me. If you have something in your mercy give it to me." And if you feel that it can't be done for you, well, then let me tell you what this young man is called in Greek, because "prodigal" son doesn't quite get it, O Asotos Yios — the unsaveable son, And so when we turn and when we present God with our sins and we pray "Father, I too have sinned against heaven and before you", His only response can be "Bring the fatted calf and kill it so that we can eat and rejoice," Put a ring on his or her finger. Bring a robe which symbolises the gifts, or rather the fruits, of the Holy Spirit. "Put a ring on his finger" symbolises what? … That when we turn to God like that, He adopts us as sons, as daughters. And our inheritance is given to us on the way, through obedience and humility to the Father, who knows what to give us when for our salvation. Amen.

From Voice in the Wilderness, Vol 7 No 1, 1999
Greek Orthodox Archdiocese of Australia, Parish of St George,
South Brisbane, Queensland Return from Exile (The Sunday of the Prodigal Son)

Return from Exile (The Sunday of the Prodigal Son)
A man who has never had that experience, be it only very briefly, who has never felt that he is exiled from God and from real life, will never understand what Christianity is about. Instruction on the Sunday of the Prodigal Son. On Repentance
St. Ignatius (Brianchaninov)
According to the holy fathers, the younger son could also be an image of all fallen mankind and of every sinner. The younger son’s inheritance is God’s gifts, with which every person is endowed, especially Christians. The most supreme gifts of God are the mind and heart, and especially the grace of the Holy Spirit given to every Christian. The Sunday of the Prodigal Son
Archpriest Andrew Phillips

The Sunday of the Prodigal Son
Archpriest Andrew Phillips
Perhaps we feel some sympathy with the elder son. After all, he never wasted his substance, he did remain loyal to the Father. The problem is that the elder son's service was a form of slavery, he did not stay with the Father out of love, but out of self-interest, in expectation of a reward. This was not love freely given, but an obligation fulfilled in the hope of the payment of the hireling.
Comments
×